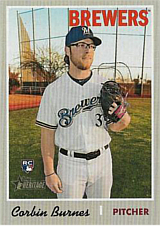 Corbin Burnes was the winner of Game 3 in the NLDS between the Milwaukee Brewers and Colorado Rockies on October 7, 2018. He faced 6 batters in the 7th and 8th inning with a 4-0 lead and retired all 6 in order. He was granted the win by the official scorer because starting pitcher Wade Miley failed to complete the required 5 innings and he had been the most effective of the five relievers used by the Brewers. Corbin had pitched earlier in Game 1 and was just as good as the Brewers swept the Rockies in three games. In the regular season, he had gone 7-0, 2.61 in 30 relief appearances after making his debut on July 10th, forming part of a shutdown bullpen also comprising Josh Hader, Corey Knebel, Jeremy Jeffress and Joakim Soria. He got rocked in 2019, pitching 32 games (4 starts) while finishing 1-5 with an 8.82 ERA.

The Brewers did not know what to expect from Burnes coming into the 2020 season, given his roller coaster first two seasons, but he turned out to be their best starting pitcher in that abbreviated year. After having been homer-happy in 2019, with 17 gopher balls in 49 innings, he was one of the stingiest pitchers in the National League that season, yielding only one long ball over his first 56 innings. He was finding success thanks to a new cut fastball that was downright nasty, making him "a whole different pitcher" in the words of catcher Jacob Nottingham. In 12 games, including 9 starts, he went 4-1, 2.11 with 88 strikeouts in 59 2/3 innings. He received consideration in the Cy Young Award voting, finishing 6th, but did not appear in the postseason as the Brewers made a quick exit.

In his first three starts of the 2021 season, he had 30 strikeouts and no walks. In his fourth start, a 6-0 win against the San Diego Padres on April 20th, he struck out another 10 batters and walked none to improve his already amazing K/W ratio to 40/0. No starting pitcher had ever started a season with that many strikeouts before walking anyone, and no pitcher had ever had a four-game stretch with 40 strikeouts and no walks at any time during a season. He was also leading the majors in ERA at 0.37. The previous record holder for most strikeouts without a walk was Adam Wainwright, with 35 in 2013, and the all-time mark for all pitchers, was held by Kenley Jansen with 51 in 2017. He moved closer to Jansen's mark on April 26th, when he added 9 more strikeouts and did not walk anyone in what turned out to be an 8-0 loss; his ERA rose to 1.53 in the loss. He then went briefly on the injured list when he tested positive for COVID-19, albeit asymptomatically, but on his return on May 13th, he got 4 quick strikeouts against the St. Louis Cardinals, still without walking anyone, to break Jansen's record. He eventually increased his total to 58 before finally issuing a walk, to Tommy Edman, in the 5th. With that he broke a second record, for most consecutive strikeouts without a walk, which had been set by Curt Schilling in 2002 and was tied earlier that week by the New York Yankees' Gerrit Cole with 56 - a streak that was still active for Cole when Burnes broke it. Unfortunately, the Brewers' hitters once again failed to back up Corbin's strong pitching, and he left trailing 1-0 and was eventually charged with a loss, falling to 2-3 in spite of an ERA of 1.57. He did not hold the consecutive strikeout record for long, as on May 17th Cole struck out 5 batters before issuing a walk, taking back sole possession of the record with 61. He was named an All-Star for the first time and was the only pitcher to go more than one inning in the game, pitching the 2nd and 3rd for the National League after taking over for Max Scherzer. He was charged with the loss after giving up 2 runs.

On August 11th, he tied a major league record by striking out 10 consecutive batters in a 10-0 win over the Chicago Cubs. He struck out the side in the 2nd, 3rd and 4th innings, then struck out Frank Schwindel, who had been his first victim, to start off the 5th before Matt Duffy hit a single. He tied Aaron Nola of the Philadelphia Phillies, who had accomplished the feat on June 25th, and Hall of Famer Tom Seaver, who had done it in 1970. He ended up striking out 15 batters in 8 innings - and needed just 99 pitches to do so. On September 11th, he combined with Josh Hader to pitch the record-breaking 9th no-hitter of the major league season, a 3-0 win over the Cleveland Indians. He was perfect into the 7th inning and struck out 14 batters in 8 innings before turning the ball over to Hader, after having made 115 pitches. It was only the second no-hitter in Brewers history, the first having been thrown by Juan Nieves back in 1987. He ended the season at 11-5, 2.43 in 28 starts, with 234 strikeouts and just 34 walks in 167 innings. He won the league's ERA title. In the postseason, he started Game 1 of the Division Series against the Atlanta Braves on October 8th and was credited with Milwaukee's 2-1 win after pitching six scoreless innings. However, the Brewers lost the next three games and Corbin never got to start again. After the season, he was voted the winner of the 2021 National League Cy Young Award.

In 2022, he quickly made it clear that he would not start the year with another long walkless streak, as he gave a free pass on five pitches to the first batter he faced on Opening Day, April 7th, Rafael Ortega of the Chicago Cubs. He gave up 3 walks in 5 innings and was not involved in the decision.