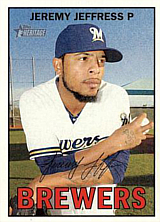 Pitcher Jeremy Jeffress was selected by the Milwaukee Brewers in the first round of the 2006 amateur draft. He was scouted by Tim McIlvaine in his first year of scouting for the Brewers. Jeremy had gone 9-1 with a 0.44 ERA as a high school senior, with 121 strikeouts and 22 hits in 64 innings. Baseball America named him a first-team high school All-American, alongside fellow pitchers Clayton Kershaw, Kasey Kiker, Colton Willems and Brett Anderson. He had been timed at 99 mph on his fastball. He signed for a $1,550,000 bonus and made his pro debut that year with the AZL Brewers, where he went 2-5 with a 5.88 ERA in 13 appearances. Despite his numbers and thanks to his fastball hitting 100 mph at times, Baseball America rated him the Arizona League's #2 prospect after Hank Conger and just ahead of Cedric Hunter, the MVP.

With the 2007 West Virginia Power, Jeremy was 9-5 with a 3.13 ERA and 95 strikeouts in 86 1/3 innings. He allowed a .201 average but walked 44 and led the South Atlantic League with five balks. On August 30, he was suspended for 50 games for violating the Minor League Drug Treatment and Prevention Program after testing positive for marijuana. Baseball America did not rate him as one of the SAL's top 20 prospects but did rank him 4th among Milwaukee farmhands. The hard-throwing right-hander slumped in 2008 with the Brevard County Manatees (4-6, 4.08 despite 102 K in 79 1/3 IP) and Huntsville Stars (2-1, 5.52). He was still named Brewers Minor League Pitcher of the Year. Baseball America listed him as the #4 Milwaukee prospect again as well as #4 in the Florida State League (behind Rick Porcello, J.P. Arencibia and Logan Morrison).

Jeffress made his major league debut with the Brewers in 2010. In his first outing, he entered with a 6-1 deficit in the bottom of the 8th against the Cincinnati Reds. He gave up a leadoff single to Miguel Cairo but Paul Janish grounded into a double play and Ryan Hanigan grounded out to end the frame. He pitched 10 games that season, with 1 win and a 2.70 ERA in 10 innings.

In December 2010, Jeffress was traded to the Kansas City Royals with Alcides Escobar, Lorenzo Cain, and Jake Odorizzi for Zack Greinke, Yuniesky Betancourt and cash. He spent most of the 2011 season in the minors, going 1-3, 4.26 in 9 games for the AA Northwest Arkansas Naturals and 2-3, 7.12 in 16 games for the AAA Omaha Storm Chasers. He served another suspension for dabbling with marijuana, and in his brief appearances in the majors, failed to impress much, with a record of 1-1, 4.70 and a save in 14 appearances, during which he managed to walk 11 batters in 15 1/3 innings. He was back in the minor leagues again for most of 2012, going 5-4, 4.97 in 37 games for Omaha, also pitching once for Northwest Arkansas. He continued to struggle with his control in his 13 appearances out of the Royals' bullpen, as he walked 13 batters in 13 1/3 innings, contributing to an ERA of 6.75. He also ran into more off-field trouble, being arrested for domestic assault and criminal damage. Although the charges were eventually dropped, he was ordered to issue a formal apology and perform 20 hours of community service for disorderly conduct. After the season, the Royals sold his contract to the Toronto Blue Jays on November 8th.

Jeffress made the Jays' staff out of spring training in 2013, but his stay with the big league team was short-lived. In his first appearance of the year on April 5th, he gave up a run on a a solo homer by Will Middlebrooks, then issued a pair of walks in one inning of relief in a 6-4 loss to the Boston Red Sox. He was designated for assignment after the game, making way for veteran David Bush to make his return to the big leagues. He had some good results with the AAA Buffalo Bisons, going 1-0, 1.65 in 25 games with 7 saves, earning him another look with the big league club at the end of the season. He pitched 9 times in September and did not give up an earned run, finishing with an ERA of 0.87. Jeffress again made the Jays' staff out of spring training in 2014, but despite his strong performance at the end of the previous season, he only lasted three games before the Blue Jays gave up on him. He gave up four runs in 3 1/3 innings and requested free agency instead of an assignment to the minor leagues on April 16th.

He soon signed a contract with his original organization, the Milwaukee Brewers. After spending some time in AAA, he pitched 29 times with the Brewers, with good results - a 1-1 record coupled with a 1.88 ERA in 28 2/3 innings. He made the Brewers' staff out of spring training in 2015, this time with the firm intention to remain there for the whole season. Indeed, he turned a corner that year, pitching 72 times out of the bullpen with a 5-0 record and a 2.65 ERA and striking out 67 batters in 68 innings. That solid performance gave him a shot at the Brewers' closer job in 2016 and he seized the opportunity without looking back, saving 27 games by the end of July. He was 2-2, 2.22 in 47 outings on August 1st when he was traded to the Texas Rangers, alongside C Jonathan Lucroy, in return for two prospects, OF Lewis Brinson and P Luis Ortiz.

Shortly after joining the Rangers, Jeffress was arrested and held in jail overnight in Dallas, TX on suspicion of DWI. Police also found a marijuana-like substance in the vehicle. As a result of the incident, the Rangers put him on the restricted list on August 26th. He was reactivated on September 23rd and went 1-0, 2.70 in 12 games for Texas. He then pitched one inning in the ALDS against the Blue Jays, giving up an unearned run. His DUI case was only resolved over a year later, in January 2018, when he pleaded guilty. He was sentenced to three days in jail, with credit for time served. Meanwhile, his 2017 season was marked by the reverse of the journey he had undertaken in 2016, i.e. he started with the Rangers and ended the year in Milwaukee. He went 1-2, 5.31 in 39 games for Texas, then on July 31st was traded to the Brewers in return for minor leaguer Tayler Scott. He did much better with the Brew Crew, going 4-0, 3.65 in 22 games, including his first career start. This came on September 15th against the Miami Marlins, as the Brewers tried to compensate for an injury to ace Jimmy Nelson by giving the start to a group of relievers, Jeffress assuming the first two-inning shift. Seven more pitchers saw time on the mound in that game, which Milwaukee won, 10-2, both Miami runs having been scored off Jeremy.

Jeffress followed his solid second half in 2017 with a great first half for the Brewers in 2018. Serving as a set-up man for closers Corey Knebel and Josh Hader, he put up an ERA of 0.99 in his first 44 appearances with a 6-1 record, 3 saves and over a strikeout per inning. He was named to the All-Star team for the first time, as a replacement for the injured Sean Doolittle, joining Hader as one of five representatives for the first-place Brewers. He finished his dream season with a record of 8-1, 1.29 and 15 saves in 73 games, with the Brewers putting up the best record in the National League. He did not do as well in the postseason, as Milwaukee went all the way to Game 7 of the NLCS before being eliminated by the Los Angeles Dodgers, as he gave up 6 runs in 8 innings with a loss and a save.

He could not follow up his great season in 2019, as he was bothered by weakness in his shoulder in spring training and started the season on the injured list. He was activated on April 16th after a brief rehabilitation assignment in the minors, but never found his groove as he went 3-4, 5.02 in 48 games, with 1 save. On August 25th, he returned to the injured list with a hip problem, and on September 1st he was designated for assignment, joining another of the heroes from the previous campaign, Jhoulys Chacin, who had been let go a day before as the Brewers shed some dead wood in order to make a final, difficult push to return to the postseason.

Somehow, Jeremy managed to not only land on his feet, but return to prominence in 2020, this time with the Chicago Cubs, with whom he signed as a free agent on February 1st. He pitched 22 times during the pandemic-shortened season, going 4-1 with a 1.54 ERA as he took over as the team's closer from a struggling Craig Kimbrel and recorded 8 saves, 6th most in the National League. He allowed just 10 hits in 23 1/3 innings, and while he still issued a lot of walk with 12, he also struck out 17. However, he struggled in his first outing of the postseason, facing the Miami Marlins in Game 1 of the Wild Card Series on September 30th. He replaced Kyle Hendricks with one out in the top of the 7th after he had just given up a three-run homer to Corey Dickerson, but was unable to keep the game close as the first two batters he faced, Starling Marte and Jesus Aguilar singled and homered to make the score 5-1. He retired the next three batters, but the damage was done. He also pitched in Game 2 and gave the Cubs a scoreless 9th inning in relief of Yu Darvish and Kimbrel, but the Cubs were unable to score and lost the game and the series, 2-0.

He signed with the Washington Nationals at the start of spring training in 2021 but was released a week later for what the team called "personal reasons" after not appearing in a game.