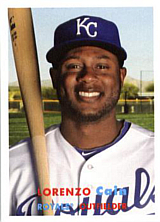 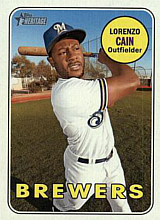 Lorenzo Cain is a two time All-Star who is known for his elite defensive skills. He was the 2014 ALCS Most Valuable Player based not just on his electric bat but also his glovework, winning a ring the following season with the Kansas City Royals. A winner of Wilson Defensive Player of the Year and Fielding Bible Awards, he was finally rewarded with his first Gold Glove in 2019.

Cain was chosen by the Milwaukee Brewers in the 17th round of the 2004 draft out of high school as a draft-and-follow. He showed enough the next year in junior college that scout Doug Reynolds signed him. He hit .356/.418/.566 for the AZL Brewers and went 5 for 24 for the Helena Brewers, winning Arizona League MVP honors after leading in slugging, runs scored (45, tied with Antoan Richardson), hits (73), extra-base hits (28), doubles (18) and total bases (116) and was second to Ariel Nunez in slugging. Baseball America ranked him the league's #8 prospect, third among position players. Lorenzo hit .307/.398/.425 for the 2006 West Virginia Power. He scored 91 runs, banged 36 doubles and stole 34 bases in 45 tries. He led Milwaukee minor leaguers in hits (178) and doubles and also finished 4th in the South Atlantic League in average and doubles, led in hits, tied Michael Mooney for most outfield assists (15) and turned the most double plays of any outfielder with 6. His 11 errors were one shy of the lead for SAL outfielders, though. Baseball America rated him the SAL's #14 prospect, right behind Clay Buchholz. Cain then joined the North Shore Honu of the Hawaii Winter League and hit .231/.274/.308 with 12 steals in 13 tries. He finished 4th in steals behind Nyjer Morgan, Eric Young Jr. and Darren Ford. In 2007, Cain fell to .276/.338/.334 with the Brevard County Manatees. He did have 274 putouts, leading Florida State League outfielders.

That got him his shot at the big leagues, replacing Doug Davis on the roster when Davis went on the disabled list. Cain made his MLB debut as a pinch-hitter for Kameron Loe on July 16, 2010 and lined out against Jesse Chavez of the Atlanta Braves. Two days later, he singled off Michael Dunn for his first hit. He went 3 for 5 but was demoted back to Nashville when Yovani Gallardo came off the DL. He was back after the Brewers traded veteran center fielder Jim Edmonds to the Cincinnati Reds at the trading deadline, and hit .306 in 43 games for Milwaukee. After the season, he was packaged along with shortstop Alcides Escobar, pitcher Jeremy Jeffress and pitcher Jake Odorizzi to the Kansas City Royals in return for ace Zack Greinke and infielder Yuniesky Betancourt.

Cain spent most of 2011 in AAA with the Omaha Storm Chasers. In 128 games, he hit .312/.380/.497 with 28 doubles, 7 triples and 16 homers, confirming his readiness to take the next step. But there was no immediate opening in Kansas City with Melky Cabrera playing very well in center field. As a result, Cain only played in 6 big league games, hitting .273. After the season, the Royals traded Cabrera to the San Francisco Giants, opening a spot in their lineup for Lorenzo in 2012. He started slow as a big leaguer in K.C., playing 61 games in 2012 while batting .266 with 10 steals. In 2013, he started out as the man in center field before eventually ceding more and more time to backup Jarrod Dyson. An oblique injury ultimately limited him to 115 games, hitting .251 with 54 runs scored and 14 stolen bases.

It was 2014 when all the pieces of Cain's game together. He batted .301 in 133 games, scoring 55 runs and stealing 28 bases while routinely making highlight reel worthy catches patrolling center field. The Royals reached the postseason for the first time in 29 years and it was Lorenzo's time to shine. He drove in 2 runs during Kansas City's Wild Card Game victory against the Oakland A's, but only hit .154 as the Royals sent the Los Angeles Angels home in the ALDS. In the 2014, his bat and glove formed one helluva one-two punch. In Game 2, he robbed J.J. Hardy of the Baltimore Orioles of extra bases with a spectacular grab to preserve a 4-4 tie in the 6th inning. At the plate, he was 4-for-5, tying a franchise record for most hits in a postseason game established by the great George Brett. He drove in one of two runs in the 9th to seal a 6-4 victory. The Royals swept the O's, with Cain hitting a video game-esque .533/.588/.667 en route to MVP honors. He continued to make unbelievable grabs in the World Series, depriving the San Francisco Giants of extra bases and runs with at least three plays while contributing to force the decisive Game 7 with a 2-for-3, 3 RBI night in a 10-0 Game 6 blowout. Unfortunately, the Giants prevailed, 3-2, in the winner-take-all game, Lorenzo only going 1-for-4 at the plate with a strikeout.

The Royals came into 2015 thinking about unfinished business and were serious postseason contenders for the first time in a dog's age. Before they could try their luck at the postseason minefield again, first, it was time for Lorenzo to reach a new level with his game. He posted a career best slash line (at the time) during the season, hitting .307/.361/.477 in 140 games while establishing personal bests (that he has not topped) in doubles (34), triples (6), home runs (16), RBI (72) and runs scored (101). His defense remained magnificent and he made his first All-Star Game appearance, going 2-for-3 with a double and an RBI in a 6-3 victory for the junior circuit. The Royals won their division for the first time in three decades and Lorenzo contributed in each of the rounds, hitting .250 in the ALDS with a home run as they dispatched the Houston Astros, then batting .300 with 5 RBI as K.C. made it back-to-back trips to the World Series with a six-game series win against the Toronto Blue Jays in the ALCS. Though he only hit .227 in the Fall Classic, Lorenzo drove in 4 runs in the five-game series, with 3 of them coming in the 7-2 Game 5 victory to take the series against the New York Mets, clinching it at Citi Field.

Lorenzo spent two more seasons in Kansas City, missing time with injury and playing only 103 games in 2016 before putting together a .300 season in a career-best 155 games in 2017, cracking 15 home runs and stealing 26 bases while scoring 86 runs. The Royals were on the fast track back to irrelevance in the AL Central and no serious effort was made to lure Cain back into the fold when he became a free agent after the season. So he returned to his old haunts, agreeing to a five-year, $80 million deal to go back to Milwaukee. He was an All-Star on his return, hitting .308 with a .395 OBP, walking 71 times, while stealing 30 bases and scoring 90 runs. He batted .303 in the 2018 NLCS but the Crew was unable to push past the Los Angeles Dodgers in the crucial 7th game. Lorenzo still brought it with the glove in 2019, finally winning a Gold Glove many had felt was long deserved, but took a big step back with the bat, batting only .260 in 148 games, with his first sub-.400 slugging percentage since his injury-addled 2013 season. The Brewers made it back to the postseason, but bowed out after losing the Wild Card Game to the Washington Nationals as Lorenzo went 1 for 4 in the loss.

He played the first five games of the 2020 season with the Brewers, going 6 for 18 with a double, 4 runs scored and 2 RBIs, but on August 1st he announced that he would sit out the remainder of the season out of health and safety concerns. He explained that as the father of three young children, he did not want to take any chances on that score, and that when the Brewers had to postpone a couple of scheduled games due to positive COVID-19 tests among members of the St. Louis Cardinals, it drove home the point that there were significant risks in playing the season. He returned to action in 2021, and hit .257 in 78 games, with 8 homers and 36 RBIs. He played in the postseason one final time as he went 3 for 13 in the Brewers' loss to the Atlanta Braves in the Division Series. But he struggled badly in 2022, batting just .179 in 43 games, with an OPS+ of 32. He was designated for assignment on June 18th. The Brewers could have acted sooner, but they decided to keep him until the 10th anniversary of his first call-up, to ensure that he accrued full major league pension rights. He had apparently agreed with the team beforehand about this outcome and was expected to announce his retirement in short order.