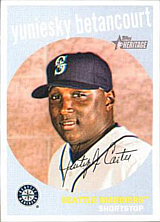 "I was really scared in the middle of the sea, and everything was pitch black, and I remember not knowing if I would ever make it." - Yuniesky Betancourt, about being dropped off at a Bahamian beach for several days, in an effort to avoid the US Coast Guard in 2003 while he was leaving Cuba to try for the USA

Yuniesky Betancourt has played in Cuba, the US and Japan. He hit .429 and scored 9 runs for Cuba when they won Bronze in the 2000 World Junior Championship. He was signed in 2005 after defecting from Cuba, then played in Double A, Triple A, the Futures Game and in the majors for 60 games in his first season. After spending 2005 to 2008 and part of 2009 with the Seattle Mariners, he played with the Kansas City Royals and Milwaukee Brewers. In 2006, he was the starting shortstop for the Seattle Mariners, hitting .289 with 11 stolen bases, 8 homers and 6 triples. He continued to be the starting shortstop in 2007 and 2008.

In 2009, Betancourt was acquired midseason by the Kansas City Royals as a replacement for shortstop Tony Pena Jr., a player who posted very poor offensive numbers in the first half of that year. He was the Royals' starting shortstop in 2010 then, after the season, was traded to the Milwaukee Brewers, with ace pitcher Zack Greinke, in return for four prospects. He became the Brewers' starting shortstop in 2011. He returned to the Royals for the 2012 season as a free agent. He played mostly second base before they designated him for assignment on August 5th, when he was hitting .228 with 7 homers and 36 RBI in 57 games. He went to spring training with the Philadelphia Phillies in 2013, where he competed for a utility infielder job with Kevin Frandsen and Freddy Galvis, but was released at his request before the end of spring training when it became clear that he would not make the team. Betancourt was immediately signed by the Brewers, who gave him a one-year contract, in what was his final big league season. He signed with the Orix Buffaloes for 2014. He started at second base and hit cleanup on Opening Day but went 0 for 6, flying out against Mitsuo Yoshikawa his first trip up. He spent the 2015 season in the Mexican League. In 2019, Yuniesky became the first former MLB player to repatriate and return to the Cuban national baseball system.

Everywhere he played, he posted decent batting averages with some power, but with poor on-base percentages that made him a below-average offensive player. Ratings of his defensive prowess differed widely: he made a number of spectacular plays and showed better-than-average range factors, but was always among the league leaders in errors committed, so that some advanced defensive metrics rated him below average overall.

He had a dramatic saga coming to the US, as he was smuggled in by boat in 2003, driven to L.A. went back to Mexico to try to get a visa to come back legitimately to the USA, was arrested by Mexican authorities and released, and then came to the USA seeking asylum. Source: www.latinobaseball.com/hot-corner-18.php He is one of only two major leaguers to bear the name "Yuniesky" along with fellow Cuban Yuniesky Maya; he is also one of only two players to have the last name "Betancourt". The other, Rafael Betancourt, is from Venezuela.