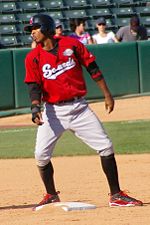 Alcides Escobar was signed by scout Epy Guerrero for the Milwaukee Brewers in 2003. He made his pro debut in 2004 and reached the major leagues at the end of the 2008 season. He is a cousin of Kelvim Escobar, Edwin Escobar, Elvis Escobar and Vicente Campos and a nephew of Jose Escobar.

In December 2010, Escobar was traded to the Kansas City Royals with Jake Odorizzi, Lorenzo Cain, and Jeremy Jeffress for Zack Greinke, Yuniesky Betancourt and cash.

Manager Ned Yost installed Escobar as the Royals' lead-off hitter late in the 2014 season, and the results were immediate, as the team went on a late run that took them all the way to Game 7 of the World Series. He returned to the job in 2015 and the Royals posted the best record in the American League that season. This was in spite of the fact that, objectively, Escobar is not a good lead-off hitter, with an OBP of only .293 in 2015. As Yost put it: "It's just the chemistry of the lineup somehow. That is kind of unexplainable to me how it works and why it works, but it does."