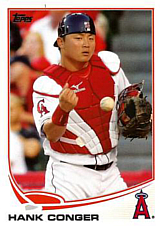 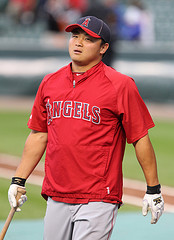 Catcher Hank Conger was a backup in parts of seven big league seasons.

He was born in the state of Washington and attended high school in Huntington Beach, CA, not far from where the Los Angeles Angels play. Hank was selected by the Angels in the first round of the 2006 amateur draft, signed by scout Bobby DeJardin and made his pro debut that summer with the AZL Angels, where he hit .319 in 19 games. He spent five seasons in the minors, typically hitting around .300 with moderate power. In the 2010 Futures Game, he won the Larry Doby Award as the MVP. Starting at catcher for the USA and hitting sixth, he lined out in his first at bat, facing Simon Castro. In the 4th inning, he flew out against Alexander Torres. In the bottom of the 5th, he came up with Mike Trout and Eric Hosmer aboard, a 2-1 US lead and two outs. Facing Henderson Alvarez, he homered to right field for the game's big blow. He was replaced at catcher by Austin Romine.

Hank made his big league debut with Los Angeles two months later in September of 2010. He was one of the catchers in the mix in 2011, sharing the workload with Jeff Mathis early, until he was sent down to the minors in mid-July. He crafted his best batting line in a career high 92 games in 2013, batting .249/.310/.403 in 233 at bats. After a regression in 2014, he was dealt in November to the Houston Astros in return for Nick Tropeano and Carlos Perez. He hit a career high 11 home runs in 2015, then spent some time with the Tampa Bay Rays in 2016.

Through 2019, the only other major league player with the last name Conger was a pitcher from the 1940s, Dick Conger.