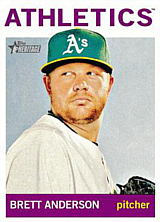 Brett Anderson is a major league pitcher. He is the son of Frank Anderson, head coach of Oklahoma State University in 2004-2012 and later the pitching coach at the University of Houston.

Anderson went 9-1 with a 1.14 ERA as a high school sophomore and 5-0 with 5 saves and a 0.68 ERA as a junior, earning All-Oklahoma honors. He played for Cincinnati's Midland Redskins and had a 0.80 ERA for them, second lowest in team history behind Mark Mulder. He also pitched for the US in the Junior Pan American Games, going 2-0 with a 0.56 ERA and 24 strikeouts in 16 innings pitched, allowing just 3 hits. He went the distance against Panama, 2-hitting them. Brett went 9-0 with a 0.37 ERA and 2 saves as a high school senior, allowing 27 hits and 9 walks in 57 innings while striking out 102. That earned him first-team High School All-American honors from Baseball America. The Arizona Diamondbacks selected Anderson in the second round of the 2006 amateur draft (55th overall) after he had been expected to go in the first round. He was signed by scout Joe Robinson for a $950,000 bonus; only Wes Hodges had a higher signing bonus among second-rounders.

Anderson split 2007 between the South Bend Silver Hawks (8-4, 2.21, 10 BB/85 K in 81 1/3 innings) and the Visalia Oaks (3-3, 4.85, .311 opponent average). Baseball America rated him having the best changeup in the Midwest League and the #3 prospect in the loop behind Clayton Kershaw and Travis Snider, right ahead of Gorkys Hernandez. Anderson would have led the MWL in ERA had he qualified but his season was cut short by a concussion from a traffic accident.

Brett was traded in the winter. The Oakland Athletics picked him up, along with Dana Eveland, Chris Carter, Greg Smith, Aaron Cunningham and Carlos Gonzalez, for Dan Haren and Connor Robertson. He began 2008 with the Stockton Ports and went 9-4 with a 4.14 ERA but struck out 80 and walked 18 in 74 innings. He was promoted to the Midland RockHounds and named to the Futures Game roster. In the 2008 Olympics, Anderson was 1-0 with a 4.98 ERA for Team USA, the Bronze Medal winners; he fanned 10 in 12 2/3 innings. He did not pitch particularly well against either Canada or Japan but got the win over Japan in the Bronze Medal game, 8-4, thanks to a US power display.

Brett made the Oakland roster out of spring training in 2009 and played his first major league game on April 10. He started well, retiring the first four batters he faced. A walk to Ken Griffey Jr. began a string of trouble as the next six batters all reached, leading to five runs. He recovered, ending the game with 5 runs in 6 innings and earning the loss against Seattle. He stayed in the A's starting rotation for the rest of the year, making 30 starts and ending the year with a record of 11-11, 4.06. He threw a shutout in his only complete game and struck out 150 in 175 1/3 innings. H only started 19 games in 2010, as he missed most of May and June with an injury. When he did pitch, he was excellent, putting up a 2.80 ERA in 112 1/3 innings, although he only went 7-6. His K/BB ratio was excellent at 75/22. He struggled in 2011, making only 13 starts, during which he went 3-6, 4.00. He allowed 14 runs in his last two starts and was shut down with pain in his elbow. Rest did not help and he underwent Tommy John surgery on July 14th, ending his season.

He made it back to the bigs 13 months later, beating the Minnesota Twins, 4-1, on August 21, 2012. He benefit from the A's turning their first triple play since 2000 in the 5th inning, with the score tied at 1. He made 6 starts for Oakland in 2012, with a record of 4-2, 2.57. He was impressive enough that manager Bob Melvin gave him the ball to start Game 3 of the ALDS against the Detroit Tigers on October 9th and he responded with an outstanding performance, giving up no runs on 2 hits over 6 innings to earn credit for a 2-0 win. Things did not go as well in 2013. He made only 16 appearances, sidelined from the start of May to the end of August because of a stress fracture in his right foot. He was 1-4 as a starter in April, with an ERA of 6.21, when he went down. He pitched exclusively out of the bullpen after his return, picking up three saves, all of them in outings of three innings, and managed to lower his ERA slightly to 6.04. He pitched once in the postseason, Game 4 of the ALDS, again facing the Tigers, but gave up a hit and a walk in a third of an inning with one of the runners coming in to score.

On December 10, 2013, the A's traded Anderson to the Colorado Rockies for two young pitchers, Drew Pomeranz and Chris Jensen. The Rockies immediately discounted Anderson's checkered medical history, saying his problems were behind him and that they were counting on him as an "impact starter" in 2014. He made only 8 starts that season, going 1-3 with an ERA of 2.91 in 43 1/3 innings. On December 31, 2014, he moved to the Los Angeles Dodgers as a free agent. He had a solid season in 2015, making 31 starts with a record of 10-9 and a 3.69 ERA. He was tagged to start Game 3 of the NLDS against the New York Mets on October 12th but was rocked for 6 runs in 3 innings and charged with a 13-7 loss. He was a potential free agent again after the season, but accepted a qualifying offer from the Dodgers and re-signed for one year. Just when it looked like he had his career back on track, the injury bug hit him once again in spring training in 2016. He felt a strain in his back and tests revealed a bulging disk. He underwent arthroscopic surgery on March 3rd and made his first appearance on August 14th, facing the Pittsburgh Pirates. He lasted but one inning, during which he gave up five runs and was charged with an 11-3 loss. He made another start on August 20th, but he gave up 9 runs in 3 innings against the Cincinnati Reds. He went back on the disabled list on August 23rd, then made two more appearances in late September, which were more successful. He finished 1-2, 11.91, and did not pitch in the postseason.

On January 26, 2017, he signed a one-year contract with the Chicago Cubs worth $3.5 million with significant performance bonuses. The Cubs were looking at him as their potential fifth starter - if healthy. He did not let them down in spring training, as he claimed the job with a solid performance. He earned his first win against his former team, the Dodgers, on April 13th, by a 4-0 score. It was pretty much all downhill from there. While he was solid in April, going 2-0, 3.54, he was beaten around his next two starts, allowing 12 runs in just 1 2/3 innings, as his ERA jumped to 8.18. He was placed on the disabled list with a lower back strain on May 7th and designated for assignment when he came off in July to make room for newly acquired José Quintana. He signed with the Toronto Blue Jays on August 18th, and after a couple of appearances in AAA with the Buffalo Bisons, returned to the Show on August 29th. He pitched well in a start against the Boston Red Sox, giving up just a run in 5 2/3 innings, but unfortunately for him he was matched up against Chris Sale on one of his dominating days, and ended up charged with a 3-0 loss. Brett returned to Oakland in 2018 on a minor league pact, on the eve of the 2018 season. He pitched well enough to earn a big league deal with incentives for 2019, a season he finished with the lowest strikeout percentage of all big league pitchers (12.1%). In December, he signed a big league deal with the Milwaukee Brewers.

In addition to his baseball-related health issues, Anderson suffers from obsessive-compulsive disorder and has a large number of small repetitive routines he must perform to feel comfortable. He explains that he chose the right profession for his disease, since baseball players are known to have similar traits, such as elaborate pre-at bat routines. He describes himself as "not very outgoing", and as a result teammates may not know that anything about him is unusual.