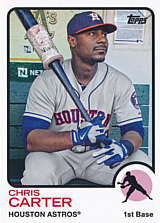 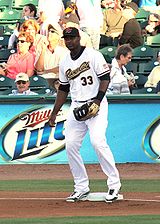 In 2016, first baseman Chris Carter tied for the NL lead in home runs, belting 41 with the Milwaukee Brewers. The following season was, somehow, his last.

Carter was signed by the Chicago White Sox and scouts George Kachigian and Joe Butler as a 15th round pick in 2005. He made his debut with the Bristol White Sox, hitting .283/.350/.485 while leading the team with 10 home runs and 37 RBI. One problem was a .222 average against left-handers as he had a reverse platoon split. He led the Appalachian League with 7 sacrifice flies. He spent the majority of the next season, 2006, with the Great Falls White Sox and hit .299/.398/.570 while leading the Pioneer League with 15 homers. He tied Chris Valaika for the lead with 143 total bases, finished second in slugging to Danny Dorn, and led league first basemen in putouts (558), errors (16) and double plays (62). He was rated the league's 14th best prospect by Baseball America, one spot behind Valaika, and was the league's All-Star first baseman. He was with the Kannapolis Intimidators in 2007 and batted .291/.383/.522 with 25 home runs and 93 RBI, leading White Sox farmhands in the latter two departments. Baseball America rated him the best power prospect and 10th best overall prospect in the South Atlantic League after he finished third in homers and tied for third in RBI. He was named to the SAL All-Star team at DH.

Following that season, Carter was traded to the Arizona Diamondbacks for Carlos Quentin. Arizona then shipped him to the Oakland Athletics, with Carlos González, Aaron Cunningham, Brett Anderson, Dana Eveland and Greg Smith, for Dan Haren and Connor Robertson. Carter set the Stockton Ports team record when he hit his 32nd home run in early August 2008. He was named A's Minor League Player of the Year, pacing their minors in runs scored (101), total bases (268), homers (39) and slugging (.569). He hit .259 with a .361 OBP for the season and drove in 104 runs, leading the California League in runs scored, slugging, total bases, extra-base hits (75), home runs, RBI and strikeouts (156). He launched five more homers in the playoffs, including a grand slam in the finale, to help Stockton win the league title. He was named the league's All-Star DH, but did not take MVP honors, which went to Carlos Santana. Baseball America labeled him the best power prospect and the 14th-best prospect in the Cal League, right behind another high-strikeout slugger, Greg Halman of the Netherlands. Overall, he tied Freddy Guzman for 4th in the affiliated minors in runs scored, led in total bases, led in extra-base hits (two ahead of Ernesto Mejia) and tied Mike Stanton for second in homers (three behind Dallas McPherson).

Carter continued to rake in 2009 with the Midland Rockhounds, hitting .337/.435/.576 with 41 doubles, 24 home runs (two behind Chad Tracy for the league lead), 82 walks, 108 runs scored and 101 RBI, showing contact to go with the power. Moving up to the Sacramento River Cats, he hit .259/.293/.519 with 4 homers and 14 RBI in 13 late season games. He was again the A's Minor League Player of the Year, leading the chain in runs scored, hits (179), total bases (310), doubles, RBI (115), walks (85), OBP (.422) and slugging (.570). He led the Texas League in OBP, slugging, OPS, total bases (282), extra-base hits (67), doubles, walks, fielding percentage at first base (.993) and double plays by a first baseman (107). Carter was named to the league's All-Star team at first base and earned MVP honors. Baseball America rated him the TL's third best prospect behind Mat Latos and Justin Smoak, ahead of Jhoulys Chacin and Brett Wallace; they also named him the league's best batting and power prospect. In the affiliated minors, Carter was third in runs scored (behind Jon Gaston and Eric Young Jr.), led in hits (four ahead of Jack Shuck), tied Gaston for the most total bases, was second to Koby Clemens in RBI and tied for third with 11 sacrifice flies. In the 2009 Futures Game, he hit cleanup and manned first base for the US, batting between Wallace and Pedro Alvarez. Chris lined back to Neftali Feliz in the 1st, popped up against Francisco Samuel in the 3rd, struck out against Luis Pérez in the 5th and drew a walk from Chia-Jen Lo in the 6th.

Baseball America rated Chris the 28th best prospect in baseball entering 2010. He began in Sacramento and hit .262/.368/.531 with 27 homers and 89 RBI in 113 games. He was third in the PCL in RBI behind Mark Trumbo and Micah Hoffpauir and was tied with Trumbo and Brad Eldred for second in homers behind J.P. Arencibia when Oakland called him up. The big man debuted in left field, hitting 7th, and struck out twice against Doug Fister before grounding out against Sean White. He began his big league career rough, 0 for 33, two at-bats shy of tying Vic Harris for the worst start by a position player since the Deadball Era. He finally connected with a single off Scott Linebrink in late September, then raised his average to .186 in 24 games. He had no such luck in 2011, as he hit only .136 in 15 major league games. He played only 75 games at Sacramento, as his season was interrupted by an injury and a subsequent rehab stint in the California League. With the RiverCats, he hit .274 with 18 homers in 296 at bats. He did better in 2012, as he hit .239 with 16 homers and 39 RBI in 67 games with Oakland, playing exclusively at first base. Despite the low batting average, his OPS+ was an excellent 139, thanks to his power and a solid .350 OBP in a difficult hitting environment.

On February 4, 2013, he was involved in a major trade for the third time of his career, this time heading to the Houston Astros, along with pitcher Brad Peacock and catcher Max Stassi, for shortstop Jed Lowrie and pitcher Fernando Rodriguez. Chris became a regular in 2013, playing 148 games, without a regular position, splitting his time between first base, left field and DH in roughly equal amounts. He hit only .223 and led the American League with 212 strikeouts, but he kept a place in the starting lineup because he was the only Astro to hit for consistent power, slugging 24 doubles and 29 homers and driving in 82 runs for the last-place team. The next season, Carter went on a home run tear after the All-Star break. He had a decent first half in 2014, at least in terms of power, as he hit 12 doubles and 19 homers despite a batting average of only .205, then hit two more homers the rest of July. August was a different story. He connected 11 times in his first 24 games to suddenly place himself in the top 3 in home runs in the AL. He was now almost a full-time DH, only making occasional starts at first base and in left. He finished the year with a new career-high 37 homers and 88 RBI in 145 games, although his batting average was only .227 and he struck out 182 times. In 2015, he moved back to first base almost full-time as newly acquired Evan Gattis was the team's DH. He played 129 games for the suddenly competitive Astros, and while his batting average sank even further, to .199, he continued to contribute some power with 24 homers and 64 RBI. He started the Wild Card Game against the New York Yankees and drew a walk in all three of his plate appearances, then went 5 for 17 with a double and a homer in 5 games in the Division Series when the Astros were eliminated by the Kansas City Royals. After the season, the Astros declined to make him a contract offer before the December 2nd deadline, making him a free agent.

On January 6, 2016, Carter signed a one-year deal with the Milwaukee Brewers for $2.5 million. He had another all-or-nothing season, playing 160 games as the starting first baseman and belting 41 homers, a career best and the most in the NL, tied with Nolan Arenado. But Chris also struck out a league-leading 206 times and batted only .222. He did draw 76 walks, giving him a decent OBP of .321 and an OPS+ of 114. The Brewers were not willing to commit to Carter given uncertainty about his future performance and a likely salary increase. On November 29th, they decided to have him designated for assignment while announcing the signing of Eric Thames, coming back from three successful seasons in the Korea Baseball Organization. Ordinarily, a slugger of Chris' caliber would not wait long to be obtained as a free agent. But this was no ordinary winter... On February 7, 2017, Carter finally found a new home, signing a one-year deal with the New York Yankees for $3.5 million. He was the Yankees' main starter at first base in the first half, taking advantage of an injury to Greg Bird. He hit .201 in 62 games, with 8 homers and 26 RBI. Had the Yankees not been racked by injuries, he would likely not have seen as much playing time, but the team had little choice but to play him, even though he often batted in the 9th position, an unusual spot for a player of his pedigree. His contact issues were out of control, however, as he struck out 76 times in 184 at bats, against only 37 hits. On July 10th, the Yankees released him, with Ji-Man Choi being given a chance to play with Bird and Tyler Austin both injured. At 30, Chris' big league career was suddenly over.

Chris caught on with Oakland eleven days later and finished the year in AAA with the Nashville Sounds where he hit .252 with 9 homers and 22 RBI in 36 games. In 2018, he signed a minor league contract with the Los Angeles Angels, who had just let go their starting first baseman, C.J. Cron. He was sent to the minors to start the year and hit .255 with 13 homers and 43 RBI in 38 games for the Salt Lake Bees. On May 22nd, the Angels sent him to the Minnesota Twins in return for future considerations. He was assigned to the Rochester Red Wings and ultimately released in July. He found a new lease on life south of the border in 2019, leading the Acereros de Monclova of the Mexican League to a league championship. Chris put up a video game like .293/.449/.709 slash line, with a league leading 49 home runs and 119 RBI, scoring 116 runs in 120 games.