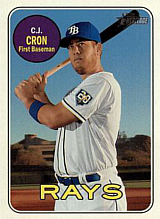 The son of big leaguer Chris Cron and brother of Kevin Cron, first baseman C.J. Cron has belted 114 home runs in six seasons, including a 30 home run season for the Tampa Bay Rays.

C.J. was originally selected by the Chicago White Sox in the 44th round of the 2008 amateur draft. He opted to attend college and was an All-American in 2010 with the Utah Utes. He was later chosen by the Los Angeles Angels of Anaheim with the 17th overall pick in the 2011 amateur draft. He signed with scout John Gracio on June 28th, the club not extremely concerned by an MRI which revealed a labral tear in his right shoulder. He was sent to the Orem Owlz of the Pioneer League to begin his career, spending each of the next three seasons in the minors.

With the signing of Shohei Ohtani, Cron was the odd man out after the 2017 season. On February 17, 2018, he was traded to the Tampa Bay Rays for a player to be named later (Luis Rengifo) and immediately installed as starting first baseman. He had his most powerful season to date, hitting .253/.323/.493 in 140 games with 30 homers, 28 doubles and 74 RBI. His OPS+ was an excellent 123, and he was a big reason the Rays exceeded all expectations and won 90 games, even if most reporting focused on their unconventional use of starting pitchers. He became eligible for salary arbitration after the season and was in line for a big raise, which defeated the purpose of the Rays having acquired him, as they were seeking low-cost production. So he was placed on waivers and claimed on November 25th by the Minnesota Twins. Cron had a solid season for the Twins in 2019 as their starting first baseman, hitting .253/.311/.469 in 125 games with 25 homers and 78 RBI as the Twins won over 100 games and set an all-time record for homers hit. He went 1-for-5 in the Division Series, in which the Twins were swept by the New York Yankees, then became a free agent on December 2 when Minnesota declined to offer him arbitration. On December 21, he signed a one-year deal with the Detroit Tigers for $6.1 million.