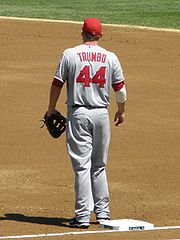 Mark Trumbo topped 30 minor league home runs in 2008 and 2010, then made the majors the latter year.

Trumbo was a Baseball America second-team All-American in 2004 as a high school senior, going 10-2 with a save and a 2.20 ERA with 89 K in 73 innings while hitting .421 with 9 homers in 88 AB. The Anaheim Angels drafted him as a right-handed pitcher in the 18th round of the 2004 amateur draft. He signed with scout Tim Corcoran of his hometown team for $1.425 million instead of following through with his scholarship to the University of Southern California.

By the time Trumbo made his pro debut with the 2005 Orem Owlz, though, he was a position player, hitting .274/.322/.458 with 10 homers and 23 doubles in 299 AB. He tied Dallas Morris for the most doubles in the Pioneer League, led in at-bats and was second to Morris in extra-base hits, 35 to 34. He also led the league's first basemen in putouts (706) and double plays (57). He helped his team take the pennant. He failed to win All-Star honors but Baseball America did rate him as the league's #14 prospect, best of any first baseman.

Trumbo continued to pound the ball in 2010 with the Salt Lake Bees, batting .301/.368/.577 with 103 runs, 29 doubles, 36 homers and 122 RBI. He led the Pacific Coast League in home runs (3 ahead of Greg Halman), led in RBI (16 ahead of Brad Snyder) and led in runs (six more than the runner-ups). He tied Mike Moustakas for the most homers in the affiliated minors but lost the Round-Tripper Award to Moustakas based on RBI. He was named the PCL All-Star first baseman but lost MVP honors to J.P. Arencibia.

That earned Trumbo a September call-up to the big leagues. In his first MLB at-bat, he pinch-hit for Mike Napoli and struck out against Jamey Wright. He went 1 for 15 in 8 games in his first taste of the big leagues. In 2011, with Kendrys Morales out for the season, he became the Angels' starting first baseman. He showed good power, belting 29 homers - tops among all major league rookies - and 31 doubles. Overall, he hit .254 in 149 games, but drew only 25 walks (against 120 strikeouts), for a poor .291 on-base percentage. He slugged .477 for a 114 OPS+. He lost out to the Tampa Bay Rays' Jeremy Hellickson in the vote for the 2011 American League Rookie of the Year Award, finishing second in the balloting.

He hit .268/.317/.491 for a 124 OPS+ in Angels, alternating between the corner outfield slots, DH and the corner infield positions. He homered 32 times, drove in 95 and whiffed 153 times. He made the AL team for the 2012 All-Star Game. Replacing Jose Bautista in right field, he struck out against R.A. Dickey and Aroldis Chapman his two trips up, facing two very different types of pitchers. He finished among the 2012 AL leaders in homers (tied for 10th with Adam Jones and Josh Reddick) and was 9th in strikeouts. He produced at a .234/.294/.453 clip (109 OPS+) with 85 runs, 30 doubles, 34 home runs, 100 RBI and 184 strikeouts for the 2013 Angels, still mostly an all-or-nothing hitter. He tied Adam Dunn for 4th in the 2013 AL in circuit clouts, was 8th in RBI (between David Ortiz and Mike Trout), was 5th in Ks (between Mike Napoli and Evan Longoria), was third in outs (behind Manny Machado and Elvis Andrus) and tied Edwin Encarnacion for 10th in extra-base hits (66).

On December 10, 2013, Trumbo was traded to the Arizona Diamondbacks in return for Ps Tyler Skaggs and Hector Santiago, the latter coming form the Chicago White Sox in return for OF Adam Eaton. In the team's opening series in Sydney, Australia on March 22-23, he drove in 4 runs, including the D-Backs' first homer of the year, a two-run shot off Kenley Jansen in the 9th inning of the second game. He had some trouble playing in left field, though, and his team lost both games. From April 3-6th, he hit homers in four consecutive games to take the early lead in the National League home run race. He was hitting .264 with a league-leading 7 homers and 19 RBIs after 21 games when he was placed on the disabled list on April 23rd with a stress fracture in his left foot. The injury in effect ruined his season, as he ended up playing only 88 games, with a .235 average, 14 homers and 35 RBIs in spite of his fast start. He was doing better at the beginning of 2015, as he was hitting .259 with 9 homers and 23 RBIs after 46 games, but he was facing another problem, a logjam of outfielders. That became particularly apparent when the D-Backs brought up Yasmany Tomas, a prize off-season signee and he began to display some serious potential with the bat. With both players having essentially the same profile, GM Dave Stewart decided to accept an offer from the Seattle Mariners for Trumbo. Concluded on June 3rd, that trade sent him and P Vidal Nuno to Seattle in return for C Welington Castillo, P Dominic Leone and two prospects, IF Jack Reinheimer and OF Gabby Guerrero. He played 96 games for Seattle, hitting .263 with 13 homers and 41 RBIs, for a combined batting line of .262/.310/..449 in 142 games and an OPS+ of 108. He hit 23 doubles and 22 homers, scoring 62 runs and driving in 64.

On December 2, 2015, the Mariners, wanting to shed some salary, traded Mark to the Baltimore Orioles along with P C.J. Riefenhauser, in return for C Steve Clevenger. On April 15, 2016 he became the first player in Orioles history to hit two homers in one inning when he did it against the Texas Rangers. That game came in the middle of a fabulous week from April 11-17 during which he went 8 for 25 with 5 homers and 11 RBIs. It was a rebirth season from Trumbo, as he was among the major league home run leaders in the first half and was named to the All-Star Game for the second time. On July 23rd, he hit his 30th home run of the year in a 5-2 win over the Cleveland Indians, becoming the first major league player to the mark that season. He finished the season with 47 homers, tops in the majors to go along with 108 RBIs and added another homer off Marcus Stroman of the Toronto Blue Jays in the Wild Card Game, but the Orioles lost the game in extra innings and were eliminated from the postseason. He was named the AL Comeback Player of the Year in recognition of his excellent season.

Trumbo became a free agent after the season, but the Orioles were always the front-runners to re-sign him, which they did on January 19, 2017. It was a three-year contract worth $37.5 million, dependent on Trumbo passing a physical exam. He picked up where he left off, as he hit a walk-off homer off Jason Grilli of the Blue Jays in the 11th inning on opening day, April 3rd, giving Baltimore a 3-2 win. He slowed down notably after that however, as he fell to .234 with 23 homers and 65 RBIs in 146 games, mainly as a designated hitter. His disappointing performance, along with that of 1B Chris Davis, were major factors in the Orioles falling to the bottom of the standings in the AL East. In 2018, he was the victim of a strained quad muscle in spring training and had to start the season on the disabled list, only making his debut on May 1st. He played 90 games, hitting .261 with 17 homers and 44 RBIs in what was a historically bad season for the team. Then in 2019, he had more injuries, limiting him to 12 games of hitting .172 with no homers. He did not play a single game in the field that season and became a free agent again on October 31st.