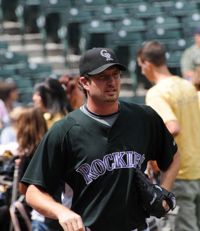 Jason Grilli made his first appearance with the Detroit Tigers on September 19, 2005, exactly 30 years to the day after his father, Steve Grilli, made his major league debut with the Tigers. The Grillis were the first American father-son duo to save games in the majors since saves became an official stat. They followed two Latino duos, Julio Navarro and Jaime Navarro and Pedro Borbon Sr. and Pedro Borbon Jr.

Grilli became the closer of the Pittsburgh Pirates in 2013, following the trade of Joel Hanrahan to the Boston Red Sox. He had an outstanding first month in the role, as he picked up 10 saves in April with an 0.82 ERA and 17 strikeouts in 11 innings. His performance was one of the keys to the Pirates finishing the month in first place in the NL Central and he was named by Major League Baseball as the winner of its Delivery Man of the Month award for April, given to the best relief pitcher in the major leagues. He repeated as the award winner in May, when he converted on all 12 of his save opportunities and had a 1.32 ERA with 17 strikeouts in 13 2/3 innings. He was named to the All-Star team for the first time, but on July 22nd he had to leave a game against the Washington Nationals with tightness in his forearm; before leaving, he had given up a pair of hits including a two-run homer to Jayson Werth. Vin Mazzaro took over for him and recorded the last out in a 6-5 win. Grilli was immediately placed on the disabled list and was expected to be out from four to eight weeks; at the time, he was leading the league in saves. He returned to the mound in early September, but Mark Melancon had taken over as closer in the interim; his next save only came on September 21st, in a 4-2 win over the Cincinnati Reds. He finished the season with 33 saves, to go along with an 0-2 record and a 1.97 ERA in 54 games. He finished Pittsburgh's 6-2 win over the Reds in the Wild Card Game on October 1st with a scoreless 9th inning, then did not give up a run in three outings in the NLDS against the St. Louis Cardinals, saving Game 3 in the process.

Grilli was tagged for 9th-inning home runs on consecutive days by Ryan Braun of the Milwaukee Brewers on April 19-20, 2014. In the first game, he was trying to nail down a 7-6 lead when Braun homered with a man on to give the Brewers the win, then the next day, Braun's solo homer wiped out a 2-1 lead, to send the game into extra innings. Until those two mishaps, he had been practically unhittable for Brewers batters over the years. Shortly thereafter, on April 26th, he was placed on the disabled list with a strained muscle in his left side; the Pirates actually wanted to disable him a day earlier, but a clerical mistake prevented them from doing so, as the pitcher they wanted to call up in his stead, Jared Hughes, was not yet eligible for promotion. He made 22 appearances for the Pirates, going 0-2, 4.87, with 11 saves, but lost the closer job to Melancon. On June 27th, he was traded to the Los Angeles Angels of Anaheim for another former closer, Ernesto Frieri. Jason then pitched 40 times for L.A., with a record of 1-3, 3.48 and 1 save. He also pitched a couple of scoreless innings in the postseason as the Angels lost the ALDS in three games against the Kansas City Royals. A free agent after the season, the 38-year-old reliever signed a two-year deal with the Atlanta Braves on December 23rd, with an option for a third, to serve as the set-up man for Craig Kimbrel.

The plans for Grilli changed just before the start of the 2015 season, as Kimbrel was dealt to the San Diego Padres, leaving the closer job for the veteran. He did well over the first half, with a record of 3-4, 2.94 and 26 saves in 36 appearances. However, just before the All-Star break on July 11th, he ruptured his Achilles tendon in running over to cover first base in the 9th inning of a game against the Colorado Rockies, allowing Drew Stubbs to reach with an infield single as the leadoff hitter in a tied game. Grilli had to leave the game, his season over, while Stubbs eventually went on to score the winning run, handing him a loss as well. He was back with the Braves in 2016, but the team was having a terrible season, and there was not much reason to hold on to the veteran closer. He was 1-2, 5.29 with 2 saves in 21 games when on May 31st, he was traded to the Toronto Blue Jays in return for Class A pitcher Sean Ratcliffe. He pitched very well the rest of the way, as in 46 games he was 6-4, 3.64 with 2 saves and 58 strikeouts in 48 innings. He then made 5 appearances in the postseason, not allowing a run and only one hit in 3 2/3 innings.

The Blue Jays were hoping that Grilli would continue to provide some experience and stability in the bullpen in 2017, but it turned out to be a very difficult time for him as the end of the line was getting nearer at age 40. He went 1-3, 7.27 in 10 games in April and barely improved in May, finishing that month with an ERA of 6.35. His first appearance in June, facing the New York Yankees on June 3rd, was truly disastrous though: trying to keep the Jays, who were trailing 3-0, in the game, he gave up a homer to the first hitter he faced in the 8th inning, Brett Gardner. After a couple of outs, he then gave up three consecutive solo homers, to Matt Holliday, Starlin Castro and Didi Gregorius, before being mercifully replaced by J.P. Howell. The Blue Jays designated Grilli for assignment on June 27th; he had a record of 2-4, 6.97 in 26 games. He was traded to the Texas Rangers on July 2nd in return for minor leaguer Eduard Pinto and was immediately added to the 25-man roster of the pitching-starved team. Manager Jeff Banister explained that he badly wanted a veteran presence in his bullpen, composed largely of first- and second-year players. He went 0-1, 5.59 in 20 games for the Rangers in what were the final appearances of a 15-year major league career.

In 16 career postseason appearances covering 12 innings, with four different teams, he did not allow a single earned run and only 5 hits.