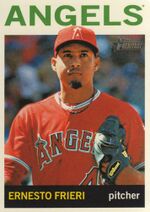 Ernesto Frieri is a pitcher who made his debut with the San Diego Padres late in the 2009 season.

Ernesto Frieri was absolutely brilliant after being acquired by the Los Angeles Angels of Anaheim in a trade on May 3, 2012. In his first 10 innings for the Angels, he did not allow a single hit and recorded 22 strikeouts. After 25 1/3 innings, he had still not allowed a run, while giving up only 7 hits against 43 strikeouts. His string was finally snapped on July 15th, when he gave up a two-run homer to the New York Yankees' Mark Teixeira, having run the string to 26 1/3 innings in the meantime.