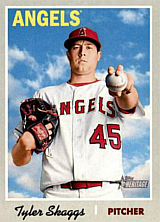 Tyler Skaggs was drafted by the Los Angeles Angels of Anaheim in the supplemental 1st round of the 2009 amateur draft. He was signed by scout Bobby DeJardin for $1 million and made his pro debut that summer.

On July 25, 2010, Patrick Corbin, Rafael Rodriguez and Joe Saunders were traded to the Arizona Diamondbacks with a player to be named later for Dan Haren. Skaggs was sent to the D-Backs in August to complete the trade. He was a winner in his major league debut for the Diamondbacks in the first game of a doubleheader against the Miami Marlins on August 22, 2012. He pitched 6 2/3 innings to win, 3-2. His only sign of nervousness was walking 5 batters, more free passes than he had issued in any of his 69 minor league starts up to that point. He had begin the year in Double A with the Mobile Bay Bears, where he went 5-4, 2.84 in 13 starts, and then moved to the Triple A Reno Aces, where he was 4-2, 2.91 in 9 starts to earn the call. He ended up making 6 starts with the D-Backs, going 1-3, 5.83 while pitching 29 1/3 innings.

Skaggs was back with the Reno Aces to start the 2013 season, but he struggled in the early going in the high-offense environment of the Pacific Coast League, going 4-5, 5.23 in his first 9 starts. Nevertheless, the Diamondbacks called him up for a one-off start in the first game of a doubleheader against the Texas Rangers on May 27th, and he was outstanding. He struck out 9 in 6 innings, giving up only 3 hits and no runs to earn the win as Arizona prevailed, 5-3. The D-Backs decided to keep him around, but he was hit hard in his next two starts, giving up 10 runs in 10 2/3 innings and returned to the PCL. When he next came back on July 5th, he reeled off a beauty of a game, pitching 8 shutout innings against the Colorado Rockies to earn a 5-0 win. Overall, he made 7 starts for Arizona, finishing at 2-3, 5.12 and striking out 36 in 38 2/3 innings. In the minors, he was 6-10, 4.59 for Reno and also made one rehabilitation outing for the Visalia Oaks of the California League. On December 10th, the D-Backs traded him back to the Angels, along with Hector Santiago, acquired from the Chicago White Sox in return for OF Adam Eaton in the same deal, in return for slugging 1B/OF Mark Trumbo.

Skaggs was a winner in his debut with the Angels, defeating the Houston Astros, 5-1, on April 5, 2014. His record was at 5-5, 4.49 after 17 starts when he had what looked like his best start of the season against the Baltimore Orioles on July 31st: he had not given up a hit through the first four innings, and started the 5th by striking out Delmon Young, but he felt something wrong in his elbow on the strikeout pitch. He faced a couple more batters, but had no sensation in his fingers and left the game with a likely forearm strain. Indeed, a week later he was diagnosed with ligament damage and had to undergo Tommy John surgery, ending his season and forcing him to miss all of 2015 as well.

He was headed to another good season in 2019 as at the end of June, he was at 7-7, 4.29 after 15 starts and had logged 79 2/3 innings. But he died suddenly on July 1st as the Angels were about to play a game against the Texas Rangers in Arlington, TX. News of his death was announced only a couple of hours before that evening's game, which was canceled out of respect for his family and teammates. The cause of death was not immediately made public but police confirmed that no foul play was involved. He was paid a special tribute before the 2019 All-Star Game, which was played a week later, as all players stood for a moment of silence before the playing of the National Anthem and teammates Mike Trout and Tommy La Stella both wore his uniform number, 45, in his honor. The Angels paid him tribute in the best possible way in their first home game on July 12th. Every member of the team wore his number, his mother was invited to throw the ceremonial first pitch, and his teammates went on to demolish the Seattle Mariners, 13-0, scoring 7 runs in the 1st inning with pitchers Taylor Cole and Felix Pena combining on a no-hitter.

The autopsy results came out on August 30th and contained some troubling information, namely that Skaggs had opioids and alcohol in his system at the time of his death, and that the death was caused by an overdose of ethanol, fentanyl and oxycodone. This was unfortunately all too common at a time when many were denouncing a growing epidemic of deaths caused by opioids across North America, although it was the first time a prominent baseball player's name was linked to the epidemic. In another shocking development, Skaggs's family stated that it believed a team employee had been involved in procuring the fatal drugs to the player. General Manager Billy Eppler said that the club was cooperating with the police investigation into this particular aspect of the case. At the following winter meetings, MLB and the MLBPA announced that there would now be testing for opioids, with the aim of catching the problem before it led to another tragic outcome and provide treatment to the affected person. In August 2020, court documents identified Eric Kay, who had been employed in the Angels' media relations department for 24 years, as the person who supplied fentanyl, a synthetic opioid, to Skaggs on the night of his death. He was apparently supplying a number of players, but team management claimed it was completely unaware of his extra-curricular activities. Kay was arraigned and charged in a federal courthouse in Fort Worth, TX on August 7th and faced up to 20 years in prison. He was indicted by a grand jury on October 16th on two counts of drug trafficking, although he was cooperating fully with authorities. On June 29, 2021, Skaggs' parents and widow filed a lawsuit against his former teams and two former employees, Kay and Tim Mead, who had been Kay's supervisor in the communications department, for negligence, gross negligence and wrongful death. The Angels replied that the suit was without merit as they had no awareness that Skaggs was using illegal drugs and would have acted had they known.