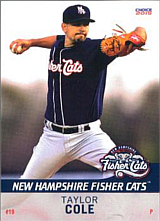 Taylor Cole can count a celebrated combined no-hitter among his 57 MLB appearances.

Cole was originally drafted by the Los Angeles Dodgers in the 26th round of the 2007 amateur draft, one pick ahead of infielder Andy Parrino, but opted not to sign. He was next taken by the Arizona Diamondbacks in the 31st round in 2008, but once again did not sign. He inked a contract after being drafted by the Toronto Blue Jays in the 29th round in 2011. His first season of note was 2012, when he went 6-0 with a 0.81 ERA in 12 games (11 starts) for the Vancouver Canadians, allowing just 36 hits in 66 1/3 innings. He was named Topps' Northwest League Player of the Year and made Topps' Short Season/Rookie All-Star team. He again earned an All-Star selection in 2014, after going 8-11 with a 3.43 ERA in 26 games for the New Hampshire Fisher Cats and Dunedin Blue Jays in 2014. He was a Florida State League Mid- and Post-Season All-Star that year.

Taylor debuted with a lone appearance for the Blue Jays on August 9, 2017, allowing 4 runs and 6 hits in 1 inning of work. He was let go at the end of the season, joining the Los Angeles Angels organization and making 18 appearances in 2018 with a 2.75 ERA in 36 games. On July 12, 2019, he made his most memorable appearance as a big leaguer. He was the opener in a bullpen game against the Seattle Mariners. It was an emotional occasion, as it was the Angels' first home game after the tragic death of pitcher Tyler Skaggs on July 1st. He pitched two hitless innings, and Felix Pena then took over, not giving up a hit the rest of the way as the two combined on a 13-0 no-hitter. Taylor's ERA ballooned to 5.92 in 38 total appearances and he was designated for assignment around the time COVID-19 shut baseball down in the spring of 2020.