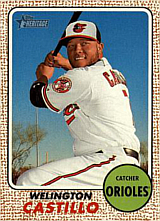 After 24 tough games (.163/.234/.349 in 43 at bats), Welington was traded to the Seattle Mariners on May 19, 2015 in return for pitcher Yoervis Medina. After barely two weeks with Seattle, during which he played 6 games, he was traded again, this time to the Arizona Diamondbacks on June 3rd. In contrast with the Cubs and Mariners, the D-Backs had a clear need for a catcher, having just lost starter Tuffy Gosewisch to a season-ending knee injury; Castillo and fellow veteran Jarrod Saltalamacchia, called up from the minors, were to share the catching burden. Joining Welington in the trade were pitcher Dominic Leone and two prospects, infielder Jack Reinheimer and outfielder Gabby Guerrero, while the Mariners received outfielder Mark Trumbo and pitcher Vidal Nuno. Castillo went on a power surge for the Diamondbacks starting on July 28th, as he hit 7 homers in 10 games. When he hit home run number 15 in a 13-3 win over the Philadelphia Phillies on August 10th, he set a new career high with seven weeks left in the season. He finished the year with 17 homers in 80 games for the D-Backs for a total of 19. He hit .255/.317/.496 and drove in 50 runs for Arizona. He was the team's starter again in 2016, playing 113 games and hitting .264/.322/.423 with 24 doubles and 14 homers with 68 RBI. His lack of walks (33 against 121 strikeouts) meant his OPS+ was only 92, while the D-Backs had a wretched season.

On May 19, 2017, playing for the Baltimore Orioles after signing as a free agent to replace Matt Wieters, he had the best game of his career when he homered twice against the Toronto Blue Jays. The second homer was a walk-off shot off Jason Grilli in the 10th inning that gave Baltimore a 5-3 win; his first long ball had been a game-tying two-run shot off Aaron Sanchez in the 6th. He played 96 games, hitting .282/.323/.490 with a career-high 20 homers and 53 RBI. He became a free agent again and joined the Chicago White Sox in 2018. He was hitting .267 in 33 games when, on May 23rd, a story emerged that he would be suspended 80 games for failing a drug test, confirmed the next day. The drug in question was EPO, the substance most associated with disgraced cyclist Lance Armstrong. He returned in September and, for the year, hit .259/.304/.406 in 49 games with 6 homers and 15 RBI. He was the main backup for newly-acquired James McCann for the White Sox in 2019, when he played 72 games. He hit just .209/.267/.417, his lowest batting average since a cup of coffee in 2011, but hit 12 homers and collected 41 RBI. On October 31st, he was traded to the Texas Rangers, along with international slot money, in return for minor leaguer Jonah McReynolds. The move was designed to clear space on Chicago's 40-man roster, as a number of players were coming off the 60-day injured list, and it was likely that Texas would simply buy out his remaining option year for $500,000 rather than commit to the $8 million due. Indeed, on November 2nd, the Rangers announced that they had declined the option, making him a free agent. He signed with the Washington Nationals for 2020.