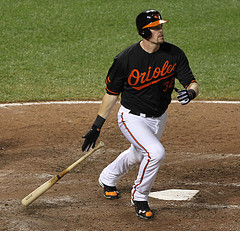 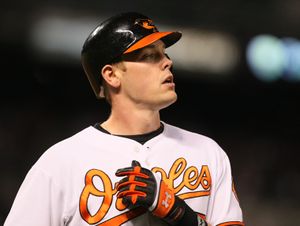 Matt Wieters, the Baseball America Minor League Player of the Year in 2008, attracted attention before he had played in the majors because of his status as a top prospect. He made his major league debut in May 2009 for the Baltimore Orioles.

He was a star for Georgia Tech and was picked fifth overall in the 2007 amateur draft by the Orioles.

Wieters is the son of Richard Wieters, who reached AA during his professional career from 1977-1981. He is also the nephew of Mike Shields, a former minor league pitcher for four years.

Matt was the Atlantic Coast Conference Rookie of the Year in 2005, hitting .366/.470/.581 while going 3-3 with a 2.85 ERA on the mound. He was in the top 10 in the ACC in average and had the lowest ERA on the #11-ranked team in the country. He finished second on the club with 68 RBI, trailing top prospect Tyler Greene, a junior, by 4. Baseball America named him a freshman All-American first-teamer as a DH. For the USA College national team, he hit .237/?/.545 while playing first base so that J.P. Arencibia could catch.

In 2006, Wieters was even better. He batted .355/.480/.606 and was 1-3 with 7 saves and a 3.41 ERA as the closer for Georgia Tech. He was a first-team Baseball America All-American as the top catcher in the country. His 56 walks were second in NCAA Division I, just one behind Pedro Alvarez. Georgia Tech was ranked 7th in the country. Wieters led the team in homers, saves and RBI while finishing second in runs (72) and average.

He hit .307/.417/.535 for the 2006 Orleans Cardinals. He was second in the Cape Cod League in average, 3 points behind Matt Mangini, was third in slugging, second in OBP behind Matt Cusick and tied for second in homers (8, even with Warren McFadden behind Justin Smoak). Baseball America rated him the #3 prospect in the league behind Smoak and Andrew Brackman.

Wieters hit .358/~.480/.592 as a junior while slipping to 1-4, 7.53 with 3 saves on the mound. He joined Buster Posey on the All-ACC first team at catcher. Matt won the Baseball America nod as the All-American catcher, while Posey was so honored by Collegiate Baseball and Ed Easley by the American Baseball Coaches Association. Easley beat out the other two for the Johnny Bench Award.

Wieters was advised by agent Scott Boras. This possibly detracted the Pittsburgh Pirates, who chose fourth, from selecting him. Scouted by Dave Jennings, Wieters went 5th overall in the 2007 amateur draft, to the Baltimore Orioles. He signed for a $6 million bonus right before the August 15 11:59 PM deadline.

Wieters debuted in winter ball for the Honolulu Sharks, hitting .283 and slugging .415. His OBP was around .356. Baseball America named him the best prospect in Hawaii Winter Baseball, beating out Austin Jackson.

Facing the Pirates organization that passed on him in the 2007 draft in his pro debut, Wieters homered twice, walked, scored 3 and drove in 3 in a 7-3 for the Frederick Keys over the Lynchburg Hillcats. He had a fabulous season in 2008, split between Frederick and the AA Bowie BaySox of the Eastern League, putting up a combined line of .355/.454/.600, with 22 doubles and 27 homers and 82 walks in 130 games. He was named the Baseball America Minor League Player of the Year at the end of the season. The publication rated him the top prospect in both the Carolina League and Eastern League.

In 2009, Wieters started off with the Norfolk Tides. After 39 games, he was hitting .305/.387/.504 with 30 RBI. He was then promoted to Baltimore. He made his major league debut 8 days after his 23rd birthday, flying into a double play against Dontrelle Willis in his first at-bat. Hitting 7th, he finished the day 0 for 4. The next day, he doubled and tripled in 4 at-bats. He hit his first major league home run on June 17 against Tim Redding of the New York Mets.

Matt's 2014 season with the Orioles was cut short by an elbow injury which required to undergo Tommy John surgery on June 23rd. He had last played on May 10th and was off to a good start, hitting .308 with 5 homers and 18 RBIs in 26 games before going on the disabled list with what was originally termed "elbow discomfort". Rest and rehabilitation did not help and he needed to make a decision on what course to follow before July 1st or risk missing the start of the next season. Ironically, he was voted the American League starting catcher in the 2014 All-Star Game, but obviously could not take part in the game. In spite of his absence, the Orioles went on to have a great season, winning the AL East[ by a comfortable margin and advancing all the way to the American League Championship Series, but the production of Nick Hundley and Caleb Joseph, who got most of the playing time in his absence, was nowhere near Matt's standards. The O's were therefore happy to have him back in 2015, but were being very careful with him. For example, he did not start his first game at catcher in spring training until March 17th, two weeks into the Grapefruit League schedule, then was immediately sidelined by elbow tendinitis. He finally played his first game of the year on June 5th and had 2 hits and 2 RBIs in a 5-2 win over the Cleveland Indians. He played 75 games, hitting .267 with 8 homers and 25 RBIs. He was a potential free agent after the season but accepted a qualifying offer from the Orioles, re-signing for one year.

In 2016, Wieters was fully healthy again, playing 124 games, including 117 at catcher. He hit .243 with 17 homers and 66 RBIs and was selected to play in the All-Star Game for the fourth time. He also started the American League Wild Card Game behind the plate but went 0 for 4 as the Orioles were defeated by the Toronto Blue Jays in extra innings. After the season, Wieters did try free agency and on February 21, 2017 signed a two-year contract with the Washington Nationals worth $21 million. He was set to take over for Wilson Ramos, who had left the Nats as a free agent earlier in the off-season.

In his first season with the Nationals in 2017, he played 123 games and hit .225 with 10 homers and 52 RBIs, production below what the Nats were expecting when they signed him. He continued to struggle in the postseason, going just 2 for 14, with both hits being singles, as the Nationals lost to the Chicago Cubs in five games in the Division Series. In 2018, he started the first two games of the season, then went on the DL on April 2nd with a mild oblique strain. He was reactivated on April 12th and played regularly for the next month, then went back to the DL on May 11th, this time with a hamstring problem. That cost him two months of play, as he only made his return on July 9th. With all the interruptions, he was limited to 76 games, hitting .238 with 8 homers and 30 RBIs.

In 2019, he moved to the St. Louis Cardinals as a free agent and played 67 games as Yadier Molina's understudy. He hit .214 with 11 homers and 27 RBIs. He returned to the postseason, but only saw very limited action, going 0 for 3 in the Cardinals' two series. He was back in 2020, although he started very slowly with just 1 hit - a single - in his first 17 at-bats. On September 8th, he had one of the longest at-bats ever recorded as Caleb Thielbar of the Minnesota Twins needed 19 pitches to get him to fly out to center field.