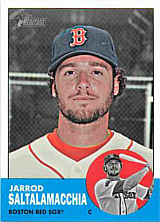 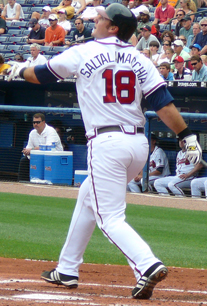 In 2004, Jarrod played for the Rome Braves and hit .272/.348/.437. Baseball America ranked him as the #7 prospect in the South Atlantic League and also as the 7th-best catching prospect in baseball, between Kelly Shoppach and Russell Martin.

Saltalamacchia had his best minor league season yet in 2005, hitting .314/.394/.519 for the Myrtle Beach Pelicans. He hit 19 home runs and 35 doubles, the most in the Braves minor league chain. Baseball America named him the top catcher in the minor leagues and the top prospect in the Carolina League, ahead of Anibal Sanchez and Nick Markakis. He made the Carolina League All-Star team, having finished third in average and led in intentional walks (11). He followed up by hitting .565 in 23 AB for the Peoria Javelinas of the Arizona Fall League. Jarrod struggled in 2006, only hitting .230/.353/.380 for the Mississippi Braves. Baseball America still rated him the #10 prospect in the Southern League between Sanchez and Miguel Montero. In the qualifying tournament for the 2008 Olympics, he backed up Kurt Suzuki at catcher while also serving as the team's primary DH. He batted .250/.368/.406.

Saltalamacchia started 2007 with a .309/.404/.617 line with 18 runs in 22 games for Mississippi. When Atlanta's top two catchers, Brian McCann and Brayan Pena, were both injured by swung bats on May 1, Saltalamacchia was called up to be Atlanta's backstop. In his first game with Atlanta, Jarrod went 0 for 2 with a walk and a hit by pitch on his 22nd birthday. In his first MLB at-bat, he flew out to Aaron Rowand against Freddy Garcia. When Pena returned, Saltalamacchia remained on the roster, with the team releasing Craig Wilson. To get him some playing time, Atlanta also used him at first in lieu of Scott Thorman. Saltalamacchia hit .284/.333/.411 in 47 games for the Braves. He was involved in the big trade deadline deal, getting sent to the Texas Rangers with Elvis Andrus, Neftali Feliz, Matt Harrison and Beau Jones in exchange for Mark Teixeira and Ron Mahay. Saltalamacchia played a key role within a month, in the highest-scoring game in American League history, on August 22nd, as Texas scored 30 times against the Baltimore Orioles. Saltalamacchia scored five of those runs, drove in seven and hit two homers to lead the offense. He spent most of 2008 and 2009 with the Rangers, getting into 61 and 84 games, and hitting .253 and .233. The Rangers were disappointed with his offensive output, and sent him back to the minors in 2010. On July 31st , he was traded to the Boston Red Sox for three minor leaguers. He ended up playing only 12 games between the Rangers and Red Sox that year, hitting only .167.

Boston had big plans for Saltalamacchia, with long-time starting catcher Jason Varitek nearing the end of the line. Salty was the starter with Varitek the backup in 2011, and he played a career-high 103 games, hitting only .235 but with 23 doubles and 16 homers. Varitek retired after the season, and Jarrod played 121 games in 2012, with similar results: a low batting average (.222) but good power for a catcher (17 doubles and 25 homers). But the Sox had a terrible season, finishing in last place, and were not ready to commit to Saltalamacchia over the long haul, especially as his defense and handling of pitchers was considered below average. Given a very good defender as a back-up in veteran David Ross, he had his best season in 2013, hitting .273 with 40 doubles and 14 homers, scoring 68 runs and driving in 65 as the Sox bounced back to win the AL East title. Playing in the postseason for the first time, he went 3 for 10 in the ALDS, but slumped to .188 in the ALCS. Things continued to go badly in the World Series against the St. Louis Cardinals. After Ross started Game 1, he went hitless in the next two games, both of which the Red Sox lost, and both times largely because of defensive lapses: in Game 2, he was charged with an error when he dropped a throw from LF Jonny Gomes that allowed the winning run to score in the 7th; in Game 3, he made an ill-advised throw in the 9th, trying to retire Jon Jay at third base, starting a string of events that led to Jay scoring the winning run on an obstruction call a few moments later. Manager John Farrell replaced him with Ross in Game 4, and the back-up caught the next three games which the Sox all won to clinch the title. In fact, that was the end for Salty as a member of the Red Sox: on December 3rd, he signed a three-year free agent contract with the Miami Marlins, worth $21 million.

Jarrod was the starting catcher for the Marlins in 2014, playing 114 games and hitting .220 with 11 homers and 44 RBI. In 2015, he played only 9 games for the Fish before he was released on May 5th. He was picked up by the Arizona Diamondbacks, where he played 70 games but with only 171 at-bats. He was productive when he did play, hitting .254 with 8 homers and 23 RBI (he had hit one homer with one RBI for the Marlins). In 2016, he signed with the Detroit Tigers, with the clear indication that he would only serve as a back-up to young James McCann. He messed with those plans a bit with a great April, when he hit 6 homers and drove in 15 runs in 17 games, but his playing time diminished after that streak and he finished with 92 games and a poor .171 batting average, although he did hit 12 homers and drive in 38 runs. Now no longer looking for a starting job, in January of 2017 he signed with the Toronto Blue Jays to serve as a back-up for Russell Martin. However, that did not last long, as he started the year 1 for 25 in his first 10 games and was handed his release on May 4th - ironically less than a week before Martin had to go on the disabled list because of a shoulder injury. He decided to retire and accepted a job as an analyst with NESN.

Well after the opening of spring training in 2018, he decided to put his retirement on hold and signed a minor league deal with Detroit. He saw an opportunity because the Tigers had only two catchers with major league experience in James McCann and John Hicks, and as a result were looking to add some organizational depth at the position. He did make it back to the big leagues for 5 games in September, during which he went 0 for 7. He then announced his retirement - this time for good, - the following February.

His long surname, referenced earlier, is Italian and means "jump over" (salta) "the thicket" (la macchia), though la macchia can be translated to "the spot" as well. In 2022, Simeon Woods-Richardson, whose last name includes 15 letters (not counting the hyphen) made his major league debut, beating him by one, although his record still stands for the longest single-word surname.

His brother, Justin Saltalamacchia, played in the Atlanta Braves system in 2003.