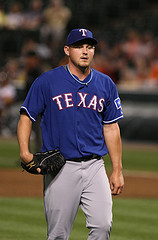 Matt Harrison was drafted by the Atlanta Braves in the 3rd round of the 2003 amateur draft. He was signed by scout Billy Best and made his pro debut that summer. He was then traded to the Texas Rangers on July 31, 2007, as part of the deal for Mark Teixeira and made his major league debut with the Rangers a year later, on July 8, 2008. He went 9-3 in spite of a 5.49 ERA as a rookie, then 4-5, 6.11 in 2009. Harrison had 13 wins in his first 22 games in the majors over his first two seasons. That was the best start by a left-hander in The Show since Vean Gregg back in 1911.

After a 3-2 year as a long reliever and spot starter in 2010, Harrison really emerged into his own in 2011. That year, he was 14-9, 3.39 as a full-time member of the Rangers' starting rotation, pitching 185 2/3 innings. After not pitching at all in the postseason in 2010, when the Rangers reached the World Series for the first time, he was a key pitcher for them in 2011. He won a game over the Tampa Bay Rays in the ALDS, then gave up only 2 runs in 5 innings in his only start of the ALCS facing the Detroit Tigers. However, he lost both of his World Series starts, losing 16-7 to the St. Louis Cardinals in Game 3 in a game when Albert Pujols had a performance for the ages, and starting and losing the decinding Game 7 on October 28th, when he gave up 3 runs in 4 innings and was bested by Chris Carpenter.

Harrison was the American League Pitcher of the Month in June 2012, when he went 5-0, 1.29. One of the wins was a shutout, and he struck out 24 batters in 42 innings. He was also named to the All-Star team for the first time that year. He went 18-11, 3.29, leading the Rangers in wins and pitched 213 1/3 innings to consolidate his place as the team's ace. He did not get a chance to pitch in the postseason, as the Rangers lost the Wild Card Game to the Baltimore Orioles with Yu Darvish on the mound. 2013 started off poorly for him however. He made a couple of ineffective starts early in the season, racking up two losses with an ERA of 8.44, then was put on the disabled list with a sore back. The source of the pain turned out to be a herniated disc requiring surgery, which put him on the shelf until after the All-Star break. he underwent as second operation a couple of weeks later, pushing his potential return even further back. In early August, the Rangers decided to shut him down for the remainder of the season as his recovery was proceeding slower than expected.

Harrison came back to make 4 starts at the beginning of the 2014 season, going 1-1, 4.15, but the back problems resurfaced and he had to go back to the disabled list on May 14th. This time, the prognosis was not good at all, as he was diagnosed with a condition causing severe nerve pain in his back, whose treatment was spinal fusion surgery. The odds of returning to pitch after such a procedure were deemed minimal, while not having the surgery would mean never being able to pitch without pain. He decided to undergo the operation, which was performed on June 3rd. The question was whether he would be in condition to attempt a comeback starting in 2015. The surgery was successful, and Harrison was back on schedule, being added to the Rangers' roster on July 4th in order to make his first start of the year a few days later. In his first game, on July 8th, he was roughed up a bit, as the Arizona Diamondbacks touched him for 5 runs in the 2nd inning, handing Matt a 7-4 loss. His first win in 14 months came on July 21st, when he defeated the Colorado Rockies, 9-0, with the help of Shin-Soo Choo, who hit for the cycle, and Delino DeShields, who collected four hits. Harrison worked 6 innings and was in several jams that day, but escaped without giving up a run. He was 1-2, 6.75 after three starts, and the Rangers were in a quandary: he was now healthy, but needed more work at the major league level to regain his effectiveness, but the Rangers were making a push for the postseason and would prefer not to have a pitcher who was not at his best in their rotation. But he was owed a lot of money, which made it difficult to trade him. They found a solution on July 29th when the Philadelphia Phillies agreed to take him on board in the trade that sent their ace, Cole Hamels and reliever Jake Diekman to Texas. It was not an entirely altruistic move on the part of the Phillies though, as this meant that they were also receiving a major haul of prospects in the deal: Ps Alec Asher, Jerad Eickhoff and Jake Thompson, C Jorge Alfaro and OF Nick Williams. However further back issues kept Harrison from ever pitching for the Phillies and the team released him from his contract on November 15, 2016 despite him being owed $13.2 million in 2017.