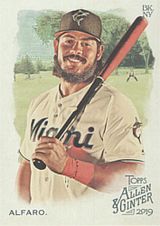 Alfaro signed initially with Texas Rangers scouts Don Welke, Rodolfo Rosario and Hamilton Sarabia. The $1.3 million signing bonus he received was the highest in the history of baseball in Colombia. In 2010, he hit .221/.278/.291 for the DSL Rangers. The next year, he batted .300/.345/.481 for the Spokane Indians, with only 4 walks and 54 strikeouts in 160 at-bats. Baseball America named him the 8th best prospect in the Northwest League, between Rougned Odor and Jesus Galindo. He missed much of 2012 with a hamstring strain; when healthy, his batting line was .261/.320/.430 for the Hickory Crawdads. In 2013, the Colombian backstop was back with Hickory and putting up slightly better numbers by early July. He was picked for the World team for the 2013 Futures Game but could not make it due to injury; Ji-Man Choi took his place on the roster. He ended that season with a batting of .265/.346/.463 in 113 games, with 24 doubles, 18 homers, 72 runs scored and 61 RBI; he played a handful of game with the AZL Rangers and with the Myrtle Beach Pelicans in addition to his time with Hickory.

He began 2014 with Myrtle Beach, where he hit .261 in an even 100 games before getting a promotion to the Frisco RoughRiders of the Texas League. There, he played an additional 21 games, maintaining the same batting average, giving him a combined line of .261/.323/.440 in 121 games. He belted 26 doubles and 17 homers. Alfaro had more injury trouble playing for Frisco in 2015. He was hitting .253/.314/.432 after 49 games when he injured his left ankle in mid-June, requiring season-ending surgery. Nevertheless, he was one of five Rangers prospects sent to the Philadelphia Phillies on July 29th, along with veteran starting pitcher Matt Harrison, to obtain ace starter Cole Hamels and reliever Jake Diekman. The other prospects in the trade were pitchers Alec Asher, Jerad Eickhoff and Jake Thompson and outfielder Nick Williams.

With the Reading Fightin Phils in 2016, he hit .285/.325/.458 with 15 homers but only 22 walks, fielding .993 and throwing out 44% of those who tried to steal. He tied Ryder Jones and Dwight Smith Jr. for 9th in the Eastern League in home runs. He was a September call-up, making his debut as a pinch-hitter for Hector Neris with a 6-1 lead against the Pirates. He singled off Jared Hughes then was erased when Cesar Hernandez hit into a force out. He was only 2 for 16 with a walk and 8 strikeouts for the 2016 Phillies. Alfaro was rated Philadelphia's 3rd best prospect by Baseball America entering 2017 (behind J.P. Crawford and Mickey Moniak) and the 41st best in all of baseball. He was 3 for 12 with a homer in the 2017 World Baseball Classic, taking Fernando Rodney deep in the 8th as Colombia tied the defending champion Dominican national team at 3-3; the Dominicans would come back in extra innings. He tied Jhonatan Solano for the best slugging percentage on the Colombian squad. He started 2017 unimpressively with the Lehigh Valley IronPigs (.241/.291/.358 in 84 games) but was called up in early August with Andrew Knapp injured. He batted .318/.360/.514 with 5 homers in 29 games for the Phillies to show he could handle the majors. His first big league dinger was off Dinelson Lamet.

Representing Colombia again in the 2017 Bolivarian Games, he hit only .176/.333/.235 but scored a team-high four runs as they won Gold for the first time since 1973. He tied Kevin Ayala for 5th in the event in runs. Installed as the starter for a rapidly improving Phillies in 2018, he earned high praise from manager Gabe Kapler in May, who compared him with former teammate Hall of Famer Ivan Rodriguez and added: "He is spectacularly talented, spectacularly athletic, incredibly durable. And he's starting to look like a guy who is going to be a fixture in our lineup for a long time." In 108 games, he hit .262 with 10 homers and 37 RBI. He was named the catcher on the 2018 Topps All-Star Rookie Team. It was good production, but the Phillies were looking to make a serious push for a division title and more in 2019, and decided to sacrifice the young catcher in order to acquire the best backstop available on the market, All-Star J.T. Realmuto. On February 7th, Alfaro headed to the Miami Marlins alongside pitching prospects Sixto Sanchez and Will Stewart in return for Realmuto. The Marlins also received $250,000 in international bonus slot money. His first season in Miami saw him play 130 games, with a similar slash line to his 2018 production in Philly (.262/.312/.425).