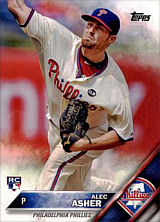 Starting pitcher Alec Asher played in the Texas Rangers minor league system from 2012 to 2015 before being included in a major trade with the Philadelphia Phillies. He pitched parts of four seasons in the big leagues.

Alec was back with Frisco to start 2015, but did not stay long as he was promoted to the AAA Round Rock Express after 8 starts, during which his record was 1-4, 3.98. In the Pacific Coast League, he was 3-6, 4.73 in 12 starts when he was one of five prospects sent by the Rangers to the Phillies in the trade that landed them ace Cole Hamels. Jake Diekman also went to Texas in the trade, while Matt Harrison headed the other way. The four other prospects were pitchers Jerad Eickhoff and Jake Thompson, catcher Jorge Alfaro and outfielder Nick Williams. Alec was assigned to the Lehigh Valley IronPigs, where he went 2-0, 2.08 in 4 starts.

Asher was called up to Philadelphia to make his debut on August 30, 2015, starting a game against the San Diego Padres. He went 5 2/3 innings, giving up 4 runs on 8 hits, walking one and striking out three to be charged with a 9-4 loss; Matt Kemp homered off him in the 1st after he had retired the first two batters of the game, and Justin Upton also connected for a solo shot in the 3rd. He made 7 starts for the Phillies and was charged with 6 losses, putting up an ERA of 9.31 in 29 innings. On June 16, 2016, he received an 80-game suspension after testing positive for a banned PED. He was 4-2, 2.30 in four starts each with the Double A Reading Fightin' Phils and Triple A Lehigh Valley IronPigs but was on the disabled list at the time of the suspension. On the eve of the 2017 season, he was dealt to the Baltimore Orioles, for whom he logged his most big league time: 24 appearances (6 starts) with a 5.25 ERA in 60 innings. He had a 2 game cameo with the Milwaukee Brewers in 2018 and was touring the Atlantic League in 2019 when he was sold to the Uni-President Lions of the Chinese Professional Baseball League. He was 1-6 with a 4.29 ERA for the Lions in the 2019 CPBL.