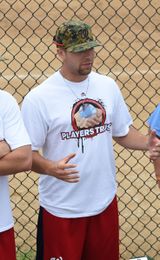 Blake Treinen is a pitcher who made his big league debut in 2014.

Treinen began his college career on the junior varsity team at NAIA Baker University in 2007. He then enrolled at the University of Arkansas as a student but didn't play baseball in 2008. He transferred to South Dakota State University, sitting out 2009 due to NCAA transfer rules. He was 7-1 with a 6.09 ERA for South Dakota State as a junior in 2010. He was 5th in the Summit League in wins, 4th in innings (75 1/3), 1st in wild pitches (16) and 3rd in strikeouts (82). The Florida Marlins picked him in the 23rd round of the 2010 amateur draft, but he did not sign. He had a 7-1, 3.00 record in 2011 and fanned 84 in 84 innings. He was 6th in the league in ERA, tied for second in wins, tied for fourth in innings, third in strikeouts and was first in wild pitches again (12). In the 2011 amateur draft, the Oakland Athletics (behind scout Kevin Mello) took him in the 7th round.

He made his major league debut with the Nationals early in the 2014 season and recorded his first career win on June 28th when he defeated the Chicago Cubs, 7-2, in the second game of a doubleheader. He went 2-3, 2.49 in 15 games for the Nationals, including 7 starts, pitching 50 2/3 innings, but he was not used in the postseason. He had a particularly tough game against the Boston Red Sox on April 14, 2015. In the 7th inning, after hitting the first batter he faced, Allen Craig, with a pitch, he committed two errors on the same play on a comebacker by Ryan Hanigan as the Sox scored three runs without the benefit of a hit. He was charged with the 7-6 loss. He made 60 appearances, all in relief, that season, with a record of 2-5, 3.86. He struck out 65 in 67 2/3 innings.

In 2016, he was the team's main set-up man, first for Jonathan Papelbon and later for Mark Melancon after a mid-season trade led to a change of closers. He went 4-1, 2.28 in 73 games, pitching 67 innings and giving up 51 hits and 31 walks while striking out 63. He also recorded his first career save. He was the winner of Game 2 of the Division Series against the Los Angeles Dodgers on October 9th, entering in the top of the 7th with the Nationals leading, 4-2. He retired all three batters he faced in order, as well as the first batter he faced in the 8th before giving way to lefty Oliver Perez, and the official scorer decided to credit him with a win that could also have gone to Marc Rzepczynski. In Game 4 two days later, however, he again came in in the 7th, this time with two outs and the score tied at 5-5. He struck out Yasiel Puig to end the inning, but after two quick outs in the 8th, he hit Andrew Toles with a pitch then gave up back-to-back singles to Andre Ethier and Chase Utley as the Dodgers scored the winning run. In the decisive Game 5 on October 13th, he replaced Rzepczynski in the top of the 7th with the scored tied 1-1 after Max Scherzer had given up a lead-off homer to Joc Pederson and Rzepczynski had walked the only man he had faced, Yasmani Grandal. Blake allowed a single to Howie Kendrick, then after striking out Charlie Culberson, was replaced by Sammy Solis and then Shawn Kelley, who allowed Grandal, Kendrick and another runner to score, sealing the Nationals' fate. Perez finally got the last out in a nightmare inning that had seen six men take the mound, none of them facing more than two batters, in a clear display of the dangers of over-managing.

Treinen was named the Nationals' closer at the end of spring training in 2017, replacing Melancon who had left via free agency. However, he was unable to hold the job for long, as after recording saves in his first two outings, he suffered a first blown save on April 6th, and recorded a save in spite of allowing two runs the next day. As he continued to struggle, he was moved to a less stressful role, but still ended April with an ERA of 9.00. His ERA was still at 6.11 by the end of June, after he suffered another blown save and a loss on June 29th. He did not give a run in first three games in July, but with the team's bullpen collectively sporting an ERA well over 5.00, he was traded back to his first organization, the Oakland Athletics on July 16th, alongside prospects Sheldon Neuse and Jesus Luzardo, in return for proven relievers Ryan Madson and Sean Doolittle. The move to the west coast provided him with another chance to prove his mettle in late-game situations, away from the pressure of a team expected to contend for a World Series title. he pitched a lot better for the A's, going 3-4, 2.13 in 35 games, with 13 saves.

Treinen had his best season with the Athletics in 2018, making the All-Star team for the first time and receiving consideration for both the Cy Young Award and MVP Award. He led a surprisingly good Oakland bullpen by going 9-2, 0.78 in 68 games, with 38 saves. In 80 1/3 innings, he allowed just 456 hits and 21 walks, while striking out 100 batters. He was a major factor in the A's making it to the postseason as the second wild card team in the American League. However, in the Wild Card Game against the New York Yankees on October 3rd, he came in in relief of Fernando Rodney in the 6th inning after the veteran had given up a pair of doubles and a wild pitch to make the score 3-0 in favor of New York. He walked Giancarlo Stanton, then allowed a stolen base, a two-run triple to Luke Voit and a sacrifice fly to Didi Gregorius to put the game out of reach at 6-0. Oakland eventually lost, 7-2. He filed for salary arbitration after the season and his case was one of the rare ones to reach the hearing stage; he was successful, receiving a salary of $6.4 million; Oakland had offered $5.6 million.

In 2019, Treinen was unable to reproduce his superlative numbers from the year before, falling back to being a useful but unspectacular reliever. He went 6-5, 4.91 in 57 games, with 16 saves. He struck out 59 batters in 58 2/3 innings, but issued a high number of walks - 37. His struggles seemed to come from issues of mechanics, but they eventually led to shoulder issues. The A's repeated as a wild card team but he was not used in the postseason, as he was injured by that time. After the season, the A's did not offer him a new contract, making him a free agent and on December 15th he signed a one-year deal with the Los Angeles Dodgers for $10 million.