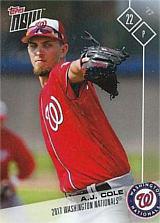 A.J. Cole is a pitcher who was drafted by the Washington Nationals in the 4th round of the 2010 amateur draft out of high school. He pitched only one game for the Vermont Lake Monsters that season, giving up a hit and a walk in an inning, He spent all of 2011 with the Hagerstown Suns of the South Atlantic League, where he was 4-7, 4.04 in 20 games, but showing good stuff with 108 strikeouts in 89 innings against only 24 walks. On December 22, 2011, he was one of four prospects traded by the Nationals to the Oakland Athletics for All-Star pitcher Gio Gonzalez; joining him were Brad Peacock, Tom Milone and Derek Norris. He pitched well for the Burlington Bees of the Midwest League, going 6-3, 2.07 in 19 starts, but struggled after a promotion to the higher caliber California League at the end of the year, as his record was 0-7, 7.82 in 8 starts for the Stockton Ports.

After the season, the Nationals re-acquired him, getting him and fellow pitching prospect Blake Treinen in a three-team deal on January 16, 2013 that also saw Mike Morse go from Washington to the Seattle Mariners, and John Jaso head from Seattle to Oakland. Cole split the 2013 season between the Potomac Nationals of the Carolina League and the Harrisburg Senators of the Eastern League, ending up with a record of 10-5, 3.60 in 25 starts. In 2014, he began the year at Harrisburg, where he went 6-3, 2.92 in 14 starts, then got a promotion to the AAA Syracuse Chiefs, where he was 7-0 in 11 starts. Between the two stops, his record was a sparkling 13-3, 3.16, with 111 strikeouts in 134 innings. The Nationals had the best record in the National League that year and did not call him up when rosters expanded in September. He stood no chance of making the team's starting rotation in 2015; with the offseason signing of Max Scherzer, Washington had one of the strongest starting rotations put together by any team in recent years. He returned to Syracuse and had no decisions and a 2.40 ERA in 15 innings when he was called up in late April, earlier than anticipated, because Scherzer had to miss a start for a minor injury.

Cole made the Nats' Opening Day roster as the fifth starter in 2018. In his first game of the year, against the Atlanta Braves on April 3rd, he hit his first career homer off Julio Teheran in the 2nd inning. He had less success off the mound, as he gave up 10 runs in just 3 2/3 innings and was charged with his team's first loss of the season. He made one more start then was moved to the bullpen when Jeremy Hellickson took over the fifth starter spot. Cole had an ERA of 13.06 and had already allowed 6 homers, most in the National League, when the Nationals DFAed him on April 20th. Three days later, they sold his contract to the New York Yankees. A.J. made 28 relief appearances for the Yanks, going 3-1, 4.26 in 38 innings. He was claimed on waivers by the Cleveland Indians, pitching 25 times in relief with a 3-1, 3.81 record. Outrighted off the 40 man roster, the Toronto Blue Jays signed him to a minor league deal in December.