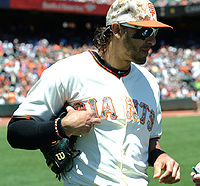 Michael Morse was drafted out of high school in the 3rd round in 2000 by the Chicago White Sox. He was signed by scout Jose Ortega and made his pro debut that summer.

After having been traded from the Chicago White Sox to the Seattle Mariners in the Freddy Garcia deal, made his Major League debut in 2005 with the M's and hit .278 in 72 games. However, his range at shortstop was just adequate, and he made 12 errors in 55 games. With Yunieski Betancourt rapidly developing into the Mariners' starting shortstop, the team decided to convert Morse into an outfielder. In July 2006, Morse underwent knee surgery

He played only sparingly in the major leagues in 2007 and 2008, only getting into 14 games over the two seasons. After starting 2009 in the minors, he was traded to the Washington Nationals for Ryan Langerhans on June 28th. He found a home as a back-up outfielder and first baseman in the nation's capital, logging 32 games with a .250 average his first season, and returning in the same role in 2010. In 2011, he took over as the Nationals' first baseman after Adam LaRoche went down with an injury early in the year, and he had a tremendous season. In 146 games, he hit .303/.360/.550, with 36 doubles, 31 homers and 95 RBI.

Morse was sidelined by a back injury in spring training in 2012, then aggravated the injury while on a rehabilitation assignment with the Class A Hagerstown Suns on April 9th. The only option for the problem was an extended rest period. He was finally added to the Nats' active roster on June 1st. Later that season, it appeared as if he had achieved an 18-game hitting streak, but a late scoring change trimmed it in half. On August 2nd, his only hit of the day was a hard-hit grounder that Philadelphia Phillies shortstop Jimmy Rollins deflected into center field. However, a week later, the official scorer reversed his decision on the play, after the Phillies appealed the call to the league office, calling it an error on Rollins. That gave Morse an "ofer" that day. He had hit in every game since, but had only a nine-game and a seven-game streak as a result of the scoring change. With LaRoche back in the line-up and playing well that year, Morse played mainly left field and right field. While he was not as productive as in his previous season, he continued to be a dangerous hitter in the middle of the Nats' line-up. On September 29th, he hit an unusual grand slam off Kyle Lohse of the St. Louis Cardinals. His long fly ball to right field with the bases loaded in the 1st inning was originally called in play, although Morse had seen it go out; the baserunners stopped, and he almost passed one when reaching second base, having to turn around quickly and being tagged out before he could return to first base. However, after a video review, the umpires ruled that the ball had in fact left the ballpark; Morse returned to home plate, pretended to swing without a bat, then trotted around the bases, where he was greeted by his teammates. He ended up playing 102 games and hitting .291 with 18 homers and 62 RBI. In the NLDS, he went 5 for 19 with a homer as the Nationals lost to the St. Louis Cardinals in five games.

After the 2012 season, the Nationals were aggressive in addressing what they saw as the last few holes that kept them from reaching the World Series, and as part of a series of moves re-signed 1B LaRoche and acquired CF Denard Span. With Rookie of the Year Bryce Harper and veteran Jayson Werth set to play the two corner outfield spots, Morse was the odd man out. On January 16, 2013, the Nationals decided to trade him to the Seattle Mariners as part of a three-team trade that saw catcher John Jaso leave Seattle for the Oakland Athletics, and the Nats acquire two young pitchers from the A's in A.J. Cole and Blake Treinen. The Mariners were hoping to anchor their offense around Morse, but he disappointed, hitting only .226 with 13 homers and just 27 RBI in 76 games, missing time with an injury. On August 30th, he was traded to the Baltimore Orioles in return for young OF Xavier Avery. He only played 12 games for Baltimore, going 3 for 29 (.103). A free agent after the season, with his stock having fallen way off, he had to settle for a one-year contract with the San Francisco Giants in the hope of resuscitating his career.

Resurrect his career he did with an excellent season with San Francisco in 2014. As the team's regular left fielder, he played 131 games, hitting .279 with 32 doubles and 16 homers, scoring 48 runs and driving in 61, for an OPS+ of 130. Unfortunately, he suffered an injury late in the year that meant he missed the first two rounds of the postseason, and could not play the field when he returned. Still, he contributed some big hits as a pinch-hitter and designated hitter as the Giants won their third World Series title in five years, defeating the Kansas City Royals in seven games in the Fall Classic. His biggest hit of the postseason was a pinch homer off Pat Neshek of the St. Louis Cardinals in Game 5 of the NLCS on October 16th which tied the score at 3-3 and set the stage for Travis Ishikawa, who had replaced him as the starting left fielder, to end the series with a walk-off homer in the bottom of the 9th.

A sought-after player once again, Morse cashed in on his comeback by signing a two-year deal with the Miami Marlins on December 17th, worth $16 million. He was slated to move to first base and bat clean-up for his new team but things did not go as he expected in 2015. He was only hitting .211 with a pair of homers on May 23rd when he was felled by an injury which put him out of action until the beginning of July. When he returned, he no longer had his starting job waiting for him, as rookie Justin Bour had hit quite well in his absence. Reduced to a bench role, he played sparingly until on July 30th, he was sent to the Los Angeles Dodgers along with P Mat Latos, another costly off-season acquisition, in a move clearly designed to shed salary; the Marlins received three minor leaguers in exchange, Victor Araujo, Jeff Brigham and Kevin Guzman. He was hitting .213 with 4 homers and 12 RBIs in 53 games. It turned out that the Dodgers had only acquired Michael in order to put their hands on Latos, as they immediately had him designated for assignment and on July 31st, they sent him to the Pittsburgh Pirates in return for Jose Tabata; Pittsburgh was seeking a right-handed complement to Pedro Alvarez at 1B. In 45 games with the Pirates, he hit .275 with 1 homer and 7 RBIs. he also had a hit as a pinch-hitter in the National League Wild Card Game against the Chicgo Cubs. He stayed with the Pirates in 2016 but was released on April 21st after starting the season 0 for 8.

He returned to the Giants in spring training of 2017, but his comeback attempt hit a roadblock on March 20th when he sustained a hamstring injury in an exhibition game. While he had a good shot of making the team before the injury, he now faced a minor league rehabilitation with no guarantee of being called up once healthy. He did make it back at the end of April and in 24 games hit .194. His season ended on May 29th when he suffered a concussion while trying to break up a violent brawl between former teammate Bryce Harper of the Nationals and pitcher Hunter Strickland and ended up being leveled by pitcher Jeff Samardzija. He had already planned to retire before he received the offer to play for the Giants, and the injury just hastened his decision to call it a day.