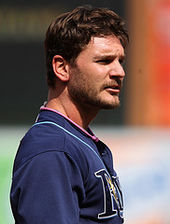 Catcher John Jaso was selected by the Tampa Bay Devil Rays in the 12th round of the 2003 amateur draft. He was signed by scout Craig Weissmann and began his pro career with the Hudson Valley Renegades that summer.

Jaso was regularly used as the Rays' leadoff hitter during 2010, a rarity for a catcher in today's game. He was not the prototypical lead-off man, given his lack of outstanding speed, but manager Joe Maddon liked his ability to draw walks and get on base, setting the table for the sluggers who followed in the Rays' line-up that season. He got to play semi-regularly, hitting .263 in 109 games with a .372 on-base percentage, as Kelly Shoppach and Dioner Navarro both hit below .200. Shoppach hit even worse in 2011, but Jaso also saw his batting average and on-base percentage fall significantly.

Jaso was traded to the Seattle Mariners on November 27, 2011, in return for P Josh Lueke. In limited duty in 2012, he showed a propensity for driving in key runs, earning a following and the moniker of "The Cult Hero." He hit .276 in 108 games for the M's, hitting 19 doubles and 10 homers, driving in 50 and scoring 41. After the season, however, the Mariners made a number of moves that meant that young Jesus Montero, who had also played at first base and DH during his rookie season, would be the full-time catcher in 2013. That made Jaso redundant, and on January 16, 2013, Jaso was sent to the Oakland Athletics in a three-team trade that saw OF Mike Morse go from the Washington Nationals to Seattle, and young pitchers A.J. Cole and Blake Treinen head from Oakland to the nation's capital. For his part, Jaso headed to a situation where he could be the starter, the A's having traded veteran Kurt Suzuki during the previous season, while rookie Derek Norris had failed to establish himself as a full-time player. However, he played only a half-season for the A's in 2013, playing 70 games during which he hit .271 with 3 homers and 21 RBIs but his season as ended by an injury on July 24th. He bounced back to play 99 games in 2014, hitting .264 with 9 homers and 40 RBIs. However, there was a three-way battle for playing time at catcher in Oakland that year, with Stephen Vogt and Norris also in the picture. Jaso started only 34 times behind the plate, also getting 32 starts at DH.

On January 10, 2015 Jaso, minor league shortstop Daniel Robertson and minor league outfielder Boog Powell were traded to Tampa Bay for Ben Zobrist and Yunel Escobar. He played 70 games for Tampa Bay that season after being injured on Opening Day, April 6th. In that game, he collided with the Baltimore Orioles' Ryan Flaherty at second base and sprained his wrist. He did not return until July 7th, but was the team's most-used DH for the remainder of the season. He hit .286 with 5 homers and 22 RBIs, with an excellent OBP of .380. A free agent after the season, on December 23rd he signed a two-year deal with the Pittsburgh Pirates worth $8 million. The Pirates were planning to use him at first base, a position vacated when incumbent Pedro Alvarez was not offered a contract for 2016. On September 28th that year, he beame the first player to hit for the cycle in the history of PNC Park when he pulled off the feat against the Chicago Cubs, contributing to a rare 8-4 loss by the division champions. It was the first cycle by a Pirates player since Daryle Ward had hit one in 2004. He hit .268 in 132 games that season, the most of his career, with 8 homers and 42 RBIs. He had another busy year in 2017, in what turned out to be his final major league season, as he played another 126 games and hit .211 with 10 homers and 35 RBIs. The home run total matched his career high.

His grandfather Michael Bajo played in the minors.