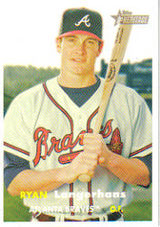 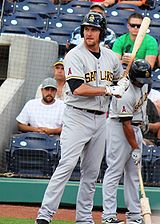 Ryan Langerhans comes from a family with great athletic lineage: his father is Texas's all-time winningest high school baseball coach and also played baseball at the University of Texas. Ryan, who played for his dad in high school, had committed to UT as well before deciding to sign a pro contract out of high school.

Langerhans was drafted by the Atlanta Braves in the 3rd round of the 1998 amateur draft. He was signed by scout Charlie Smith and made his pro debut that summer.

Langerhans stepped in as the Braves 2005 leftfielder (playing some centerfield and right field too). He hit .267 with 8 HR's and 42 RBI's and a 99 OPS+. He was a good percentage outfielder with average range.

He was the MVP of the 2017 National Baseball Congress World Series, playing for the Kansas Stars, the first former major leaguer to win the title since Bob Boyd in 1965.