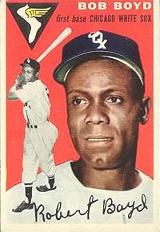 "Boyd can really handle that mitt around first base. I know he's good enough defensively for the big leagues and he has real speed." - Paul Richards, to The Sporting News, 1956

Bob Boyd was poised to break into the Baltimore Orioles' rich tradition of power-hitting first basemen, since the franchise switch from the St. Louis Browns in 1954. The names Jim Gentile, Boog Powell and Eddie Murray are readily recalled. Boyd, the team's first baseman from 1956 to 1960, was a .293 career left-handed hitter who was tagged with the nickname "Rope" for the line drives that came off his bat.

A .300 plus hitter for five straight years in the Negro Leagues before being signed by the Chicago White Sox in 1950, Boyd continued to blister the ball in the high minors in the early 1950s, with his .320 average in 1952 for the Seattle Rainiers winning the Pacific Coast League batting title. By the mid-1950s, he was approaching 30 and still in the minors. This prompted Doc Young in Jet Magazine to write, "Boyd's case is typical of Negro players who linger in organizations unwilling to give them a chance." Boyd himself would state years later: "The early black players had to do much better than the white players to make the majors."

When he was drafted by the Baltimore Orioles on November 27, 1955 in the Rule V draft and finally given a chance to play on a regular basis, Bob hit over .300 in four of his last five seasons, with a career-high .318 in 1957, the fourth-best in the American League that season. He once lined seven straight base hits against the Cleveland Indians in a 1958 doubleheader. In his last big league season, he was, at 41, the oldest player in all of Major League Baseball. For several years after last appearing in the majors with the Kansas City Athletics and Milwaukee Braves in 1961, he continued to "rope" line drives for the Rapid Transit Dreamliners, a top-flight national power semi-pro team.

After his baseball playing days, Boyd drove a bus for the Dreamliner Bus Company before retiring in Wichita, KS, where he died on September 7, 2004 at 84 years of age.