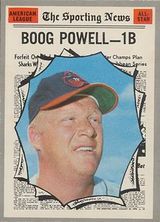 “In the South they call little kids who are often getting into mischief buggers, and my dad shortened it to Boog.” - Boog Powell, on his nickname's birth

Boog's brother, Charles Powell, played outfield in the Baltimore Orioles chain in 1962-1963 [1]. Boog is also the stepbrother of Carl Taylor; Powell and Taylor both played in the 1954 Little League World Series but their team did not advance to the finals of a Series that produced five major leaguers.

He jokingly called himself "the world's largest blood clot" when he played for the Cleveland Indians in 1975 because of their all-maroon uniforms. His first baseball card appearance was in the 1962 Topps set. Even in his 70s, he remains a fixture around Camden Yards, home of the Orioles, as his restaurant, Boog's BBQ, is one of the most popular places to eat at the ballpark.