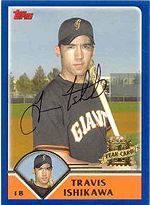 Travis Ishikawa was named by some sources as the second Japanese-American player in Major League Baseball history, following Lenn Sakata and briefly edging Shane Komine. Don Wakamatsu is listed by some other sources.

In high school, Ishikawa had led his team to a state title as a junior and second place as a senior. Ishikawa was drafted by the San Francisco Giants in the 21st round of the 2002 amateur draft. He was signed by scout Matt Woodward and spent his first season in professional baseball with two teams - the Salem-Keizer Volcanoes (.307/.347/.386) and AZL Giants (.279/.364/.441, 7 for 7 in steal attempts). Baseball America rated him the #10 prospect in the Northwest League.

Normally a first baseman, Ishikawa was pressed into service as the Giants' starting left-fielder during the 2014 Postseason, because of an injury to regular Michael Morse. Although his defensive play was only mediocre, he got some key hits, none more important than the three-run walk-off homer he hit off Michael Wacha of the St. Louis Cardinals to break a 3-3 tie in the bottom of the 9th in Game 5 of the NLCS that sent the Giants to the 2014 World Series.