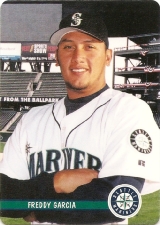 Lou Piniella once told a story about Freddy Garcia. When Garcia came up in 1999 when Piniella managed the Seattle Mariners, Piniella went to take the kid out of a game because he was getting hit pretty well. Garcia didn't think so and yelled at Piniella as he walked out to get back in the dugout and that he was doing fine. Piniella took it calmly and walked back. However, in Garcia's next start, the opposition was clobbering Garcia and Piniella responded by sitting back in the dugout where the fans couldn't see him, smoking a cigarette and relaxing. After 10 runs had scored, he figured Garcia had learned his lesson and he then went out and took him out of the game. Garcia never complained again when being removed from the game. He had come to the Mariners as one of the youngsters obtained from the Houston Astros for the great Randy Johnson in 1998 and made his major league debut with the Mariners at the start of the 1999 season. He ended up with an excellent rookie season, though, going 17-8, 4.07 in 33 starts, pitching 201 innings

The Mariners traded traded Garcia to the Chicago White Sox on June 27, 2004, along with C Ben Davis, in return for Mike Morse, Miguel Olivo and Jeremy Reed. He had been 4-7 but with a solid 3.20 ERA with Seattle, then improved to 9-4 with the White Sox, even though his ERA rose to 4.46. In total, he was 13-11, 3.81 between the two clubs. In 2005, he was one of the teams's pillars though, as the Pale Hose rose a very solid starting rotation all the way to a World Series title. Garcia was 14-8, 3.87, then beat the Boston Red Sox in his only start of the ALDS, threw a complete game victory against the Los Angeles Angels of Anaheim in the ALCS, and then pitched 7 shutout innings to win Game 4 of the World Series against the Houston Astros.

The White Sox were heavily criticized when they traded Garcia to the Philadelphia Phillies after the 2006 season, when he had gone 17-9, 4.53. The trade was seen as building for the future at a time when the Sox were only a couple years removed from being World Series champions, and fans wondered if that meant the White Sox were raising a white flag already. However, Garcia was beset by injuries with his new team and contributed little to the Phillies' 2007 division title, going 1-5 in 11 starts and missing his team's miraculous late-September push to overtake the New York Mets. He then had two more injury-riddled seasons, going 1-1 in 3 starts for the Detroit Tigers in 2008, and 3-4 in 9 starts back with Chicago in 2009. However, Freddy made a remarkable comeback in 2010, making 28 starts for the White Sox and ending with a record of 12-6, 4.64.

In 2011, short of healthy starters, the New York Yankees decided to bring a couple of older pitchers to spring training as insurance in case not everyone was ready. Freddy and Bartolo Colon both made the club and then made huge contributions at the back of the starting rotation, with Garcia going 12-8, 3.62 in 26 games and contributing 146 2/3 innings to the AL East champions. He started Game 2 of the ALDS­ against the Detroit Tigers but was charged with the loss after giving up 4 runs in 5 1/3 innings. He was back with the Yankees in 2012, first as a long reliever, but then getting another opportunity to start after a few injuries. On April 10th, he tied an American League record with 5 wild pitches in a game. On August 5th, he picked up the 150th win of his career when he beat his original team, the Seattle Mariners, 6-2. Overall, his results were disappointing, however: he pitched 30 times (making 17 starts) and went 7-6, 5.20 in 107 1/3 innings. He was not used in the postseason and became a free agent at the end of the year.

On January 28, 2013, he signed a minor league deal with the San Diego Padres, but failed to make the team after competing for the fifth starter's job, going 1-4, 8.71 in 6 starts, and was released on March 24th. Five days later, he signed a minor league contract with the Baltimore Orioles. He did extremely well in his first month with the Norfolk Tides of the International League, going 4-0, 2.57, and a sparkling 21 to 2 K/W ratio to earn a call to Baltimore on May 4th. That day, he was brilliant against the Los Angeles Angels of Anaheim, not allowing a hit over the first 6 innings before tiring and giving up a couple of runs in the 7th. He left with a 3-2 lead but ended up with a no-decision as the Orioles eventually won the game, 5-4, in 10 innings. He picked up his first win on May 25th, defeating the Toronto Blue Jays, 6-5. He went 3-5 with a 5.77 ERA in 11 games for the Orioles, then on August 23rd was purchased by the Atlanta Braves. He exceeded expectations by pitching extremely well for Atlanta, with a 1.65 ERA and a 20/5 K/W ratio in 27 1/3 innings. As a result, the Braves gave him the ball to start Game 4 of the NLDS on October 7th. Facing the Los Angeles Dodgers, he gave up 2 runs in 6 innings then was replaced by pinch-hitter Jose Constanza in the top of the 7th, who singled in the go-ahead run for 3-2 Braves lead. However, the Braves' bullpen was unable to hold that lead as Jose Uribe hit a two-run homer in the bottom of the 8th, and the Dodgers won, 4-3, to eliminate Atlanta from the postseason.

Garcia was back with the Braves in spring training in 2014, in contention for a spot in the starting rotation. With two projected starters, Brandon Beachy and Kris Medlen both suffering season-ending injuries in camp, the door should have been wide open for the veteran Garcia. He pitched decently in spring training, with a 4.76 ERA but on March 24th, the Braves released him, in order to save the $1.25 million he would have been due had he been added to the major league roster. What made the move even more strange was that the Braves then turned around and signed Aaron Harang, another veteran, whose stats the previous year had been much worse than Garcia's. However, the Braves proved to be right, as Harang had a great month of April in the majors, while Garcia was unable to find a taker, eventually signing with Taiwan's EDA Rhinos, becoming the highest-paid player in Chinese Professional Baseball League history with a contract calling for $56,000 per month for 7 months.

"His heart is something that comes out when he is on the mound." - Kenny Williams