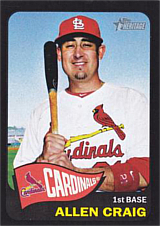 Allen Craig was a 2013 National League All-Star and a key fixture of two St. Louis Cardinals World Series teams. Following a trade to the Boston Red Sox in 2014, his production fell off a cliff, leading to his abrupt big league departure just one year later.

Craig hit .485/.541/.758 with 11 runs scored and 10 RBI for the USA in the 2002 World Junior Championship but fielded .857 at shortstop. He helped the US win the Bronze Medal. He tied for third in the event in hits (16) and 6th in average but was not an All-Star performer. For the summer, his 35 runs scored were third on the US junior team, 2 behind Delmon Young and Lastings Milledge. On to college, Allen hit .304 with 8 homers and 13 steals as a sophomore at Cal. His junior year, he batted .344. The St. Louis Cardinals and scout Dane Walker took him in the 7th round of the 2006 amateur draft.

Craig was even better in 2009 with the Memphis Redbirds, earning Cardinals Minor League Player of the Year honors working primarily as an outfielder/first baseman. He batted .322/.374/.547 with 26 home runs and 83 RBI despite missing two weeks with a left ankle sprain. He led all St. Louis minor leaguers in homers, RBI, hits (152), total bases (258) and slugging while tyin Charles Cutler for top average. He went 2-for-5 with a homer and 2 RBI in the 2009 Triple-A Baseball National Championship but Memphis fell, 5-4, to the Durham Bulls. He was 4th in the PCL in average behind John Bowker, Matt Murton and Jerry Owens, 4th in home runs (9 back of leader Mitch Jones), 4th in hits and 3rd with 258 total bases (21 behind leader Terry Evans. He was left off the PCL All-Star team as Bowker, Evans and Matt Miller were honored.

Craig debuted in the bigs on April 8, 2010 hitting 7th and playing right field as the Cardinals faced the Cincinnati Reds. He faced Bronson Arroyo in his first at bat and lined out to Scott Rolen, finishing the day 0-for-4. Craig split the season between St. Louis and the minors, being sent down at the end of April when he was hitting only .056 after seven games. He made a couple more brief stays with the big league team in May and July before being called up for good on August 3rd. He began to hit much better as he gained experience and finished the year with a .246 average, 4 homers and 18 RBI in 44 games. He also played 83 games for the AAA Memphis Redbirds, tearing up the PCL with a .320 average, 14 homers, 24 doubles and 81 RBI.

After this strong minor league performance, he started the 2011 season with the Cardinals and was red hot until cut down by injuries. He was hitting .336 in 40 games on June 7th when he was placed on the disabled list with a fractured kneecap. After a short rehab stint, he returned on August 10th and was a quasi-regular for the remainder of the season. He ended the year with a .320/.362/.555 line in 75 games, with 11 homers, 15 doubles and 40 RBI, good for an outstanding OPS+ of 153. He rapped key hits in the postseason, including going 3-for-8 with a homer in the NLCS against the Milwaukee Brewers, and hitting three homers whilst robbing Nelson Cruz of a homer in Game 7 of the World Series, which the Cardinals won over the Texas Rangers. Allen joined select company {Dusty Rhodes, Del Unser and Hal McRae) by collecting RBI hits in three consecutive at bats as a pinch-hitter. He delivered a two-run single batting for Edwin Jackson in the deciding Game 6 of the NLCS off LaTroy Hawkins, then, in Game 1 of the Fall Classic, drove in David Freese with a pinch single against Alexi Ogando. In Game 2, facing Ogando again, he delivered another RBI single, this time breaking a scoreless tie in the bottom of the 7th. Later, his go-ahead home run in the deciding Game 7 propelled Allen to join Hank Greenberg and Kiki Cuyler as the only men in baseball history with three game-winning RBI in a single World Series. For the Series, he batted .263/.417/.737, falling to Freese and his memorable blast in Game 6 for MVP honors.

After the season, Craig had surgery on his knee, missing spring training and the start of the 2012 season while rehabbing. He played his first game on May 1st and quickly became the Cardinals' starting first baseman, given the departure of Albert Pujols via free agency during the off-season, paired with a knee injury to his replacement, Lance Berkman. He hit .307/.354/.522 for a 137 OPS+ in 119 games, with 22 homers and 35 doubles, driving in 92 runs. He was among the National League leaders in average (7th, between Jordan Pacheco and Marco Scutaro), slugging (7th, between Joey Votto and Aaron Hill), OPS+ (9th, between Aramis Ramirez and Hill) and fielding at first (.995, 3rd, .001 behind leader Gaby Sanchez). He had a pair of hits in the Wild Card Game as the Cards defeated the Atlanta Braves, then went 6-for-19 (.316) with a pair of doubles and a homer when St. Louis upset the Washington Nationals in the NLDS. He was stopped by the pitching of the San Francisco Giants in the NLCS, as he only went 3-for-24 while the Cardinals were eliminated in 7 games.

Heading into the 2013 season, he signed a five-year deal with the Cardinals for $31 million, with an option for a sixth season at $12 million, in a move that indicated Craig was considered a fixture of the team. If they only knew... He made the All-Star team for the first time; batting clean-up, he was one of the Cardinals' key performers as it won the NL Central title, hitting .315/.373/.457 with 13 homers and 97 RBI in 134 games. He suffered a foot injury just as the season was winding down, spraining his foot on September 4th and was unable to play in the regular season after that date. He still finished 8th in the league in both average (between Andrew McCutchen and Troy Tulowitzki) and RBI (between Hunter Pence and Matt Holliday). He missed the first two rounds of the postseason but recovered in time to be added to the Cards' roster for the World Series against the Boston Red Sox, being inserted in the starting lineup as the designated hitter in Game 1. Rookie Matt Adams had filled in ably at first base in his absence. He did well in the Series (6 for 16, a double, a run scored, an RBI) and made some more postseason history. In Game 3, with a tie game (4-all) in the bottom of the 9th and Koji Uehara dealing, "The Federalist" Jon Jay bounced a ball back to Uehara that deflected to Dustin Pedroia at second base. Jarrod Saltalamacchia was able to tag out Yadier Molina attempting to score, then fired to third in an attempt to nab a scampering Craig. The ball sailed into left field, and Red Sox third baseman Will Middlebrooks tripped Craig in his pursuit of the wayward sphere. Daniel Nava, backing up the play, was able to fire home to put the kibosh on Craig winning the game, but everything after the trip was rendered moot when umpire Jim Joyce called obstruction on Middlebrooks, awarding Craig home plate and the Cardinals the only game in Series history to end on an obstruction call. While all of Boston was outraged by this call (which almost all neutral observers considered was the correct one), it ended up being a moot point when the Sox won the series in six.

Craig struggled in 2014, hitting only .237/.291/.346 with 7 homers and 44 RBI after 97 games, while playing mostly right field following the departure of Carlos Beltran via free agency. On July 31st, with the Cards having difficulty generating offense, they traded Allen and another key contributor to their last few postseason teams, pitcher Joe Kelly, to the Boston Red Sox in return for veteran hurler John Lackey and minor leaguer Corey Littrell. Craig played one game for the Red Sox, on August 1st, then had to be placed on the disabled list with a sprained left foot sustained in running out a double. He returned on August 21st and his gift was suddenly gone. Allen hit only .128/.234/.191 in 29 games for Boston, giving him a combined batting line of .215/.279/.315 with 8 homers and 46 RBI. His OPS+ took a plunge from 129 to 66.

He never got back on the horse. Craig started the 2015 season stone cold, as he was hitting only .135 in 24 games on May 9th. The Red Sox decided to assign him to the AAA Pawtucket Red Sox at that point; since he had failed to accrue five years of service time, down he went. He came back for 12 more big league games, hitting .152/.239/.203 on the year. It proved his last big league dalliance. He spent each of the next two years in Pawtucket, outrighted off the 40-man roster before being released in June 2017. He hit fairly well in the San Diego Padres system in 2018, batting .293/.375/.479 with the El Paso Chihuahuas, but did not get the call. He retired during the ensuing spring training to take a front office job with the Friars.