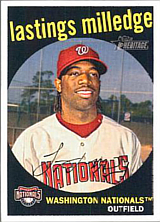 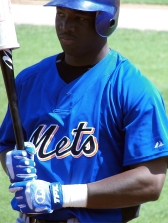 Outfielder Lastings Milledge played in the majors from 2006-2011. He is the brother of minor leaguers Greg Milledge and Tony Milledge.

At age 12, he was a star on the 1997 Little League World Series baseball team that was national runner-up. He hit over .500 as a high school freshman and sophomore. In the 2001 World Youth Championship, Milledge hit .522 with 3 HR and 10 RBI to help lead the team to a Gold Medal. He homered twice in the semifinals against Australia and made the All-Tournament team. In 2002, he was one of only two juniors to be named to the Baseball America High School All-America first team, after hitting .569 with 57 runs, slugging 1.128, driving in 71 in 109 AB and swiping 30 bases. Three days after the state finals (which the team lost), Milledge was expelled by Northside Christian High School. The expulsion was rescinded three weeks later. Lastings had admitted to having relations outside of marriage with his 15-year-old girlfriend. He went into a juvenile arbitration program including community service to avoid prosecution.

The next year, Milledge again was a first-team High School All-American and he hit .414, slugged .818 and stole 43 with a decline year after transferring to Lakewood Ranch High from Northside Christian High. Milledge was walked intentionally frequently, leading to his move to the leadoff spot so that he could run.

Milledge was selected by the New York Mets in the first round of the 2003 amateur draft, the 12th overall pick. After the Mets drafted Milledge, it became known that there were allegations of sexual relations with 12 and 13-year old girls during the 2001-2002 school year. Other teams stated they knew of these before the draft, while New York denied knowledge. They halted talks with Lastings and Mississippi Gulf Coast Community College offered him a shot. As the incidents had been investigated by the local sheriff's department and no charges had been filed, the Mets decided that they would sign Milledge after all. Milledge was signed by scout Joe Salermo in August and made his pro debut that summer.

In 2006, he played 84 games with the Norfolk Tides, where he hit .277/.388/.440. Baseball America named him the most exciting player in the International League and #2 prospect, behind Delmon Young.

In 2006, he was the youngest player in the National League, where he struggled at .241/.310/.380 for the Mets with only 1 steal in 3 tries in 56 games as a corner outfielder. He drew criticism from some in the system when he high-fived fans along the right field line a half-inning after a home run.

While on the disabled list in 2007 for strained ligaments, Milledge was discovered to have used sexist language in a not-yet-released rap CD. The Mets issued a statement that "We disapprove of the content, language and message of this recording, which does not represent the views of the New York Mets." Newsday report on CD Milledge said "I'm going to be me. This is how I'm going to be for the next 20 years, or however long I play the game. But the thing I did grow on is how to handle myself, how to handle the media. I'm a grown man." After his rehab from the injury, Milledge was called up by the Mets in mid-July to replace a man 26 years his senior on the roster, Julio Franco. New York said they planned to make him the starting left fielder until Moises Alou was healthy, something which never happened. For the year, he hit .272/.341/.446 for a 104 OPS+ (his best in the majors through 2011).

After the 2007 season, Milledge was sent to the Washington Nationals in a trade for veterans Brian Schneider and Ryan Church in a trade that divided Mets fans between those who though Milledge did not have a major leaguer's attitude, and those who thought the Mets had been fleeced in terms of the discrepancy in talent between the Milledge and the two players he was traded for. With the Nationals in 2008, he played 138 games, hitting .268/.330/.402 with 24 doubles and 14 home runs, a solid performance for a 23-year-old. Those remain career MLB highs for homers, doubles, steals (24 in 33 tries), runs (65) and RBI (61). His OPS+ was 92, not good for an outfielder. Things got off on the wrong foot in 2009, as he went 4 for 24 in 7 games before being sent down to AAA because of what were rumored to be attitude issues. He hit only .253/.277/.316 in 22 games for the Syracuse Chiefs.

On June 30, he was traded to the Pittsburgh Pirates, with pitcher Joel Hanrahan, in return for outfielder Nyjer Morgan and pitcher Sean Burnett; he would have the worst 2009-2011 run of the four. He was the Pirates' most-used left fielder over the remainder of the season, getting into 58 games with a .291 batting average, although with relatively little power. He had a .333 OBP and .395 slugging percentage for a 94 OPS+. He made no errors in the majors that year. He began 2010 as the Pirates' starting left fielder. In two odd notes, one of his new backups was Church, the outfielder he had been dealt for just 3 years prior, and his new best friend on the team was center fielder Andrew McCutchen, who had been billed as the "next Milledge" when he was coming up in high school. He hit .277/.332/.380 for another 94 OPS+ and fielded .995. For a player once praised as a multi-tool threat, he showed little power (4 HR) or speed (5 SB). He wound up behind Garrett Jones in playing time in right field for the 2010 Bucs and behind Jose Tabata in left. With Pittsburgh having younger outfielders in McCutchen and Tabata, there was little room for Milledge in Pittsburgh.

A free agent, Milledge signed with the Chicago White Sox for 2011 but only went 1 for 4 with a double and a run for them, spending the rest of the year back in AAA with the Charlotte Knights. With Charlotte, he batted .295/.364/.441 with 27 steals in 33 tries, 12 home runs and 10 assists to 1 error. He tied Matt Angle for third in the 2011 International League in steals, behind Rich Thompson and Ezequiel Carrera. 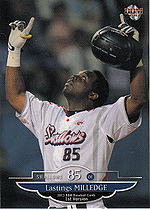 For 2012, Milledge signed with the Tokyo Yakult Swallows. He debuted on Opening Day as their #3 hitter and left fielder. He went 0 for 4 with a walk in a win over the Yomiuri Giants. He finished the season batting .300 with 21 home runs and 65 RBI.

This performance earned him a new three-year, $4.4 million deal with the Swallows. Injuries hampered him over the final two years of the pact, which he combined for 34 games in. Overall, he batted .272 with 39 home runs and 129 RBI.

Lastings returned to the States for a final season in 2017, spent with the Lancaster Barnstormers of the Atlantic League. He retired at season's end.