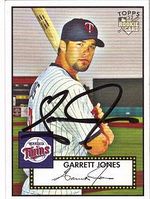 First baseman/outfielder Garrett Jones played eight seasons in the majors between 2007 and 2015. A minor league slugger, he hit over 150 minor league home runs and topped 20 homers in his first extended stint in the majors, even though he spent almost half of the season in the minor leagues. He is a cousin of Ron Coomer.

Jones was selected by the Atlanta Braves in the 14th round of the 1999 amateur draft and made his pro debut that summer with the GCL Braves. After three seasons in the Braves' farm system, he was released and signed with the Minnesota Twins organization. With the Quad Cities River Bandits in 2002, he hit 10 home runs, 4 of which came in a game against the Kane County Cougars on July 14th. The next year, with the Fort Myers Miracle, he hit 18 homers to finish fourth in the Florida State League.

After starting 2004 back with Fort Myers, Jones was promoted to the AA New Britain Rock Cats in late April and went on to lead the team in homers (30) and RBI (92), while tying for the club lead in batting (.311). He spent most of the next four seasons with the AAA Rochester Red Wings, earning several cups of coffee in the majors with the Twins in 2007. He earned his first major league hit in his first big league appearance, on May 15th against the Cleveland Indians, and went 3 for 3 against the Kansas City Royals on September 2nd. Overall, he hit .208 with a pair of home runs and 5 RBIs in 31 games in the majors that year.

Following the 2008 season, Jones was signed by the Pittsburgh Pirates organization, and he began 2009 with the AAA Indianapolis Indians. Called up in late June, he first played right field, then was the Pirates' regular first baseman after Adam LaRoche was dealt just before the trading deadline. Jones became the oldest rookie to hit 20 home runs since Bobby Darwin in 1972. He became the second player ever to hit 20 homers in MLB without hitting one before July; Kevin Maas had been the first. His 21 home runs were not his only solid statistic in what was a great overall season, however: he batted .293. drew 40 walks for a .372 on-base percentage and added 21 doubles to slug .567. He even added 10 stolen bases while being caught only twice. He finished 7th in Rookie of the Year voting.

Jones began 2010 on a strong note as well. He homered twice on Opening Day, the 6th Pirate ever to do so, following Dale Long, Richie Hebner, Willie Stargell, Andy Van Slyke and Xavier Nady. One of the homers landed in the Allegheny River on the bounce - the 28th ball to do so in PNC Park history. He could not sustain the previous year's production over the long haul, but did play 158 games between first base and right field, banging out another 21 homers, with 34 doubles. He hit only .247, dut drove in 86 runs.

On June 2, 2013, Jones bettered his opening day blast from 2010, when he hit a monster home run off Jonathan Broxton of the Cincinnati Reds, the ball landing into the Allegheny River on the fly; it was only the second time this had been accomplished (Daryle Ward had done it first in 2002), but the first by a Pirates player. The home run also came at a key juncture, with one on and two outs to allow the Pirates to tie the game at 4-4; they would eventually win it in 11 innings. Jones was a quasi-regular on the first Pirates team to reach the postseason in 22 years that season, hitting .233 with 15 homers and 51 RBIs in 144 games split between first base and right field. However, disappointed with his falling production, the Pirates acquired veteran Justin Morneau from the Minnesota Twins to play first base down the stretch and Jones was relegated to a back-up role. He did not play at all in the Wild Card Game and was 0 for 2 in two pinch-hitting appearances in the Division Series loss to the St. Louis Cardinals. Seeing the writing on the wall with the Bucs, Jones moved on after the season, signing a two-year contract with the Miami Marlins for $7.5 million, although it was likely to be a challenge for him to put up respectable numbers in vast and home run-adverse Marlins Park.

On December 19, 2014, he was traded to the New York Yankees along with Nathan Eovaldi and Domingo German for Martin Prado and David Phelps. He got to make his first career pitching appearance with the Yankees on May 23, 2015, getting the last two outs of a 15-4 loss to the Texas Rangers after having entered the game as a pinch-hitter for Mark Teixeira and playing at first base for a couple of innings.