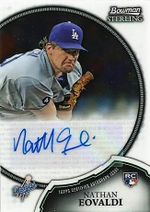 Nathan Eovaldi was an 11th-round choice by the Los Angeles Dodgers in the 2008 amateur draft. He was signed by scout Chris Smith and was 0-1, 0.84 in seven games in the minor leagues that year all in relief. Eovaldi then became a starter with the Great Lakes Loons of the Midwest League in 2009, posting a 3-5 record, 3.27 in 96.1 innings. In 2010, he again pitched fewer than 100 innings, this time with three different teams, due to some rehabilitation outings at lower levels, most of his time being spent with the Inland Empire 66ers of the California League. He was 4-6, 4.30 overall.

After this unassuming beginning in the professional ranks, Eovaldi, vaulted all the way to the major leagues in 2011. Assigned to the AA Chattanooga Lookouts to start the year, Eovaldi was 6-5, 2.62 in his first 20 games, pitching 103 innings, giving up only 76 hits and striking out 99. On August 6th, he was called up to the big leagues to take the place of the injured Rubby De La Rosa in the Dodgers' starting rotation. Facing the Arizona Diamondbacks, he struck out 7 over 5 innings, giving up only two runs, and was credited with his team's 5-3 win. He also got a hit in his first major league at bat, against Joe Saunders. He made 10 appearances - 6 of them starts - for the Dodgers that first season, ending with a record of 1-2, 3.63. In 2012, he pitched 9 times for Chattanooga, with a record of 2-2, 3.09, then returned to Los Angeles on May 29th. In 10 big league starts, he was only 1-6, 4.15. On July 25th, he was traded along with Scott McGough to the Miami Marlins in return for Hanley Ramirez and Randy Choate. His debut with the Marlins on July 28th was a successful one, as he allowed just one run in 5 1/3 innings in a 4-2 win over the San Diego Padres. He went 3-7 in 12 starts for the Marlins to finish the year at 4-13, 4.30.

Eovaldi had won a spot as the Marlins' number 2 starter in spring training in 2013 but was felled by a shoulder injury on the eve of opening day and had to start the year on the disabled list. He was only able to return on June 18th, but proved to be extremely solid from that point forward, even if wins were hard to come by. On August 10th, he had an excellent 3.19 ERA in 9 starts, but only a 2-2 record to show for it. That day he lowered his ERA even further with 7 shutout innings against the Atlanta Braves, who were on a 14-game winning streak, but he left with the ballgame still scoreless and did not get credit for the Marlins' 1-0 win on a 9th-inning run.

On December 19, 2014, he was traded to the New York Yankees along with Garrett Jones and Domingo German for Martin Prado and David Phelps. The Yankees had bet that because of his good stuff, he could have much better results than what he had shown so far if given solid support, and they were proved right in 2015. In spite of an ERA of 4.20, he was 14-3, when he was placed on the disabled list on September 7th, the latest in a string of health issues by members of the team's starting rotation. His record gave him the highest winning percentage in the American League at .824, an ironic result, given his career winning percentage had been an awful .300 entering the season. He also distinguished himself with the velocity of his pitches during the season: he had the highest average fastball velocity among all major league starting pitchers, as well as the most pitches over 100 mph, and he also threw the fastest pitch by anyone not named Aroldis Chapman, a fastball clocked at 101.6 mph. Chapman was in an other-worldly category, having registered the top 77 fastest pitches thrown that year.

He was back in the Yankees' starting rotation in the first half of the 2016 season, but his ERA rose over a full run, to 5.54 after 16 starts. He still managed to keep a decent win/loss record during that span, at 6-6, but that was entirely due to a stretch in late April and May during which he went 6-0, 2.72 in 7 starts. In his next 6 starts, he went 0-4, 9.20 and on July 4th, it was announced that he would be moved to the bullpen for the time being. He earned a win in relief a few days later, then was moved back to the rotation on July 19th and was a winner in his first two starts. He continued to pitch well even if he suffered a couple of losses after that, but on August 10th, he had to leave a start against the Boston Red Sox after a 1-2-3 1st inning because of pain in his elbow. The news turned out to be quite bad, as he had suffered a torn ligament and a torn tendon, necessitating two discrete surgeries, and putting him on the shelf for the remainder of the year and all of 2017 as well. He was 9-8, 4.76 in 24 games, including 21 starts, when he went down. After the season, the Yankees decided to have him designated for assignment rather than wait out until he was ready to pitch again.

Eovaldi was back on a mound in spring in 2018, having joined the Tampa Bay Rays with the objective of making the opening day starting rotation. However, he underwent an operation on March 30th to remove loose bodies in his elbow, then made four rehab starts in the minors before finally returning to action on May 30th, starting a game against the Oakland Athletics. It was worth the wait, as he pitched six hitless innings before manager Kevin Cash removed him as a measure of precaution, a move with which Eovaldi said he was comfortable. Reliever Wilmer Font allowed a 7th-inning single to Jed Lowrie which turned out to be Oakland's sole hit of the game as Nathan received credit for the 6-0 win. On July 8th, he was at it again, this time facing the New York Mets, as he retired the first 18 batters he faced before Brandon Nimmo lined a single to right to lead off the 7th. He ended up a 9-0 winner and needed just 79 pitches to get through 7 innings. He was 3-4, 4.26 after 10 starts when on July 25th he was traded to the Boston Red Sox in return for P Jalen Beeks. That turned out to be a crucial acquisition for the Sox, as he went 3-3, 3.33 as a starter the rest of the way, to finish a combined 6-7, 3.81. He then had an absolutely brilliant postseason, helping the Sox conquer a World Series title. He made 6 appearances, 2 as a starter and the others in relief and went 2-1, 1.61, his only loss coming at the end of a magnificent outing of 6 innings in relief in Game 3 of the World Series against the Los Angeles Dodgers. He kept the Dodgers from scoring for five frames before finally giving a run in the 8th inning in what was Boston's sole loss of the series. His outing saved the team's bullpen.

Eovaldi became a free agent after the 2018 season and was in high demand given his success of the previous year as he had proved he could be excellent both as a starter and as a reliever. However, the Red Sox always had the inside track, and on December 6th the two sides agreed on a four-year deal worth $68 million. He started off 2019 slowly, with no decisions and an ERA of 6.00 over his first 4 starts, then on April 20th was placed on the injured list because of loose chips in his elbow. He had to undergo surgery, putting him out of action for what was initially thought to be four to six weeks, but he only returned on July 22nd. By that point the Red Sox badly needed bullpen help, which was the role he was given for the next month, only returning to the starting rotation on August 18th, four days after finally earning his first win of the season. He ended the year at 2-1, 5.99 in 23 games as he never really got going. Still he was counted on to be one of the team's top pitchers in 2020 and was given the opening day starting assignment, as other better-known names all fell by the wayside. He put up a great performance on July 24th against the Baltimore Orioles, allowing just 1 run in 6 innings; he was also helped by a Red Sox offense firing on all cylinders as they hit 8 doubles on their way to a 13-2 win. In a bizarre twist, he pitched part of the game wearing uniform number 7 and not his normal 17, as he apparently changed jerseys between innings and accidentally put on one with his battery-mate Christian Vazquez's number.

Eovaldi was Boston's Opening Day starter for the second year in a row in 2021, taking the loss as the Red Sox fell to the Orioles, 3–0. On July 4th, he was named to the American League roster for the MLB All-Star Game, his first appearance in the midsummer classic.