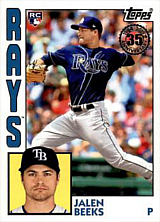 Pitcher Jalen Beeks was drafted by the Boston Red Sox in the 12th round of the 2014 amateur draft, out of the University of Arkansas. He quickly established himself as one of the top pitching prospects in the organization and made his major league debut with the Sox on June 7, 2018, giving up 6 runs in 4 innings to lose a spot start against the Detroit Tigers, 7-2. He made one more appearance with the team, pitching in relief on July 10, then, on July 25, he was traded to the Tampa Bay Rays in return for veteran starter Nathan Eovaldi.

Beeks was roughed up in his first game for the Rays, July 28, when he gave up 8 runs in 3 1/3 innings against the Baltimore Orioles. The Rays had decided to use him mainly as one of the "middle men" during their characteristic "bullpen days", when a reliever was asked to start the game but was not expected to pitch deep into it. It was in such a situation that he recorded his first career win on August 7, when he gave up 2 runs in 5 innings of relief in a 4-2 win over the Los Angeles Angels. After a few more five-inning relief stints, he beat his former team, the Red Sox, for his second win on August 19, this time tossing 4 innings of one-hit ball in a 2-0 win after taking over for starter Diego Castillo with two outs in the 2nd inning. In 12 appearances, he was 5-0, 4.47 with 37 strikeouts in 44 1/3 innings. He split 2019 between Triple A Durham and the big league club, with a 6-3, 4.31 mark in 104 1/3 innings as a Ray.