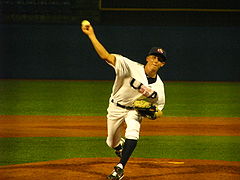 Scott McGough made his major league debut in 2015.

He is the son of Tom McGough. Scott hit .413 as a high school senior and stole 27 bases. A shortstop, he was named All-Area by the Pittsburgh Post-Gazette and taken in the 46th round of the 2008 amateur draft by the Pittsburgh Pirates. McGough went on to college instead.

McGough was taken by the Los Angeles Dodgers in the fifth round of the 2011 amateur draft. The scout was Henry Jones. He made his pro debut on June 22nd of that summer with the Ogden Raptors. He went a combined 1-5, 2.77 in his first season, also spending time with the Great Lakes Loons of the Midwest League. All 26 of his appearances were in relief and he picked up 10 saves between the two teams, striking out 33 in 26 innings. In 2012, he was assigned to the Rancho Cucamonga Quakes of the California League to start the year, and went 3-5, 3.99 in 35 relief appearances, with 5 saves. On July 25th, he was traded to the Miami Marlins along with Nathan Eovaldi in return for Hanley Ramirez and Randy Choate.

McGough made his major league debut for the Marlins on August 20, 2015, as a relief pitcher against the Philadelphia Phillies. He replaced Brad Hand in the top of the 7th with a comfortable 8-1 lead, but proceeded to give up 3 runs on 5 hits in two-thirds of an inning before being replaced by Bryan Morris. Miami held on to win, 9-7.