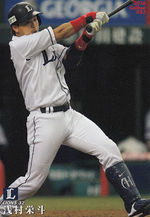 Hideto Asamura led the Pacific League in RBI and OPS his fourth season in the circuit.