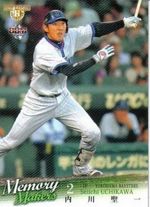 Seiichi Uchikawa won batting titles in both of Japan's top leagues and won a MVP award in 2011.

Moved to first base full-time in 2008, Uchikawa had a huge season, hitting .378/.416/.540 with 37 doubles, 14 homers and 83 runs. He led the Central League in average (.031 ahead of Norichika Aoki, doubles, hits (189, 4 ahead of Kenta Kurihara) and OBP (.003 ahead of Aoki). He was 7th in the CL in runs, 7th in total bases (270) and 5th in slugging. He made his first All-Star team and went 4 for 5 in the 2nd All-Star Game. He broke Bobby Rose's 9-year-old record of .369 for the best average by a right-handed hitter in CL history. Uchikawa made the Best Nine at first base, beating out MVP runner-up Michihiro Ogasawara by a wide margin. He finished 4th in voting for the 2008 Central League Most Valuable Player Award behind Alex Ramirez, Ogasawara and Seth Greisinger.

Uchikawa was a productive part-time player for Samurai Japan when they won the 2009 World Baseball Classic; he appeared in left field, at first base and at DH. He went 6 for 18 with 2 walks, a double, homer, 3 runs and 4 RBI, posting a better OPS than any Japanese regular except Hiroyuki Nakajima. His 2-run homer off Won-sam Jang was the lone Japanese circuit clout in their games in the US. In the finale, Uchikawa scored twice in Japan's 5-3 win over South Korea. He got the winning run in the 10th, opening with a single off Chang-yong Lim and coming home on a Ichiro Suzuki hit.

In the summer of 2009, Uchikawa batted .318/.369/.491 with 32 doubles and 17 home runs. He made his second straight All-Star team and Best Nine (this time as an outfielder alongside Aoki and Ramirez). He made the CL top 10 in average (2nd, 4 points behind leader Ramirez), doubles (tied for 5th with Takahiro Arai), hits (160, 6th between Aoki and Ogasawara), total bases (247, 9th), double play grounders (16, tied for 4th with Kazuhiro Wada), OBP (6th between Masahiko Morino and Tomoaki Kanemoto) and slugging (9th, between Morino and Hayato Sakamoto).

A free agent, he signed with the Fukuoka Softbank Hawks for 2011. He hit .338/.371/.485, becoming the second player to win both CL and Pacific League batting titles (Shinichi Eto had done it in 1964 and 1965 in the CL and 1971 in the PL). He finished 19 points ahead of batting average runner-up Yoshio Itoi, was 7th in RBI (74, between Jose Fernandez and Tadahito Iguchi), tied for 9th in home runs (only 12, but power numbers were down across Japan as a new baseball was being used), total bases (208, 10th), sacrifice flies (7, tied for 4th), slugging (3rd behind Takeya Nakamura and Nobuhiro Matsuda) and OBP (5th, between Nakamura and Yuichi Honda). Softbank then won the 2011 Japan Series but lost the 2011 Asia Series to Korea's Samsung Lions Despite only leading in one department, Uchikawa won the 2011 Pacific League Most Valuable Player Award pretty handily (120 of 214 first-place votes, 77 ahead of runner-up Masahiro Tanaka and 757 vote points, 343 ahead of Tanaka). He was the first position player to win the PL MVP in five years, after pitchers Tsuyoshi Wada (2010, Yu Darvish (2007, 2009) and Hisashi Iwakuma (2008). The last position player to win had been Ogasawara, another player who had successfully switched leagues.

In the 2013 World Baseball Classic, Uchikawa hit third and played right field for Japan, which failed to repeat as champions, falling in the semifinals. He hit .348/.400/.525 with 4 runs and 4 RBI in six games; he cracked a 3-run dinger off Rob Cordemans of the Netherlands. Overall, he was second on Japan in average (behind Hirokazu Ibata) and hits, tied Takashi Toritani for second in OBP among the regulars and was 4th in OPS after Ibata, Shinnosuke Abe and Itoi. In the semifinals, he was 2 for 4 in a 3-1 loss to Puerto Rico. With one out and one on in the bottom of the 8th, he singled off Randy Fontanez. On an ensuing attempted double steal, though, Ibata retreated back to 2B quickly while Uchikawa kept on going and was caught in a run-down; Uchikawa blamed himself for the team's loss due to the baserunning miscue, even though he had been one of their better batters.

For the regular season in 2013, the veteran produced at a .316/.377/.477 clip with 19 HR and 92 RBI and made no errors in 177 chances. He was 6th in average (between Hideto Asamura and Akira Nakamura), 8th in slugging (between Dae-ho Lee and Itoi), 10th in runs (76), second in hits (180, 18 behind Yuya Hasegawa), tied with Itoi for second with 33 doubles (5 behind Asamura), tied Hasegawa for 9th in dingers, was 5th in RBI (behind Asamura, Michel Abreu, Andruw Jones and Casey McGehee), led with 23 double play grounders, was third with 272 total bases (after Asamura and Hasegawa) and tied for third with 12 HBP (with Kazuya Fujita and Daichi Suzuki). He joined Sho Nakata and Hasegawa on the Best Nine, his 5th time being selected.

The year he turned 32, Uchikawa batted .310/.355/.479 with 26 doubles, 18 home runs and 74 RBI in 2014 and again made no errors (102 chances, this time splitting time between DH and OF). He was 5th in the PL in average (between Nakata and Lee), 7th in slugging (between Takahiro Okada and Nakata), 6th in RBI and tied for 10th in home runs with Matsuda. He then excelled in the 2014 Japan Series, going 7 for 20 with two doubles and three RBI as Softbank beat the Hanshin Tigers in five games. He was named Series MVP. He was only 1 for 8 in the 2014 Nichi-Bei Series as the NPB All-Stars topped the MLB All-Stars. He was 7th in voting for the 2014 PL MVP, between Dennis Sarfate and Lee but did not make the Best Nine; Nakata, Itoi and Yuki Yanagita were picked in the outfield.

Making Japan's roster for a third World Baseball Classic, he was mostly a bench player, but a productive one. He went 3 for 8 with two doubles, a run and three RBI in the 2017 World Baseball Classic; only Yoshitomo Tsutsugo had a better OPS for Japan. In the victory over Cuba, his sacrifice fly off Miguel Lahera scored Matsuda with what would be the winning run in the 8th. In 2017 NPB All-Star Game 1, he shone off the bench. Pinch-hitting for DH Shohei Otani in the top of the 7th with a 2-1 deficit, he singled off Katsuki Matayoshi and came around on a hit by Despaigne. In the 8th, he singled off Marcos Mateo to bring home Akiyama then scored on a dinger by Haruki Nishikawa. He was named MVP of the game as the PL won, 6-2, thanks to the late offensive burst. In game 2, he started at 1B but flew out against both Tomoyuki Sugano and Takumi Akiyama before leaving in a double switch (Nishikawa replaced him in the lineup, taking over left and LF Okada moved to first base). When teammate Despaigne was named MVP of a 3-1 win, they became the third pair of regular-seaspn teammates (and first pair of PL teammates) to both win MVP in a two-game NPB All-Star Game series; it had previously been done in 1991 and 1995.