Venezuelan outfielder Alex Ramirez had several fine years in the minor leagues, had mixed results in parts of three seasons in the majors, then at the age of 25, was out of the major leagues. He became a star in Nippon Pro Baseball, collecting more hits than any other foreign born player and winning two MVPs.

In 1996, Alex had 169 hits, again leading the Cleveland chain. Spending the whole year in Canton-Akron, he produced at a .329/~.350/.513 line and stole 18 bases but was caught 10 times. He almost had more triples (12) than walks (16). He was third in the Eastern League in average, led in triples and led in hits. He missed the All-Star team as MVP Vladimir Guerrero, slugging leader Adam Hyzdu and total bases leader Todd Dunwoody occupied the three outfield slots.

While Manny Ramirez was leading the 1998 Indians, Alex Ramirez was the star on the farm, leading the organization in homers, RBI and total bases and being named minor league player of the year for the system. He hit .299/~.320/.566 for Buffalo and had one 28-game hitting streak, second-longest in the minors that year (Casey Blake hit in 31 straight). Ramirez homered 34 times, less than International League leader Brian Daubach and helped the team finish first in the North. He made the IL All-Star team. Late in the year, he finally was called up to the majors, getting 8 AB in three games.

In the first NPB All-Star Game of 2007, Ramirez broke a 0-0 tie in the 7th by homering with Kosuke Fukudome aboard; Ramirez won the MVP Award and got 2 million yen for his performance. Tomonori Maeda followed with a homer in the 4-0 Central League win, their fifth in a row.

Ramirez became the third player in NPB history to collect 200 hits in a season when he did so in 2007. He followed Ichiro Suzuki and Norichika Aoki. He laced his 203rd hit on October 8, breaking Aoki's 2-year-old Central League record. He finished the season with 204 hits. He was the first right-handed batter in NPB history to have a 200-hit season. He was the first person to lead the league in hits while playing for a last-place team since Sachio Kinugasa in 1972 and the first RBI leader from a last-place team since Sadaharu Oh in 1975. He finished with a .343/.371/.569 batting line. He was second in average (right behind Aoki), first in doubles (41), 8th in runs (80), led in RBI (122, 20 ahead of Tyrone Woods and Takahiro Arai), led in total bases (338), was 9th in home runs (29), second in slugging (10 points behind Yoshinobu Takahashi) and sixth in OBP. He joined Takahashi and Aoki as the Best Nine outfielders in the CL.

Ramirez signed with the Yomiuri Giants for 2008, signing for approximately one billion yen over two years. On September 21, he collected the 1,338th hit of his NPB career, breaking Wally Yonamine's long-held record for foreign batters.

Ramirez batted .319/.373/.617 in 2008. He was 7th in the Central League in average, 4th in hits (175), 6th in runs (84), 8th in doubles (28), led in RBI (125, 11 ahead of runner-up Shuichi Murata), led in total bases (338, 13 ahead of Murata), second in homers (45, one behind Murata), tied Tomoaki Kanemoto for the most intentional walks (9), was second to Murata in slugging and was 10th in OBP. For his efforts, he was named MVP of the league, the first foreigner to be so honored in the CL since Roberto Petagine, another Venezuelan, in 2001. He also starred in the postseason, hitting .286/.310/.643 in the 2008 Japan Series with 4 doubles and 2 homers in 7 games. In game one, his double off Hideaki Wakui drove in Yomiuri's lone run in a 2-1 loss. In game two, he broke a 2-2 tie in the bottom of the 9th with a game-winning homer off Shinya Okamoto. He homered in a game 3 win as well. In game five, he started Yomiuri's 7th-inning comeback with a hustling double off Wakui and came around to score the tying run. He scored Yomiuri's only run in game 6 against Kazuyuki Hoashi. He won the Fighting Spirit Award as the MVP of the losing team.

Ramirez got 150 hits for the 8th straight season in 2009, breaking Kazuo Matsui's NPB record. He finished the year with a .322/.347/.544 batting line with 35 doubles, 31 home runs and 103 RBI. He won the batting race by .004 over Seiichi Uchikawa. Alex led in hits (186, 8 ahead of Hayato Sakamoto), was third in doubles (behind Masahiko Morino and Tomoaki Kanemoto), led in total bases (314, 21 over Tony Blanco), was tied for third in homers (even with Michihiro Ogasawara, trailing Blanco and Abe), was 4th in RBI and was second in slugging (behind Abe). He did not finish in the top 10 in OBP. He was named to the Best Nine in the outfield, joining Uchikawa and Aoki. He also was named CL MVP, the first repeat winner since Sadaharu Oh in 1976-1977. The next one would not be quite as long a gap as Yoshihiro Maru won in 2017-2018.

In March 2011, Ramirez pledged $1 million to earthquake relief in Japan following the major quake of March 11. During the 2011 season, the veteran hit .279/.322/.452 with 23 home runs and 73 RBI; Japan had switched to a more pitcher-friendly ball before the season, so his offensive numbers did not represent a drop-off in production but rather a change in context. He ended a streak of 489 consecutive times hitting cleanup for Yomiuri, a record for the franchise that had boasted some of Japan's biggest names. He was an All-Star and finished among the CL leaders in average (9th, between Brazell and Akihiro Higashide), home runs (tied for second with Kazuhiro Hatakeyama, 8 behind leader Wladimir Balentien), RBI (5th, between Balentien and Murata), total bases (216, 9th, between Murata and Aoki) and slugging (4th, after Balentien, Hisayoshi Chono and Hatakeyama). He again failed to make the Best Nine; Murton, Chono and Aoki were picked instead.

The Caracas native signed with the Yokohama BayStars following the 2011 campaign. He hit .300/.333/.473 with 25 doubles and 19 home runs in 2012, putting him on the leaderboard for average (6th, between Lastings Milledge and Shingo Kawabata), hits (143, tied for 6th with Milledge), doubles (tied for 5th with Arai and Shota Kobayashi), home runs (5th), RBI (76, 3rd, behind Shinnosuke Abe and Balentien), slugging (4th, between Milledge and Hayato Sakamoto) and total bases (225, 5th, between Milledge and Wada). He was picked for his 8th All-Star team in 12 years in Japan. 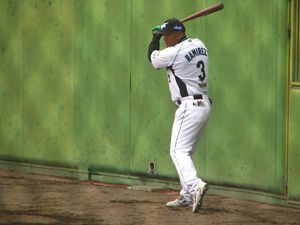 Ramirez practicing with the Pegasus in 2014.

Ramirez signed with the Gunma Diamond Pegasus of the independent Baseball Challenge League in 2014 and was a player-coach. He worked as an adviser for the Orix Buffaloes in 2015.

He became manager of Yokohama for 2016, replacing Kiyoshi Nakahata. He was the first Latino manager in NPB and the first foreigner since Marty Brown in 2009. He was 69-71-3 his first year at the reigns but led Yokohama to their first playoff spot in 18 years. He took the team to the 2017 Japan Series, where they fell to the dynastic Softbank Hawks in six games. The club fell to 67-74-2 in 2018, rebounded to 71-69-3 and the playoffs in 2019 and fell again to 55-58-6 in 2020. He then stepped down and was replaced by Daisuke Miura but the decline continued.