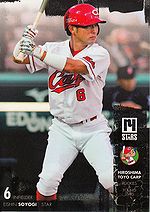 Eishin Soyogi is a former Rookie of the Year in Japan.

Soyogi played for Nissan Motors in the industrial leagues after finishing college. He represented Japan in the 2005 Baseball World Cup, hitting .333/.478/.333 with 2 steals in 4 tries. He made no errors as the country's primary shortstop in the event.

Soyogi was picked in the third round of the 2005 draft by the Hiroshima Carp. He became the first Carp player to make his pro debut on Opening Day since Koji Yamamoto back in 1969. Soyogi was the Opening Day starter at second base and singled off Kenshin Kawakami in the 6th inning for his first hit. On April 27, the same day he attended his grandfather's funeral, Soyogi hit his first homer, off Masumi Kuwata. For the 2006 season, he hit .289/.332/.422 with 78 runs. He led the Central League with 8 triples and was named the CL's Rookie of the Year.

Soyogi adjusted his swing for 2007 to generate more power, smacking 18 homers, impressive for a shortstop. He also stole 20 bases in 26 tries. His average fell, though, and his batting line of .260/.330/.418 led to a slightly lower OPS than in '06. He finished 5th in the CL in steals and tied for third with 4 triples.