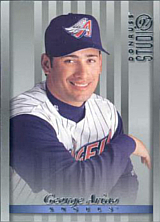 Arias signed with the Orix Blue Wave in 2000, staying two years and becoming an instant fan favorite. He displayed great power with the Blue Wave, hitting 26 then 38 bombs in his time there. With Japanese teams rarely satisfied with gaijin (foreign) players, he was let go after the 2001 season. Arias signed with the Hanshin Tigers, arguably Japan's most popular baseball team at the time, for 2002. There, he became a bigger success, batting .258/.317/.526 with 32 homers and 82 RBI his first year, earning election to his first All-Star squad. He was third in the Central League in home runs, though a good distance behind Hideki Matsui (50) and fellow gaijin Roberto Petagine (41). He led the CL with 6 sacrifice flies. He followed that with another solid year in 2003, batting .265/.334/.565 with 38 bombs and 107 RBI and making another All-Star squad, as well as his lone Best Nine and Gold Glove selections (as a first baseman). He helped lead the Tigers to the Japan Series for the first time in 18 years, serving as the cleanup hitter and only player with more than 20 homers. He was second to Alex Ramirez in RBI in the Central and third in home runs, two behind Ramirez and Tyrone Woods. His offense declined slightly in his last year with the Tigers, as he batted 'only' .271/.326/.522 with 25 homers and 84 RBI. A free swinger, he fanned over 100 times each season in Japan.

After leaving Japan, Arias signed a minor league contract with the newly minted Washington Nationals for 2005. He batted .265 (5-for-19) with no home runs and one RBI in spring training and was let go. Following that, he joined the Tijuana Colts of the Mexican League, batting .303/.384/.566 with 23 homers and 81 RBI, helping lead the team to the second-half title in the northern division after Randall Simon departed Mexico for Japan. Arias started the 2006 season with the Tijuana Colts, driving in 71 runs in 81 games and homering 19 times while batting .280/.354/.520. In late June that year, he signed with the Yomiuri Giants to fill in for the injured Hiroki Kokubo at third base. The veteran was clear not up to hitting NPB anymore, hitting .167/.219/.300 in 17 games before being sent to ni-gun about a month later and never making it back up to Yomiuri.