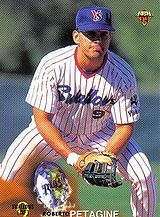 Roberto Petagine was a big star in Japan and in the U.S. minors who also played seven seasons in the U.S. major leagues. His tenure in the major leagues was marked by low batting averages but many walks and good power. In 1993, he led the Texas League with a .334 batting average, 84 walks, and .442 on-base percentage, to take the first of three minor league MVP titles.

Petagine signed with South Korea's LG Twins in 2008. In 2009 he was elected to the International League Hall of Fame.