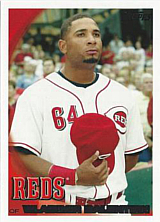 Wladimir Balentien is a former major leaguer who played in the 2004 Olympics and 2013 and 2017 World Baseball Classic. He beat up minor league pitching at the Triple A level, made his major league debut in 2007 and became a home run star in Japan, winning home run titles his first two years before setting the all-time Nippon Pro Baseball single season record in 2013.

Balentien was signed out of Curacao by scout Karel Williams for the Seattle Mariners in July 2000, shortly after his 16th birthday. The next two years, he was in the Venezuelan Summer League. In 2001, he batted .206 with 9 homers for Aguirre (VSL).

Back with Aguirre the next season, Wladimir hit .279/.390/.538 and led the VSL with 10 homers, winning the league MVP award. In the playoffs, he hit a 2-run homer in the final game and was also named MVP of the championship series. He was named to the league's All-Star team at DH. In 2003, the teenager was smacking long balls for the AZL Mariners, hitting .283/.363/.658 with 16 homers, 42 runs and 52 RBI in 50 games, striking out 55 times in 187 at bats. Baseball America named him the Arizona League's 2nd best prospect after Chris Lubanski. Balentien broke the AZL home run record of 13, set by Luis Garcia four years prior and made the AZL All-Star team at both outfielder and DH. His 14 outfield assists led the loop, as did his 33 extra-base hits and slugging percentage. He was second in RBI, 3 behind Lizahio Baez.

Balentien played his first season in A ball in 2004. He hit .277/.315/.519 for the Wisconsin Timber Rattlers, cracking 15 homers in 76 games, and batted .289/.357/.474 in 10 games with the Inland Empire 66ers. Baseball America ranked him the 11th-best Midwest League prospect. He missed time to represent The Netherlands in the 2004 Olympics but only hit .133 in six games for the 2-5 club. Splitting left field with Johnny Balentina, his only hits came against the host Greek national team, including a homer off Laurence Heisler. Wladimir returned to Inland Empire in 2005 and had a huge year. He led the Mariners chain in total bases (272), doubles (38), home runs (25), slugging (.553) and strikeouts. He hit .291/.338/.553 while tying Billy Butler for 5th in extra base hits in all of the minor leagues, though he was also fifth in strikeouts. He did not make the California League All-Star team, lead the league in anything or get named as a top prospect by Baseball America.

Balentien hit 22 homers and drove in 82 in 2006 but struggled otherwise, only putting up a .230/.337/.435 line for the San Antonio Missions in Double A. Still just 21/22, he was hampered by 140 strikeouts in 444 at bats. He led Texas League outfielders in assists (17) and double plays (6) but also in errors (11), showing a strong but erratic arm. Baseball America rated him the 20th best prospect in the TL and having the best outfield arm in the league. He played for the World team in the 2006 Futures Game at DH and starred, going 2 for 3 with a double, though the USA beat his outfit 8-4. He hit .268/.342/.572 in the winter leagues for the Lara Cardinals, tying him for second in the Venezuelan Winter League in homers (9). He worked on hitting more singles and doubles over the winter as well as cutting down on his temper and opened 2007 with the Triple A Tacoma Rainiers with hits in 17 of his first 18 games, batting .380 with 5 home runs. Balentien continued his hot hitting and delivered a dramatic blow on May 2. With the Rainiers down 3-2 in the bottom of the 9th, they loaded the bases with two outs. On a 3-1 count, Wladimir hammered a blast over the left-field wall for a walk-off grand slam. Overall, Balentien batted .291/.362/.509 with 24 homers and 84 RBI as well as stealing 15 bases in 19 tries. He tied for 10th in the Pacific Coast League in home runs. In the 2007 Futures Game, Balentien hit third for the World team and played right field. He went 1 for 3 with 2 RBI and a double in the World's 7-2 win.

Signing with the Yakult Swallows for 2011 to replace Aaron Guiel, Balentien debuted as their Opening Day right fielder. He went 1 for 4 with two strikeouts as the 6th place hitter in a loss to the Yomiuri Giants. It was a hit-or-miss year as he made the Central League All-Star team and hit .228/.314/.469 with 31 home runs and 131 strikeouts. He had the lowest average of any batting title qualifier yet led the CL in dingers (8 more than runners-up Alex Ramirez and Kazuhiro Hatakeyama). He was 8th in the CL in runs (63, between Shuichi Murata and Keiichi Hirano), 9th in doubles (22), 4th in RBI (76, between Hatakeyama and Ramirez), tied for 5th in total bases (228, even with Hayato Sakamoto), led in strikeouts (23 more than runner-up Josh Whitesell), was 5th in walks (61, between Masahiko Morino and Norichika Aoki), tied for third in sacrifice flies (6) and led in slugging (.001 over Hisayoshi Chono).

In 2012, he hit .272/.386/.572 with 31 home runs and 81 RBI despite missing almost a month. He again won the CL home run crown (4 ahead of Shinnosuke Abe), was second in RBI (23 behind Abe), was 8th in total bases (202), ranked 4th in strikeouts (92, between Chono and Takashi Toritani) and was 5th in walks (64, between Abe and Yoshinobu Takahashi). Had he qualified, he would have led in slugging by 7 points over Abe. He was again a CL All-Star and joined Chono and Yohei Oshima as the Best Nine picks in the outfield. He finished 11th in voting for the 2012 Central League Most Valuable Player Award.

In the 2013 World Baseball Classic, Balentien helped the Dutch squad surprisingly make it to the final round, finishing 4th overall, ahead of Cuba, South Korea, Venezuela, Mexico, Canada and other more historic baseball powers. Wladimir hit cleanup and played right field, batting between Roger Bernadina and Andruw Jones. For the tournament, he hit .304/.360/.435 and failed to homer in 7 games. His three doubles tied him for 4th behind Nelson Cruz, Carlos Beltran and Robinson Cano while his 5 RBI were one behind team co-leaders Andrelton Simmons and Jonathan Schoop. In the Netherlands' semifinal loss to the Dominican national team (the eventual champions), Balentien grounded in Simmons in the first against Edison Volquez to put the Orange ahead but they would not score again. He fanned against Volquez in the 4th, doubled off Kelvin Herrera in the 6th and grounded out against Pedro Strop in the 8th.

He had an absolute whale of a season for the Swallows in 2013, hitting 50 homers by the end of August and threatening the great Sadaharu Oh's single-season record of 55, dating back to 1964 (which had been later tied by Tuffy Rhodes and Alex Cabrera, both of whom were walked by Oh's club when they had chances to surpass him). The power performance was not part of an excessively homer-happy season around Japan either, though the league had gone to a much more hitter-friendly ball, as the next best power hitter at that point was Tony Blanco with 35. He tied the Oh-Rhodes-Cabrera mark on September 11th by going deep off Kan Otake, then set a new record on September 15th when he went deep twice in a game against the Hanshin Tigers, hitting homers off Daiki Enokida both times. A street in Curaçao was renamed in his honor shortly thereafter and the Dutch embassy in Tokyo had a ceremony honoring him. He finished the season with a batting line of .330/.455/.779, 60 home runs, 94 runs scored, 131 RBI and 103 walks in 130 games. He was among the CL leaders in average (2nd, .003 behind Blanco), OBP (1st by .028 over Shinnosuke Abe), slugging (1st, .145 ahead of Blanco), OPS (1st by 185 of Blanco), runs scored (1st, 12 more than Yoshihiro Maru and Chono), hits (145, 7th, between Sakamoto and Tsuyoshi Nishioka), home runs (finishing 19 ahead of runner-up Blanco and 28 ahead of #3 Abe; everyone else had less than half), RBI (2nd, 5 behind Blanco), walks (2nd, one behind Toritani) and total bases (342, 1st by 38 over Blanco). He joined Matt Murton and Chono as the CL outfield Best Nine picks. He also won the 2013 Central League MVP, getting 200 of 273 first-place votes; his 1,135 points were well ahead of Murata (419) and Abe (391) as he became the first MVP from a last-place team in NPB.

The offseason was a stormy one for Balentien; he and his wife of six years, Karla, decided to divorce, with custody of the couple's young daughter a contentious issue. On January 13, 2014, he was arrested in Miami, FL and charged with false imprisonment and battery after an incident the previous day in which he broke into the couple's house after his wife refused him access and physically threatened Karla. He continued to smoke the long ball with Yakult, hitting 30+ in six of the next seven seasons with a best of 38 in the 2018 season. Following the 2019 season, he signed with the Fukuoka SoftBank Hawks.