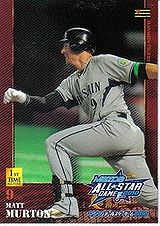 Matt Murton played five seasons in the major leagues and had a lifetime major league batting line of .286/.352/.436 with a OPS+ of 100. In 2010, he went to Japan and broke a record held by Ichiro Suzuki. His brother Luke Murton has also played pro ball.

Murton was born in Florida but went to high school and college in Georgia. He hit .385 as a college freshman at Georgia Tech, third in the Atlantic Coast Conference. Baseball America named him second-team freshman All-American at DH. Matt fell to .344 with 20 steals as a sophomore. He starred in the 2002 College World Series - in 13 at-bats, he had two doubles, four triples and four runs for a 1-2 team. He batted .301 with 19 steals, 13 homers, 64 runs and 56 RBI as a junior. The Boston Red Sox took him in the supplemental first round of the 2003 amateur draft, their second choice overall after David Murphy. Matt was the 32nd overall pick, a choice that was compensation for the loss of Cliff Floyd to free agency. Murton was signed by scout Rob English for a $1,010,000 bonus and made his pro debut that summer.

In 2003, Murton broke into pro ball with the Lowell Spinners, batting .286/.374/.397. Baseball America listed him as the #13 prospect in the New York-Penn League, between Chris Ray and Paul Maholm.

The next year, in 2004, he hit .301/.372/.452 with the Sarasota Red Sox in Single A before being traded to the Chicago Cubs organization with Nomar Garciaparra in exchange for Francis Beltran, Brendan Harris, Alex Gonzalez and Doug Mientkiewicz. He fell to .253/.326/.367 in 24 games for the Daytona Cubs following the trade. Baseball America rated him as being the best hitter for average and possessing the best strike-zone judgment of any Cubs farmhand. He finished third in the Florida State League in average behind Danny Matienzo and Aarom Baldiris. He joined Ron Davenport and Félix Pie as the league's All-Star outfielders.

In 2005 in the Cubs system, he hit .342/.403/.498 with 18 steals in 23 tries in 78 games for the West Tenn Diamond Jaxx, .353/.421/.500 in 9 games for the Iowa Cubs and .321/.386/.521 in an excellent 51-game big league debut with the big league Cubs. Had he qualified, he would have led the Southern League in average. He joined Delmon Young, Jeremy Hermida and Jerry Owens as the SL All-Star outfielders. Baseball America ranked him as the SL's #12 prospect, between Scott Olsen and Bobby Jenks. In his big league debut on July 8th, Matt started in left field and hit 8th. He had a perfect day. In his first at-bat in The Show, he singled off Dontrelle Willis of the Florida Marlins. He walked his next time up and came around to score. He had a sacrifice fly to score Jeromy Burnitz in his third plate appearance. His fourth and last trip to the plate that game, he doubled off Randy Messenger. That winter, he batted .337 for the Mesa Solar Sox.

In 2006, he became the Cubs' regular left fielder at the age of 24, hitting .297/.365/.444 with 13 home runs and 70 runs, with a 104 OPS+. He was the youngest Opening Day left fielder for the Cubs since Rafael Palmeiro 18 years prior. On August 3rd, Murton hit four doubles, the first Cub to do that since Billy Williams in 1969. According to the similarity scores, Kirk Gibson was the most similar player at age 24 (all similarity score ratings are as of 2010).

Oakland dealt Murton to the Colorado Rockies for speedster Corey Wimberly over the off-season. He hit .250/.304/.404 in limited time for the Rockies in 2009 and .324/.389/.499 for the Colorado Springs Sky Sox. He was second in the 2009 Pacific Coast League in average behind John Bowker.

He signed with the Hanshin Tigers for 2010. On Opening Day, March 26th, he led off and manned center field for the Tigers. He was 1 for 3 with two walks to help them to victory. He wound up topping 200 hits, becoming the fourth player and first American in Nippon Pro Baseball history to reach that figure. He followed Ichiro Suzuki, Norichika Aoki and Alex Ramirez. Murton would go on to set the NPB single-season record with 213 hits, topping Ichiro's previous record of 210, though Ichiro played a 130-game schedule compared to the 144-game schedule now used by the NPB. His record-breaking hit was a single off rookie Masato Nakazawa of the Yakult Swallows. Shogo Akiyama broke his NPB hit record five years later, though Murton still held the Central League record at that point.

He had a 30-game hitting streak in 2011 to tie Isao Harimoto and Yutaka Fukumoto for the 4th-longest streak in NPB history. He broke Glenn Braggs' record for foreigners (29) and Shinjiro Hiyama's Hanshin record (28). Tetsuya Utsumi stopped his streak.