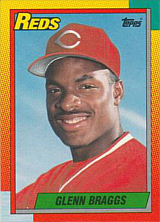 "Did you ever notice how many great baseball players have what could loosely be described as a Hack Wilson type body? Kirby Puckett once said that his fantasy was to have a body like Glenn Braggs'. Kirby was a short, squat man who didn't look like a baseball player. Braggs was about 6' 3", slender, fast, very graceful - and of course, not one-tenth the player that Kirby Puckett was." - Bill James, from The Historical Baseball Abstract

Glenn Braggs was signed as a 2nd round pick in the 1983 amateur draft by the Milwaukee Brewers, scout Dick Ehrig and Director of Player Procurement Ray Poitevint. He played seven years in the major leagues. Braggs possessed moderate power and could steal a base. He is the most successful hitter ever to come out of the University of Hawaii at Manoa.

Braggs was said to have a picture-perfect swing that many major leaguers admired. He was also known for occasionally breaking bats over his shoulder on his backswing, which he once did in front of a national audience during the 1990 World Series, much to the amazement of TV commentator Tim McCarver, although that wasn't the first time he had done that. His first big league two-home run game came on April 17, 1987 as a member of the Milwaukee Brewers. His first 4-RBI game was on June 2nd and his first 4-hit game on July 29th that same year.

In his first 21 at-bats as a member of the Cincinnati Reds in 1990, Braggs collected 9 hits, hitting .429. This included a 4-for-5 game against the Atlanta Braves. In another game against the Braves that year, his 9th-inning single won the game for the Reds, 4-2. He hit safely in his first 17 starts as a Red for a .379 batting average. In 1991, the Reds adopted "retro" sleeveless uniforms similar to those they wore in the 1950s. Braggs, known for his arm muscles, wore a cutoff T-shirt underneath, evoking Ted Kluszewski. In 692 games over seven MLB seasons, Glenn batted .257 with 70 home runs and 321 RBI.

Braggs had a 29-game hitting streak in NPB with the Yokohama DeNA BayStars, which was the record for a "gaijin" until Matt Murton topped him in 2011. In four seasons in Japan, Glenn was a .300 hitter with a .544 slugging percentage and 91 home runs in 404 games.

In 1993, he married singer Cindy Herron of the multi-platinum vocal group En Vogue. They have four children.