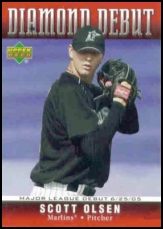 Scott Olsen was drafted by the Florida Marlins in the 6th round of the 2002 amateur draft. He was signed by scout Scot Engler and made his pro debut that summer.

Olsen was arrested in July of 2007 after a fight with police officers. He was charged with driving under the influence, resisting an officer with violence and fleeing and eluding a police officer, and was released on a $11,000 bond.