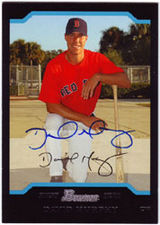 Outfielder David Murphy played three seasons at Baylor University, hitting .346 in 172 games. He broke his hand in the preseason in 2002 but recovered to hit .318. As a junior in 2003, Murphy led the Big 12 Conference in hits (121) and average (.413). He led NCAA Division I in batting average and made All-American picks from Baseball America and the American Baseball Coaches Association.

He then was selected by the Boston Red Sox in the first round of the 2003 amateur draft and was signed by scout Jim Robinson for $1.52 million. He made his pro debut that summer with the Lowell Spinners and hit .346/.453/.397 in 21 games with the club before being promoted to the Sarasota Red Sox, where he had a .242/.329/.307 line in 45 games. Baseball America rated him as the #6 prospect in the New York-Penn League.

He returned to Sarasota in 2004 but struggled with injuries, missing nearly two months of the season. He finished at .261/.346/.232. The next season he made the jump to the AA Portland Sea Dogs and hit .275/.337/.430 with 14 homers and a team-best 75 RBIs in 135 games. As the team's regular centerfielder, he made just 4 errors and was named the Red Sox Minor League Defensive Player of the Year.

David batted .280/.347/.423 in 100 games for Pawtucket in 2007. Murphy was then traded with Kason Gabbard and Engel Beltre to the Texas Rangers on July 31, 2007 for Eric Gagné. Just over three weeks later (August 23), Murphy played a big role in the first game in which an American League team scored 30 runs. David had 5 hits and scored five runs for Texas, leading them in hits that day and tying Jarrod Saltalamacchia for the lead in runs scored. He then earned a spot as the Rangers' regular right fielder in 2008, batting .275 with 28 doubles, 15 home runs and 74 RBI in 108 games. That solid production earned him a spot as an outfielder on the 2008 Topps All-Star Rookie Team, alongside the Twins' Denard Span and the Reds' Jay Bruce.

Murphy made the first pitching appearance of his professional career with a scoreless inning against the Boston Red Sox in a 17-5 loss by the Rangers on June 4, 2013. He was the only one of six Rangers pitchers against whom the Sox did not score, as they tallied at least a run in each of the first seven innings of the game, before Murphy shut them down in the 8th. He threw some rather slow fastballs and a few knuckleballs, striking out Mike Carp, who complained about the call and was ejected by umpire Andy Fletcher as a result. Murphy had pitched a bit in high school, when his pitching career was ended by a stress fracture in his elbow and he concentrated on hitting from that point forward. He had a disappointing year with the bat, as his average sank to .220 in 142 games, although his power remained at his established level, with 26 doubles and 13 homers. A free agent after the season, he signed a two-year deal with the Cleveland Indians on November 19th.

Murphy was put out on a highly unusual play on August 5, 2014, while playing for the Indians against the Cincinnati Reds. He was at first base when Yan Gomes hit a ball to the right field corner. As he ran towards third base, a second ball ended up on the field when one of reliever Jumbo Diaz's warm-up throws escaped from bullpen catcher Nilson Antigua and ended up in the outfield. When Murphy arrived at third base, even though coach Mike Sarbaugh who saw the whole thing was telling him to stay put, he saw the loose ball behind second base and made a break for home, not realizing that the game ball was in shortstop Zack Cozart's glove. Cozart immediately threw to third baseman Ramon Santiago, who tagged Murphy before he could return to the bag. Because the second ball's arrival on the field was purely accidental, the umpires let the out stand. He played 129 games for the Indians that season and was their primary right fielder. He hit .262 with 25 doubles, 8 homers and 58 RBIs, for an OPS+ of 99, slightly below average but a marked improvement on the previous season. In 2015, he increased his batting average for the Indians to .296, along with 12 doubles, 5 homers and 27 RBIs in 84 games before being traded to the Los Angeles Angels of Anaheim on July 28th in return for minor leaguer Eric Stamets. His OPS+ had improved to 115, but he did not have a regular position with Cleveland, splitting time between DH, left field and right field. In Los Angeles, he played 48 games, splitting left field duties with another trading deadline acquisition, Shane Victorino. He hit .265 on the West Coast to finish at .283 for the year, with 10 homers and 50 RBIs.

He signed a free agent deal to return to the Red Sox in 2016 but failed to make the team out of spring training and was released at the end of March. He caught on with the Minnesota Twins organization a couple of weeks later and played 0 games with the AAA Rochester Red Wings, where he hit .194 and was released again, bringing his playing career to an end.