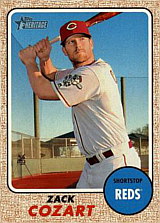 Zack Cozart was an All-Star infielder with the Cincinnati Reds in 2017. He is a veteran of nine seasons.

Cozart hit .430 in high school, including .450 as a senior. He was All-Metro in basketball, leading in three-pointers as a sophomore. Additionally, he played football in high school. He made an immediate splash in college, breaking Seth Smith's Ole Miss freshman record for total bases (110) and setting the school freshman runs scored record as well (53), hitting .281/.381/.476 for the year. In 2006, the sophomore put up a .338/.370/.515 line with 57 runs scored and 64 RBI in 66 games; he stole 15 bases in 18 tries. He was named All-SEC at short and led shortstops with a .975 fielding percentage. The ABCA named him second-team All-American behind Ryan Khoury. He hit .224 for Team USA's college edition, splitting shortstop with Todd Frazier, Darwin Barney and Brandon Crawford, as the US won the 2006 World University Championship. Cozart fell to .311/.389/.432 as a junior but again was named All-SEC at shortstop.

In his big league debut against the Milwaukee Brewers on July 7th, Zack went 1-for-3 and scored a run. Playing shortstop for the Reds, he hit safely in his first seven games. He claimed the starting job, but suffered a setback on July 23rd when he hyperextended his left elbow in a collision at second base in a game against the Atlanta Braves and was placed on the disabled list. He did not play again that season, ending the year with a batting line of .324/.324/.426 in 11 games. Healthy, Zack confirmed in 2012 that he had what it takes to be a major league regular, playing 138 games as shortstop while the team won a division title. He hit .246/.288/.399 in 561 at bats, the best part of his offensive game being his power, as witnessed by 33 doubles, 4 triples and 15 homers. Hitting at the top of the batting order despite his low OBP, he drove in only 35 runs, but scored 72. He went 5-for-21 against the San Francisco Giants in the NLDS, scoring two runs as the Reds lost in five games. After the season, he was named to the 2012 Topps All-Star Rookie Team.

On April 5, 2013, he had a great day against the Washington Nationals, hitting two homers for the first time in his career and driving in a personal best five runs in a 15-0 thrashing. He hit .254 in 151 games that season, with another 30 doubles and 12 homers, scoring 74 runs and driving in 33. While his OPS+ was below average at 82, the Reds were happy because he was still contributing with the bat in a number of areas and was playing good defense on an everyday basis. The Reds reached the postseason again in 2013, but were eliminated in the Wild Card Game against the Pittsburgh Pirates, with Zack going 0-for-3 with a walk. Cozart's offensive production took a big dip in 2014, as his batting average fell to .221 and his OBP to a terrible .268. His power, the most interesting part of his game, also fell significantly, as he was down to 18 doubles and 4 homers in 147 games. Despite good defensive play, it was hard to argue that he was helping the Reds at that level of production.

It seemed to be just a one year blip, as he hit much better in 2015. In 53 games, his average had bounced back to .258, his OBP to .310 and he had already hit 10 doubles and 9 homers, giving him an OPS+ of 108 and making him a very valuable component of the team. It all came crashing down on June 10th, as he took an awkward fall trying to avoid a tag while running to first base and tore ligaments in his right knee. He had to undergo surgery, his season over. He bounced back in 2016, hitting .252 in 121 games with 28 doubles and 16 homers, scoring 67 runs and driving in 50. His OPS+ was 92, below average but acceptable given his defensive contributions. He began the 2017 season red hot and was making a serious bid for participation in the All-Star Game after two and a half months, hitting .320 in 58 games with 9 homers and 33 RBI for a 148 OPS+. As had been the case in 2015, his season was interrupted by injury with a quadriceps strain in June. Despite the injury, he was voted starting shortstop for the Midsummer Classic, and journalists were happy to point out that, before the season, teammate Joey Votto - and fellow All-Star - promised him a donkey for his ranch in Brentwood, TN in the unlikely event he became an All-Star. Votto had no intention of reneging: he showed up on MLB Network dressed in a donkey suit to lobby fans to vote for his teammate. Votto made good on his promise and Cozart became the owner of a white-maned donkey which his son named Donald after his favorite cartoon character, Donald Duck. He finished the year with his best offensive numbers, hitting .297 with 24 homers and 63 RBI, also scoring 80 runs.

Following the season, Zack cashed in by signing a three-year contract with the Los Angeles Angels worth $38 million. He was expected to move to third base with the Halos, as defensive wizard Andrelton Simmons was not going to surrender the shortstop job. He was hitting .229 after 52 games in 2018 when Simmons was placed on the disabled list because of a sprained ankle on June 6th. The Angels immediately announced Cozart would move back to shortstop in his absence. on June 27th, it was Cozart's turn to head to the DL, as he underwent surgery to address persisting discomfort due to a torn labrum in his left shoulder. He had only played 6 games since Simmons' injury, and his batting average had fallen to .219 with 5 homers and 18 RBI when his season ended. When Zack bottomed out completely in 2019 (.124/.178/.144 in 38 games) and succumbed to shoulder surgery in July, the Angels packaged him and their first round pick in the 2019 amateur draft, Will Wilson, to entice the San Francisco Giants to simply take him away in December. A month later, the Giants released him.