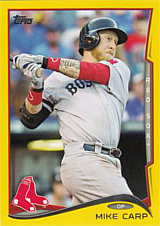 Mike Carp was drafted by the New York Mets in the 9th round of the 2004 amateur draft. He was signed by scout Steve Leavitt and began his pro career that summer. On December 11, 2008, he was traded to the Seattle Mariners as part of a blockbuster three-team trade also involving the Cleveland Indians. He made his major league debut for the Mariners at midseason in 2009, hitting .315 in 21 games. In 2010, he hit only .189 in 14 games and spent most of the year with the AAA Tacoma Rainiers, where he hit .257 with 29 homers and 76 RBI in 110 games. Carp was named the AL Rookie of the Month for August 2011. Playing for the M's after starting the season in Tacoma, he hit .313 with 8 doubles and 6 home runs, scored 15 runs and drve in 15 as he played first base regularly in the absence of the injured Justin Smoak. He had a 20-game hitting streak in late July and early August and finished the season with a .276 average, 17 doubles, 12 homers and 46 RBI in 79 games. While Smoak was still seen as the team's first baseman of the future, Carp seemed to have found a permanent spot as a left fielder and backup first baseman. His 2012 was set back by injuries and he only played 59 games, hitting .213 with 5 homers and 20 RBI. With Smoak also struggling and the offense too weak to support a decent pitching staff, the Mariners decided to re-tool at the corner spots, acquiring Mike Morse (among others) to re-vamp its attack. That left Carp a man without a country, as he was designated for assignment just as spring training opened.

On February 20, 2013, Carp was acquired by the Boston Red Sox for future considerations. With Mike Napoli set to play first base, he was competing with veteran Lyle Overbay to be a backup, although his ability to play left field as well made him a potentially useful spare part as Ryan Kalish, the most likely backup, was placed on the 60-day DL after undergoing shoulder surgery. Overbay was released at the end of spring, allowing Carp to make the team. On June 4th, Mike struck out on a knuckleball against outfielder David Murphy of the Texas Rangers, tossing mop up slop. He complained about the call and was promptly ejected by umpire Andy Fletcher, compounding the embarrassment. He finished the season with a batting line of .296/.362/.523 in 86 games with 9 homers and 43 RBI. He was used in all three rounds of the postseason, although he went a combined 0 fo 8. His only start came at first base in Game 2 of the ALCS against the Detroit Tigers on October 13th, facing Max Scherzer; he went 0 for 3 with a pair of strikeouts against the Cy Young Award winner, then in the 8th was replaced by pinch-hitter Mike Napoli after the Red Sox tied the score at 5 on David Ortiz's grand slam. In the World Series against the St. Louis Cardinals, he went 0 for 2 as a pinch-hitter but drove in a run batting for Jake Peavy in Game 3, his ground ball allowing Xander Bogaerts to score.

On April 24, 2014, he made the first pitching appearance of his pro career, mopping up against the New York Yankees with the Red Sox already down 13-5 in the 9th inning. Using mainly a knuckleball, he walked five batters but only gave up one run as he induced Brian McCann to ground into a double play; his last pitching appearance had been in high school. He was hitting .214 in 70 at-bats when he suffered a broken bone in his foot when hit by a pitch on May 27th, although the injury was not diagnosed for a couple of days. Carp was DFAed on August 1st, part of the Red Sox's complete roster overhaul around the trading deadline. He was hitting .198 with no homers and 9 RBI in 42 games. Two days later, he was claimed off waivers by the Texas Rangers, finishing his big league career by batting .125 in 17 games (40 at bats).