Jake Peavy is a right-handed starting pitcher who played for a number of major league teams. He was selected in the 15th round of the 1999 amateur draft by the San Diego Padres and signed with them on June 9th, 1999. Peavy developed into one of Major League Baseball's premier power pitchers, averaging nearly ten strikeouts per nine innings every season. He works primarily with a power fastball, a change, and a slider. Strangely, his talent has not carried over into the postseason, where he is 0-2 with a 12.10 ERA in two starts. 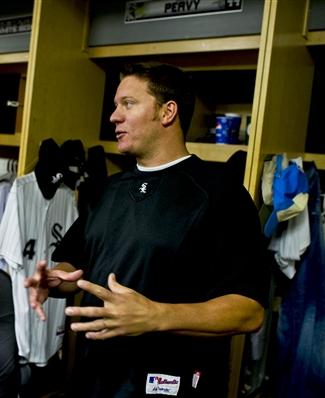 The Padres began to see flashes of Peavy's true brilliance in 2003. He posted a 12-11 record with a 4.11 ERA. In his first start of the season, Peavy fanned 11 Los Angeles Dodgers hitters in just five innings, he gave up one hit. He recorded 10 strikeouts in an August start against the Houston Astros. On August 8th, Peavy shut out the Cincinnati Reds for nine innings. He became a true ace in 2004. Limited to only 27 starts, the right-hander won 15 games and posted a magnificent 2.27 ERA. Peavy struck out 173 batters in 166.1 innings.

The Padres' ace was the starting pitcher for the National League in the 2007 All-Star Game. He pitched a scoreless inning and surrendered one hit. Peavy's record was 10-3 in the second half of the season, and the Padres' season came down to a one-game playoff against the Colorado Rockies. The game was played at Coors Field, and Peavy started for San Diego. October success eluded the Alabama native once again, as he gave up 6 runs in 6 1/3 innings. The Padres lost the game, 9-8, in 13 innings. Peavy's 2007 record was 19-6, his ERA was 2.54, and he fanned 240 batters. On April 25th, he struck out 16 opposing Arizona Diamondback batters, including 9 in a row between the 2nd and 4th inning, in a game the Padres lost, 3-2. The 9 consecutive strikeouts were one shy of the all-time record set by Tom Seaver of the New York Mets in 1970. He was awarded the 2007 National League Cy Young Award in November.

Peavy's record fell to 10-11 in 2008 as the Padres fell out of contention, but he still posted a solid 2.85 ERA and 166 strikeouts in 173 innings. In the off-season, he was almost traded to the Chicago Cubs but the deal fell through at the last minute, although it was clear that his days with the rebuilding Padres were numbered. He was one of the starting pitchers for Team USA in the 2009 World Baseball Classic, but was hit by the injury bug during the regular season. He made only 13 starts for the Padres in 2009, going 6-6, before the trade everyone expected was consummated. At the trading deadline on July 31st, he was sent to the Chicago White Sox in return for youngsters Clayton Richard, Aaron Poreda, Adam Russell and Dexter Carter. He had been on the disabled list since June 8th at the time, and did not return to action until September 19th, which explains why he did not end up with a contending team. Still, he pitched extremely well when he finally took the mound for the White Sox, winning all three of his starts with a 1.35 ERA while giving up only 11 hits in 20 innings.

Peavy was back with the White Sox in 2010. He made 17 starts early in the season, with a record of 7-6, 4.63 and recorded his first shutout since 2005. However, on July 6th, he was taken out of a game after experiencing pain. The next day, he was diagnosed with a detached muscle in the back of his throwing shoulder, a condition that would make him miss the remainder of the year.

He was off to another good start in 2013, with a record of 6-2 after 9 starts, when he had back-to-back nightmarish starts on May 30th and June 4th. He gave up 6 runs both games, twice being charged with losses, and saw his ERA jump from 2.97 to 4.30 as a result. Worse, after the second game, he was diagnosed with a non-displaced rib fracture on his left side, which explained why he had been pitching in serious discomfort. The only cure was rest. The injury kept him out until late July, but he returned with two solid starts before the trading deadline, winning both, and on July 30th was sent to the Boston Red Sox in a three-team trade that saw SS Jose Iglesias go from Boston to the Detroit Tigers and OF Avisail Garcia head from Detroit to Chicago. Reliever Brayan Villarreal went from Detroit to Boston, while the Red Sox sent three minor leaguers to Chicago to round out the deal. He was a winner in his first start for the Red Sox on August 3rd, defeating the Arizona Diamondbacks, 5-2. He ended up going 4-1, 4.04 in 10 starts for the Red Sox to finish with a combined mark of 12-5, 4.17. He made one start in all three rounds of the postseason, getting a no-decision in Game 4 of the ALDS against the Tampa Bay Rays, then being beaten up for 7 runs in 3 innings in a 7-3 loss to the Detroit Tigers in Game 4 of the ALCS. In the 2013 World Series, he started Game 3 against the St. Louis Cardinals on October 26th, leaving with a no-decision after giving up 2 runs in 4 innings. The Red Sox lost that game, 5-4, but won the Series in 6 games as Peavy ended up with a championship ring.

He was back with the Red Sox at the start of the 2014 season, but struggled badly in the first half. His record stood at only 1-9, with a 4.72 ERA in 20 starts, when he was sent to the San Francisco Giants in a July 26 trade. The Red Sox were in last place in the AL East by then, while San Francisco was battling the Los Angeles Dodgers for the NL West lead. In his first start for his new team on July 27th, he lost to the Dodgers, however, 4-3, giving up 3 runs in 6 innings. On August 30th, he recorded the 2000th strikeout of his career in a game against the Milwaukee Brewers in which he did not allow a hit until Mark Reynolds singled with one out in the 8th; he retired one more batter before leaving and got credit for the 3-1 win. He went 6-4, 2.17 in 12 starts for the Giants to finish the season with a combined record of 7-13, 3.73. For the second straight year, he won a World Series ring, as the Giants defeated the Kansas City Royals in the Fall Classic. That said, his postseason was not great, as he won only one of four starts and lost twice in the World Series with a 12.79 ERA. The Giants were happy with his contribution however, as they re-signed him for two years after the season.

Peavy had to wait until July 18th to record his first win of the year for the Giants in 2015. He lost his only two starts in April, then went on the disabled list with back pain until the beginning of July. He then lost his first two starts after his return. On September 16th, he beat the Cincinnati Reds, 5-3, to improve to 7-6 and also hit the third homer of his career off Collin Balester, his first since 2006. He finished the year at 8-6, 3.58 in 19 starts. He was off to a slow start in 2016 when on June 12th, he recorded a milestone win, the 150th of his career, in defeating the Los Angeles Dodgers and 19-year-old Julio Urias, 2-1, working six shutout innings.

Away from the diamond, Peavy is a dedicated musician who is also a huge fan of the rock band, called "NEEDTOBREATHE" (in all-caps and in one word). The group practices on Peavy's property, the Southern Falls Plantation in Alabama, and has recorded there, with Peavy contributing some guitar chords and back-up vocals. The band's song "The Outsiders" was the unofficial theme song of the Red Sox's run to a World Series title in 2013.