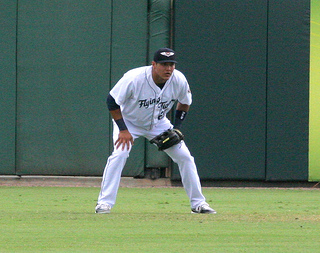 Oufielder Avisail Garcia reached the majors with the Detroit Tigers in 2012.

Garcia was signed by the Tigers in 2007 (the scouts were Alejandro Rodriguez and Pedro Chavez) and made his pro debut the following year with the VSL Tigers, hitting .298/.342/.449 with 7 home runs and 34 RBI in 63 games. He was among the Venezuelan Summer League leaders in home runs (tied for 4th with Quintin De Cuba, Luis Alvarez and Rogelio Noris), total bases (110, tied for 4th with Marco Yepez), slugging (5th, between Noris and Henry Henry) and hits (73, tied for 5th). He was named the VSL Tigers Player of the Year.

Garcia returned to Lakeland in 2011, hitting .264/.297/.389 with 11 homers and 56 RBI. His BB/K rate got even worse with 18 walks to 132 strikeouts. He was third in the Florida State League in strikeouts, trailing only Wade Gaynor and Daniel Fields. Baseball America ranked him as the 10th-best Detroit prospect and as having the best arm of any minor leaguer Tiger outfielder. He was 3 for 12 with 3 runs for Anzoategui that winter.

Garcia was injured at the start of the 2013 season and only played his first game for the team on May 14th, after a short rehabilitation outing for Lakeland. However, he was not particularly sharp in Detroit, hitting only .241 in 30 games, with 2 homers and 10 RBI. He was sent down to the minors in early July, getting his first taste of AAA ball with the Toledo Mud Hens where he found his hitting stroke. He was hitting a scorching .382/.414/.549 in 32 games when the Tigers traded Garcia to the Chicago White Sox on July 30th, in a three-team deal that netted them SS Jose Iglesias from the Boston Red Sox. He hit .304/.327/.447 in 42 games with the White Sox, with 4 doubles, 5 homers and 21 RBI, claiming the starting right field job for himself. He was the Opening Day starter for the Sox at the position in 2014 and on April 8th had a 4 for 5 game with his first two homers of the season in a game against the Colorado Rockies. The next day, however, he attempted to make a diving catch on a sinking liner hit by the Rockies' D.J. LeMahieu, but plowed his left shoulder into the ground, tearing his labrum. He had to undergo surgery, and it seemed his season was over, but he did come back in mid-August and eventually played 46 games, hitting .244 with 7 homers and 29 RBI.

He was finally healthy at the start of the 2015 season and started the year hitting very well. By going 7 for 12 with 6 RBIs in a three-game sweep of the Oakland Athletics on May 15-17, he raised his batting average to .346, second in the American League and was even able to lift his OPS above that of teammate Jose Abreu. His 45 hits at the point were already more than he had had in 2014. Along with the comparisons to countryman Miguel Cabrera which he had earned since reaching the big leagues with the Tigers in 2012, he was also being compared with Bo Jackson because of his tremendous speed and athleticism on a body the size of a typical NFL running back. He finished the 2015 season at .257 with 13 homers and 59 RBIs in 148 games, disappointing numbers considering his strong start. In 2016, he had a similar season, hitting .245 with 12 homers and 51 RBIs in 120 games.

On April 14, 2017, he was part of a historic starting line-up for the White Sox against the Minnesota Twins, as all three outfielders were named "Garcia". Alongside Avisail in right field were Leury Garcia playing center and Willy Garcia making his major league debut in left. He had the best average in the American League in April, hitting .368 and kept it up over the next two months to be named the White Sox's representative at the 2017 All-Star Game. He had a spectacular game on September 14th when he went 5-for-5 and drove in 7 runs to lead Chicago to a 17-7 win over his old team, the Tigers. He completed what was his best season by a wide margin with a .330 average, 18 homers and 80 RBIs in 136 games. He also scored 75 runs, had 171 hits, and an OPS+ of 138. However, he was not able to sustain that level of production in 2018 as he fell back to .236 in 93 games, even though he set a career best with 19 homers. However, he had just 49 RBIs, his OBP fell from .380 to a dismal .281 and his OPS was just 96. He underwent arthroscopic surgery on his right knee in late April, forcing him to miss two months of action.

Garcia was a free agent after the 2018 season, but given that he was coming off a poor year, and that he had only played up to his tremendous potential one year in the past five, there was not a lot of interest in his services, including from the White Sox who had decided to move on. On January 18, 2019, he reached a conditional one-year deal with the Tampa Bay Rays. He was guaranteed $3.5 million and could earn up to $6 million if he managed to play regularly. t turned out to be a great move for the Rays, as Avisail became a regular with one of the best teams in the American League, splitting his time between right field and DH. On May 28th, he was gifted a home run by Toronto Blue Jays RF Randal Grichuk, as leading off the 3rd inning, he hit what appeared to be a routine fly ball, only to watch Grichuk lose it against the backdrop of Tropicana Field's roof. The ball landed behind Grichuk and bounced to the right field corner, while Garcia circled the bases easily for an inside-the-park homer.